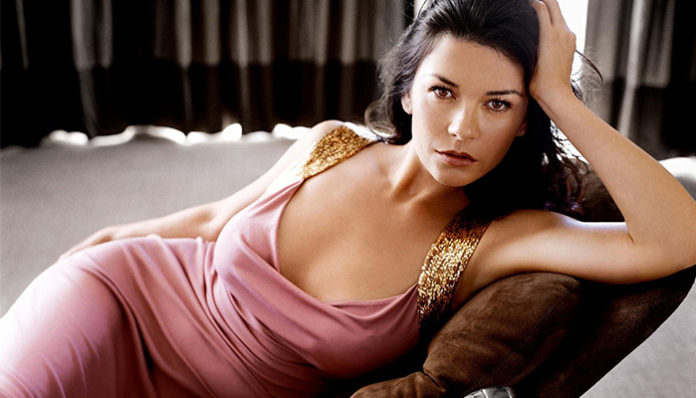 Hailing from the city of Swansea, Welsh actress Catherine Zeta-Jones is best known for her portrayals in the films Traffic (2000), and Chicago (2002). A natural performer, she took up dancing lessons when she was just four years old. As a teen, she quit school in lieu of joining a musical tour. Continuing to put herself out there on-stage, she eventually landed a lead part in the musical, 42nd Street when she was 17. Later transitioning to television, Zeta-Jones made her on-screen debut in the drama series, The Play on One (1991). From there, it wasn’t long until she landed a main role in the 1991 British comedy, The Darling Buds of May. In search of further opportunities, the actress made the move to the entertainment central of L.A. in the mid 1990’s. Over the next few years, she starred in a handful of TV films and specials including The Return of the Native (1994), Catherine the Great (1996), Titanic (1996). Little did she know that her role in Titanic would ultimately capture the attention of renowned film director and producer, Steven Spielberg.

Spielberg later recommended her to director Martin Campbell, who was working on a film called, The Mask of Zorro and awith that, Zeta-Jones soon found herself playing a lead part in the motion picture. A massive success in theatres, it raked in over $250 million, which catapulted the actress into stardom. The following year, Zeta-Jones starred in two high-profile blockbustersーEntrapment (1999), and The Haunting (1999). However, it was ultimately her stunning performance in Traffic (2000)ーa role which eventually earned her a Golden Globe Award nomination for “Best Supporting Actress”ーthat garnered her much recognition and fame. Throughout her professional career, she has accumulated seventeen industry awards, amongst dozens of nominations. As of 2016, she has taken on over thirty different roles as an actress.

A founding member of A Fine Romance, a charitable program that helps to raise funds for the Motion Picture & Television Fundーan organization that offers assistance to those working in the industry with limited resourcesーthe actress is also a member of the Cinema for Peace Foundation and an ambassador for the National Society for the Prevention of Cruelty for Children. Over the years, Zeta-Jones has made considerable donations to a number of charities including Noah’s Ark Appeal and the International Centre for Missing & Exploited Children. In 2001, she even auditioned off one of her outfits to help raise money for patients with AIDS in Africa.

So what has the actress of Welsh descent been up to in the recent years? Is she still active within the entertainment scene? If so, what are some of her latest on-screen roles? What happened to Catherine Zeta-Jones? Where is she now in 2018?

Catherine Zeta-Jones’ Childhood and Eventual Entry Into the Show Biz 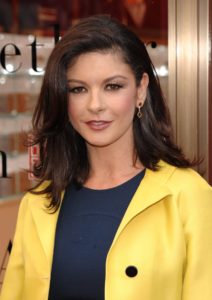 Born on September 25, 1969, in Swansea, Wales, Catherine Zeta-Jones is the daughter of Patricia Fair, a tailor, and David Jones, the owner of a sweets shop. The second oldest out of three siblings, she has two brothers named Lyndon and David. As a young girl, Zeta-Jones spent much of her childhood dancing at a local dance school; a natural on stage, she took part in a handful of school talent shows during her grade school days.

Eventually joining a performing dance group, she regularly travelled to London for multiple performances every year. At eight years old, Zeta-Jones began attending auditions for various theatre roles; her efforts paid off when she was cast in a London production of Annie the following year. Wanting to dedicate her time entirely towards her burgeoning career as an actress, she later quit school at fifteen to join a musical tour.

Shortly afterwards, she settled down in London where she enrolled herself in musical theatre classes at the Arts Educational School in Chiswick. At the age of seventeen, Zeta-Jones starred in  42nd Streetーas fate would have it, both the original actress and the understudy were not available, leading her to be able to snatch up the role. In 1990, the aspiring actress made her big screen debut in the French film, Le 1001 Nuits. Carrying on with her budding career, she later secured a recurring role in the series, The Darling Buds of May (1991). Pushing through her lack of initial success, she eventually went on to appear in Young Indiana Jones (1993), The Cinder Path (1994), Blue Juice (1995), Catherine the Great (1996), and The Phantom (1996). In 1996, she also starred in the CBS mini-series, Titanicーit was ultimately her portrayal in the show that caught the attention of famed film producer and director, Steven Spielberg. 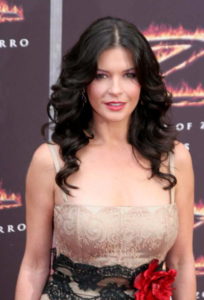 Recognizing her acting talents, Spielberg then recommended Zeta-Jones to Martin Campbell, a director who happened to have been working on a film, The Mask of Zorro (1998), for the former’s production company.

Based on a fictitious character created by Johnston McCulley, the movie revolved around a young thief who is hellbent on seeking revenge for the death of his brother; in his pursuits, he comes across Zorro, who is also looking for a type of vengeance of his own. Released in theatres on July 17, 1998, The Mask of Zorro was a critical successーearning over $22 million and peaking at number one during its opening weekend. Well-received amongst viewers and critics alike, the film garnered many praises for its spectacular stunt work and balanced use of special effects. Hailed as one of the best Zorro movies of all time, it eventually went on to gross over $250 million worldwide. While actors Antonio Banderas and Anthony Hopkins played the two male leads, Zeta-Jones was cast as Elena Monteroーthe daughter of one of the main characters. An extraordinary opportunity for the up-and-coming actress who was still trying to make a name for herself, her role in the film earned her much recognition.

Climbing in popularity, it didn’t take long for Zeta-Jones to land yet another starring role the following year in the caper film, Entrapment (1999). Directed by Jon Amiel, it centred around a female insurance agent who is tasked with having to help capture a notorious art thief. While the actress portrayed the role of Virginia Baker, the agent in question, actor Sean Connery played the role of professional thief, Robert MacDougal; other featured cast members include Will Patton, Ving Rhames, Maury Chaykin, Kevin McNally and Terry O’Neil. Opened in theatres on April 30, 1999 across the United States, Entrapment was a huge success; not only did it garner countless praises from critics, but it also managed to gross over $212 million from a production budget of $66 million. The film earned Zeta-Jones a Blockbuster Entertainment Award for “Favourite Actress – Action” and an European Film Audience Award for “Best European Actress” prior to the end of the decade.

With the arrival of the new millennium, the actress co-starred in the crime drama film, Traffic (2000). Based on a British television series from 1989, it depicted the darkness of the illegal drug tradeーfrom its politicians, users, traffickers and enforcers. Upon reaching four theatres on December 5, 2000, it grossed over $184,000 on its opening weekend; on the date of its nation-wide release in January 2001, it earned more than $15.5 million. Critically acclaimed, the powerful movie received an impressive four star rating from critic Roger Ebert, and has been described as being an “utterly gripping thriller” by major publications. In the film, Zeta-Jones portrayed the character of Helena Ayala. Hailed as one of the top movies of 2000, Traffic eventually raked in over $207 million by the end of its theatrical run. The winner of four Academy Awards, it also garnered the actress a Golden Globe Award nomination for “Best Performance by an Actress in a Supporting Role”.

In 2002, Zeta-Jones appeared as one of the female leads in the musical comedy, Chicago. Adapted from a musical of the same title from 1975, it revolved around two murderessesーRoxie Hart and Velma Kelly, both of whom find themselves fighting for fame while being on death row. Universally lauded, it took in over $170 million in the US and Canada alone; worldwide, it managed to gross more than $306 million. Commended by critics for its “surprising level of depth”, Chicago featured Zeta-Junes as none other than Velma while Renee Zellweger starred opposite of her, playing the role of Roxanne Hart. Aside from the two main stars, the film also featured appearances from Richard Gere, Queen Latifah, John C. Reilly, Christine Baranski, Taye Diggs and Colm Feore. Overwhelmed with positive reviews, Chicago received six Academy Awards nominationsーone of which was a win for Zeta-Jonesー, twelve BAFTA Award nominations, eight Golden Globe Award nominations, amongst a handful of others.

Fast forward two years, the actress once again crossed paths with Steven Spielberg in his comedy drama film, The Terminal (2004). Inspired partly by the real life story of Mehran Karimi Nasseri, it centred around a traveller named Viktor Navorski, who finds himself trapped at the John F. Kennedy Airport after being denied entry into the US, and denied a return back to his native country due to military coup. Released in the United States on June 18, 2004, The Terminal starred Tom Hanks, Stanley Tucci, Chi McBride, Diego Luna and Kumar Pallana; in it, Zeta-Jones played the role of Amelia Warren, a flight attendant. Well received upon hitting theatres, it also spawned an original soundtrack that went on to earn a perfect five out of five rating from Filmtracks. A major hit, the movie earned over $219 million during its theatrical runーmore than triple that of its production budget of $60 million. 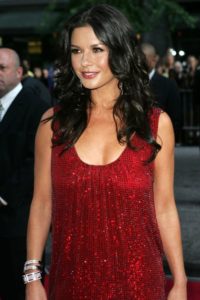 In 2017, Zeta-Jones will be starring in a new biographical drama series called Feud alongside Jessica Lange, Sarah Paulson, Stanley Tucci, Susan Sarandon and Judy Davis. Directed by Ryan Murphy, the series has been ordered by the FX Network for eight episodes; according to the actress’ IMDb page, she will be appearing in all eight episodes. Although an official release date has not yet been announced, it is known that the first season will revolve around the backstage battle between Bettle Davis and Joan Crawford in the film, What Ever Happened to Baby Jane?

Other than that, she also recently starred in the comedy war film, Dad’s Army (2016), where she played the role of Rose Winters. Also featuring Mark Tandy, Andrew Havill and Russell Balogh, it was released on February 5, 2016.

If you’d like to stay up-to-date and connected with the Welsh star, you can do so by following her on social mediaーyou can find Catherine Zeta-Jones on Instagram or Facebook at @catherinezetajones.