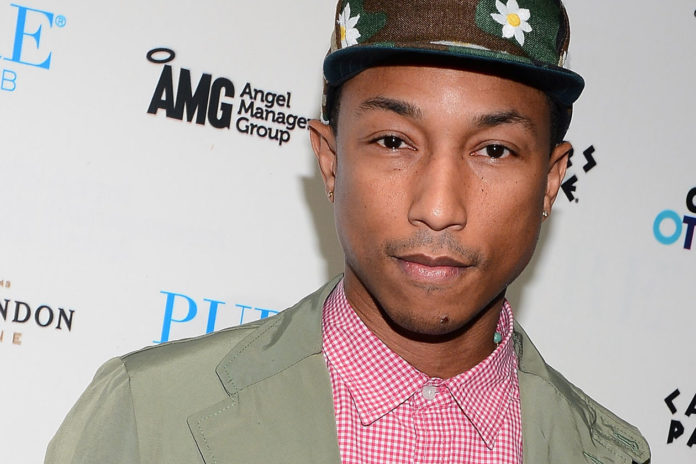 Pharrell Williams is a singer who’s one half of the R&B / hip hop production duo The Neptunes, and the one behind the infectious Despicable Me 2 soundtrack “Happy”. The Neptunes are hailed as among the best producers in the music scene while Williams himself was the recipient of more than 20 awards and a hundred nominations for his solo work. Outside of music Williams has partnered with many renowned names in the fashion industry for the creation of his own apparel collections.

Pharrell Lanscilo Williams was born in the city of Virginia Beach, Virginia, on April 05, 1973. At an early age Williams’ talent in music was evident and in his teenage years he joined the school’s marching band. To further sharpen his talent Williams was sent to a summer music camp by his parents when he was 12 years old. It was here where he met Chad Hugo and the two quickly became friends thanks to a common interest in making music.

The pair worked on songs for notable singers in the industry while performing in their band The Neptunes. They were spotted in a talent show by producer Teddy Riley who signed them up. Hugo and Williams continued their production work and they steadily gained popularity throughout the 90s and in the early 2000s.  In 1999 the pair formed the band N.E.R.D with Shay Haley and released four studio albums throughout the next decade.

In 2006 Williams released his debut album In My Mind which was met with mixed critical reception. His second album G I R L hit the shelves in 2014 which fared better than its predecessor. Williams also collaborated with several artists for their works like Adam Lambert, Mac Miller, Miley Cyrus, and many others.

In 2004 Williams and Japanese fashion designer Nigo created a line of sunglasses for Louis Vuitton. The pair then joined forces in 2005 and established Billionaire Boys Club and Ice Cream which are apparel and footwear brands respectively with branches all over the globe. Williams was once again summoned by Louis Vuitton in 2008 for the creation of the “Blason” jewelry collection in collaboration with the company’s creative consultant Camille Miceli.

In 2012 Williams launched “i am OTHER” which serves as a record label, creative collective, and a producer of several original web series. Two years later Williams released the “i am OTHER” collection for casual wear retailer Uniqlo, again with the help of Nigo.

Since 2009 Williams serves as the creative director of Bionic Yarn, a startup he co-founded with Tyson Toussant. The startup collaborated with Dutch designer company G-Star RAW in 2014 for a denim collection made from recycled plastic. Last year he became co-owner of G-Star. Also in 2014 he worked with French fashion house Moynat in the creation of zip leather pouches and resin bags, and in 2016 he worked with Adidas for the release of the “Hu” apparel and footwear collection.

Williams has made a handful of appearances in film and television. He performed in an episode of 90210 in 2009 and was a voice judge in 2015’s Pitch Perfect 2. He served as an executive producer of the 2012 documentary Migration is Beautiful and the 2015 film Dope.

Williams married model Helen Lasichanh in 2013 but they first welcomed their baby boy Rocket in 2008. Williams stated in an interview that he was first friends with Lasichanh as she was still in another relationship back then and he had to wait until she was single before he asked her out. 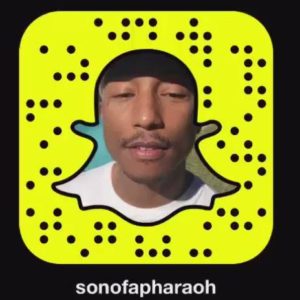 On February 06, 2016, Williams tweeted his Snapchat username, and yes he is indeed a son of a pharaoh as his father’s name is Pharaoh. Click here to add Williams to your Snapchat friends list.

Pharrell Williams’ Kik Username or Code – Williams does not have a Kik account as of 2017. If he ever decides to get one we’ll update this page so stay tuned. For now be wary of “Pharrell Williams” accounts on Kik as they are most probably fanmade or posers.