What Happened to The Gorillaz – The Group Now in 2018 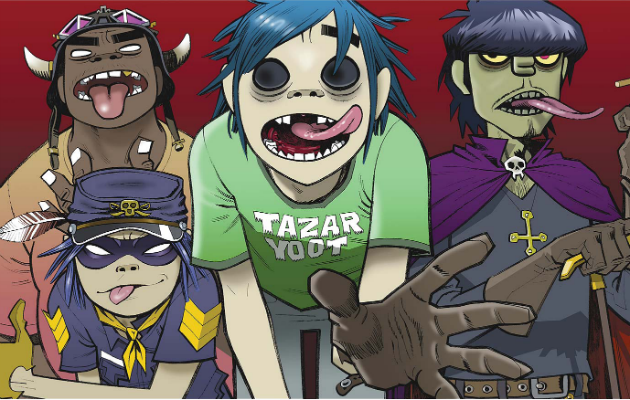 Fans of The Gorillaz have known they’ve been working on an album for a few years now. Others forgot about the group until they released “Hallelujah Money”, their first single in several years, and are now wondering what they’ve been up to since the release of The Fall back in 2011.

Damon Albarn and Jamie Hewlett before The Gorillaz

Damon Albarn and Jamie Hewlett, the duo behind the “virtual band” The Gorillaz first met in 1990, when the two already had impressive careers

Albarn had already reached #8 in the UK Singles Chart with his band Blur’s “There’s No Other Way”. Hewlett’s Tank Girl comics were popular throughout the UK. The two first met in 1990 and didn’t really get along. Despite that, they ended up living together in 1997, and I guess they ended up watching a little bit too much MTV.

Hewlett and Albarn first had the idea for the Gorillaz when they were watching MTV. They realized that there was no substance that developed, even if you watched it for hours on end.

In later interviews, Albarn would credit Blur’s “On Your Own” as a Gorillaz track. The duo’s first official release was in 1998 was as Gorilla, with “Ghost Train”. For a full album, Albarn and Hewlett pulled together quite a few musicians, including Del the Funky Homosapien, Kid Koala, and Dan the Automator.

As the Gorillaz, their first release wasn’t until 2001, when they released “Clint Eastwood”. At this point, it becomes imperative to highlight that the Gorillaz, as a band, are not Damon Albarn and Jamie Hewlett. The Gorillaz are four animated characters: 2D, Murdoc Niccals, Noodle, and Russel Hobbs. These characters aren’t the personas of any of the musicians in the project, they’re fictional characters. These days, that means they’re called a “virtual band”.

And overnight, they were easy the most popular virtual band. “Clint Eastwood” hit #4 on the UK Singles Chart. A month later they released their first album, Gorillaz.

The group released Phase One: Celebrity Take Down, a DVD with the four music videos, in November 2002, and that was the end of Phase One. There were rumors that Albarn and Hewlett would produce a Gorillaz movie, but the duo made it clear they would have to wait until they could finance the film themselves.

In late 2004, the Gorillaz began Phase Two. They released a single, “Rock It” through their website. Then in May 2005, they released Demon Days, which debuted at #1 on the UK Albums Chart. Shortly after they released “Feel Good Inc” as the second single, and by the end of the year released “Dirty Harry” and “Kids With Guns”/”El Mañana”.

Demon Days has been an incredibly popular album ever since its release. The Gorillaz were nominated for “Best British Group” and “Best British Album” at the 2006 Brit Awards, and over the next couple years, worked out how to use holograph technology to put on concerts with the virtual band.

They used these homographs for the first time at the MTV Europe Music Awards, and again at the 2006 Grammy Awards. By the end of the year, Phase Two: Slowboat to Hades came out, which was  the second DVD of music videos. They also released an autobiography, Rise of the Ogre, and announced that they were working with Terry Gilliam to put out a movie. At the same time, they announced that they were finished releasing pop music.

Both of these announcements were wrong.

About a month after Damon Albarn announced the Gorillaz wouldn’t release more pop music, he made another announcement saying he was making the “biggest and most pop record [he’s] ever made,” with the group.

The next album was a long time coming. The first single was released in January 2010, and it wasn’t until March that Plastic Beach dropped. The album debuted at #2 in the UK and in the US. Critics were clearly appreciative of the work Albarn and his collaborators put into the piece. It was highly praised for its ambition and follow-through. Other critics were more aggressive, saying the album sounded more like Albarn goofing off in the studio than producing an album.

Even though those comments were a small minority of total reviews, it looks like Albarn took them to heart. In October 2010, they released “Doncamatic”, a single, and on Christmas Day, they released their fourth album, The Fall.

The Fall was recorded on Albarn’s iPad during the tour for Plastic Beach, and as much as I love the Gorillaz, it showed. The album wasn’t nearly as popular as their previous releases, and critics were generally underwhelmed.

Over the next few years, the Gorillaz released a few more track but generally slowed down their release schedule. There was a brief panic that the group would end in April 2012, when Damon Albarn revealed that he and Jamie Hewlett were having artistic disagreements. These fears were put to rest the following summer when Hewlett said that he was definitely planning on working with Albarn to release a follow-up to Plastic Beach.

Over the past few years, Albarn and Hewlett have given us a lot of teasers about the next Gorillaz album. They were open about the project in interviews and even uploaded clips of them working in the studio to their Instagram.

Last September, the group completely redid their website and social media presence, emphasizing the fictional history of the group. Noodle, the fictional guitarist and backup singer, became the brand ambassador for Jaguar Racing.

On January 17, 2017, the group released their first single since 2012: “Hallelujah Money”. The song, featuring Benjamin Clementine, is a return to form for the group, much more similar to the songs on Demon Days or their eponymous debut than anything on Plastic Beach or The Fall.

The music video was released two days later, on January 19, which many took to be a commentary on the inauguration of President Donald Trump.

Albarn has said that the new album will come out sometime this year, but we don’t have any details about when it will be released. The group has released albums without a consistent schedule, so there’s not even any way to give a good guess.