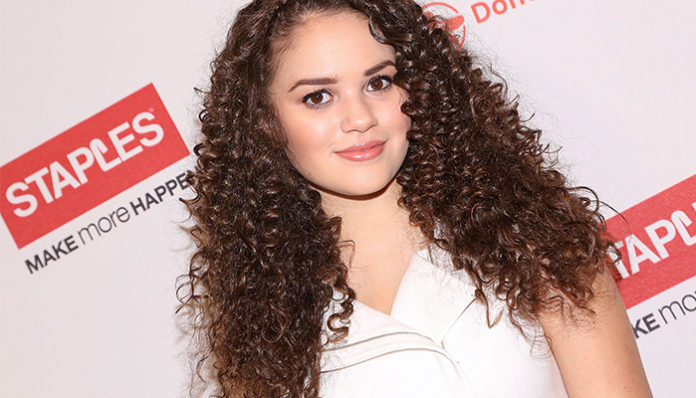 Audiences probably best remember Madison Pettis as Sopie Martinez on the Disney comedy series, Cory in the House. As a child, the brunette was first noticed after her mother entered her into a modelling competition held by a local parenting magazine. Not long afterward, she began appearing in a number of television commercials; by the time she was five years old, she had already signed on with a talent agent. During her early career, she appeared in a number of music videos including Barney: Can You Sing That Song (2005), Thank You God For…Friends and Helpers (2006), and Barnet: Let’s Make Music (2005). At the age of eight, she appeared on a television series for the first time in the mystery drama, Jericho (2006). From there, she appeared in a couple of episodes of Barney & Friends (2006) before landing a major breakthrough with the Disney Original Series, Cory in the House in 2007. Cast as one of the female leads, her popularity quickly began to climb from that point on.

One of the most popular TV series among younger audiences in the late 2000’s, Cory in the House ended up propelling the actress into stardom during its run. Not only that, but it also garnered her a Young Artist Award nomination for “Outstanding Young Performers”, which she stared with a couple of her fellow co-stars, Jason Dolley and Jake Thomas. A year after the end of the Disney series, Pettis lent her voice to a supporting character in the animated cartoon, Phineas and Ferb (2009)ーa role that she continued on and off for four years. Securing yet another voice-over gig, the brunette later played one of the main protagonists in Disney’s Jake and the Never Land Pirates (2011). Eventually returning to live-action acting, she portrayed the role of Allie Brooks in the Canadian teen sitcom, Life with Boys (2011). While she was still on the show, she also played a recurring character in the sitcom, Lab Rats (2012).

Like most actors, television isn’t the only thing that she’s branched out to; Pettis has also appeared in a variety of films over the years. In 2007, she made her official big screen debut in the sports comedy, The Game Plan where she starred alongside Dwayne Johnson, Kyra Sedgwick, Morris Chestnut and Roselyn Sanchez. The following year, she played a minor character in the heartfelt drama film, Seven Pounds (2008) before co-starring in the coming-of-age movie, Free Style (2008). Her most recent appearance was in that of the Christian drama film, Do You Believe? which hit theatres in the spring of 2015.

What has the young actress of Texas-origin been up to recently? Is she still taking part in TV and movies? What new roles have the recent months brought in for her? What happened to Madison Pettis? Where is she now in 2018? 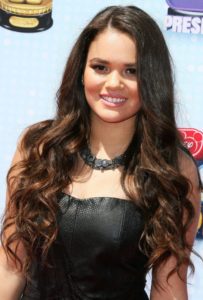 Born on July 22, 1998 in Arlington, Texas, Madison Michelle Pettis is the daughter of Michelle and Steven Pettis; she is of Irish, French, Italian, and African-American descent. When she was still a pre-schooler, her mother entered her into a modelling competition held by a local parenting magazine.

Emerging as the winner, Pettis was later featured on the cover of the Fort Worth Child Magazine. From that point onwards, her career took off; not only did she appear in various print advertisements (e.g. General Motors, Procter & Gamble, Neiman Marcus), but she also began acting in a variety of television commercials. By the time she was five, she had already signed with a talent agent, complete with her own website. Also an avid dancer, Pettis took up to ten different dance lessons a week at point during her childhood.

At the age of seven, she appeared in a few music videos including that of Barney: Can You Sing That Song (2005), Thank You God for…Friends and Helpers (2006), and Barney: Let’s Make Music (2006). From there, it wasn’t long until she made her official acting debut in the television series, Jericho (2006), playing a minor role in the pilot episode. After appearing in a couple of episodes of Barney & Friends (2006) alter that same year, she found herself guest starring in the popular shows Hannah Montana (2007), and The 4400 (2007). The young actress eventually received a big breakーperhaps the biggest one of her careerーwhen she was cast as one of the main characters in the Disney Original Series, Cory in the House (2007).

Madison Pettis’ Breakthrough in Cory in the House 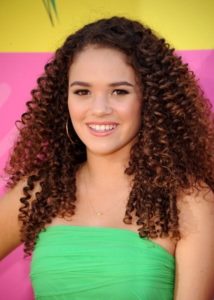 A spin-off of That’s So Raven (which Pettis happened to be a huge fan of), the television series revolved around the life of the title character, Cory Baxter after he moves to San Francisco, California with his father, who has landed a job at Washington’s White House. While Kyle Massey reprised his role as the male lead, Pettis played the part of Sophie Martinezーthe president’s mischievous daughter whom Cory considers to be an annoyance; she is often seen with her two closest friends, Tanisha and Haley. One of the lead protagonists, Sophie appeared in all 34 episodes of the series. Other starring members of the cast include Jason Dolley, Maiara Walsh, John D’Aquino, and Rondell Sheridan.

Initially debuted on TV on January 12, 2007, Cory in the House was the Disney Channel’s first spin-off series at the time. Although popular amongst teen viewers, the show generally received mediocre reviews from critics. Having said that, it did receive a handful of award nominations throughout its run, including an Image Award nomination for “Outstanding Children’s Program”ーnot to mention, it also offered Pettis her first major role on television, which continues to be one of her best remembered portrayals to this day. As a member of the main cast, the actress was also nominated for a Young Artist Award in 2009, which she shared with a couple of her fellow co-stars. 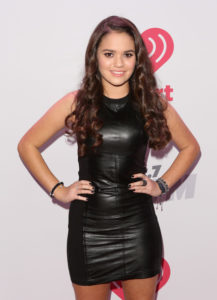 Just a few months after landing her breakthrough role in the Disney sitcom, Pettis co-starred in the sports comedy film, The Game Plan (2007). Her first major appearance on the big screen, she played alongside Dwayne Johnson, Kyra Sedgwick, Roselyn Sanchez and Morris Chestnut.

Produced by Gordon Gray and Mark Ciardi, the movie revolved around an NFL quarterback who after living many years of the single lifestyle, discovers that he actually has a young daughter from a former relationship; the two main characters are played by “The Rock” and Pettis respectively. At the beginning of the movie, Peyton Kellyーhis daughter, arrives at his doorstep with the surprising announcement that she is his biological daughter.

Following an initial premiere in Hollywood, The Game Plan was released nation-wide in theatres on September 28, 2007. A huge commercial success, the film entered the box office at number one, grossing well over $22 million during its opening weekend across 3100 screens. Following a five-month run, the blockbuster had drew in a total of $146.6 million worldwide against a production budget of $22 million. Despite the staggering amount that it grossed however, movie critics generally had negative reactions to the film. Still, The Game Plan managed to garner Pettis yet another Young Artist Award nomination for the category of “Best Performance in a Feature Film – Young Actress Age Ten or Younger”.

Several roles later, Pettis was cast as one of the female protagonists in the Canadian sitcom, Life with Boys (2013). Created by Michael Poryes, it centered around Tess Fosterーa fifteen year old teen who finds herself struggling being the only girl in the house as she lives with her overprotective father and three brothers.  Although faced with various difficulties, she manages to pull through with the help of her closest friend, Allie (played by Pettis). The rest of the main cast consisted of Torri Webster, Nathan McLeod, Michael Murphy, Jake Goodman and Sandy Jobin-Bevans.

Originally premiered on December 28, 2012 in the United States, Life with Boys ran for two years, for a total of forty episodes. Aimed toward younger teens, the general consensus on the series was positive. Throughout its run on Nickelodeon (YTV in Canada), it received several accolades including a nomination for a Canadian Screen Award for “Best Children’s or Youth Fiction Program or Series” in 2014. 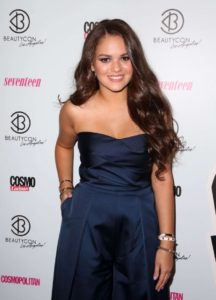 Around that same time, Pettis also played a supporting part in the Disney XD sitcom, Lab Rats (2012). Created by Bryan Moore and Chris Peterson, the show revolved around the life of a young teen by the name of Leo Dooley. After his mother remarries to a billionaire inventor, he comes to find (by accident) that his three step-siblings possess bionic powers.

Throughout the series, the teens get themselves into a number of adventures, all while trying to live a normal life in the fictitious city of Mission Creek, California. The main cast of Lab Rats consisted of Billy Unger, Spencer Boldman, Tyrel Jackson Williams, Hal Sparks, and Kelli Berglund. Portraying a recurring character, Pettis was given the role of Janelleー a young woman who first appears in the tenth episode of the first season. Guest-starring on the show from time to time over the next few years, the actress appeared in a total of ten episodes.

Proving to be a popular series upon its premier on February 27, 2012, Lab Rats continued for four years, spawning 90 episodes throughout its run. In September of 2015, it was also announced that a spin-off would be created called Lab Rats: Elite Force; it later premiered in 2016.

In addition to taking on live-action roles, Pettis has also worked as a voice-actress in several animated series over the years including Phineas and Ferb (2009), Jake and the Never Land Pirates (2011), The Lion Guard: Return of the Road (2015), and The Lion Guard (2016). For her portrayal of Izzy, one of the main characters in Jake and the Never Land Pirates, she was nominated for two Behind the Voice Actors TV Voice Acting Awards in 2014 and 2015.

Throughout the early 2010’s, the actress also starred in a handful of made-for-television films such as The Search for Santa Paws (2010), Beverly Hills Chihuahua 2 (2011), Beverly Hills Chihuahua 3: Viva la Fiesta (2012), and Mostly Ghostly: Have You Met My Ghoulfriend? (2014). On the big screen, her latest role was that of Maggie in the Christian film, Do You Believe? (2015).

Asaide from reprising her role as Zuri in Disney’s The Lion Guard, Pettis hasn’t been too active in the acting scene as of lateーas of 2017 anyway. Last November, the Cory in the House celebrity was seen reuniting with The Rock, with whom she worked with in The Game Plan, at the premiere of Moana (2016). Following the event, the duo even exchanged a couple of sweet tweets to one anotherーboth messages have since garnered over a 1000 likes each.

Will the 18-year-old be starring in any new movies of TV shows this upcoming year? Only tell can tellーwe’ll keep you updated!