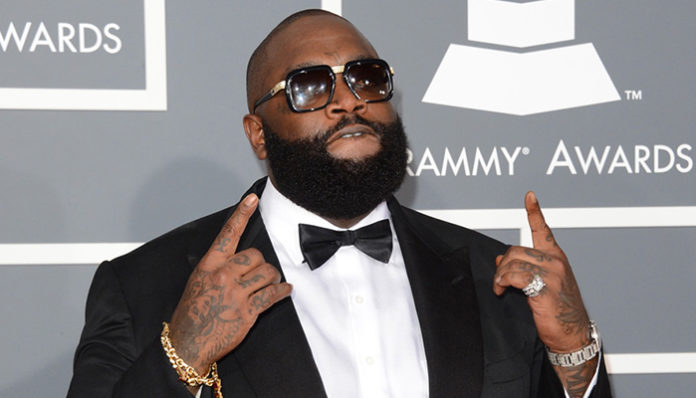 Grammy Award-nominated rapper Rick Ross rose to prominence with his debut album, Port of Miami (2006). Raised in Florida, he began developing an interest in rapping in the mid 90’s. Eventually wanting to be part of something, he joined a local rap group called The Carol City Cartrel. In 2000, Ross released his first song, Ain’t Shh to Discuss, which was a collaboration with fellow hip hop artist, Erick Sermon. Following that, he worked with Suave House Records briefly, before to signing with Slip-n-Slide, a label under Def Jam Records. It wasn’t until the mid 2000’s that he adopted his current stage name, Rick Rossーwhich is actually, derived from a drug trafficker. Prior to releasing any albums, he performed and toured with Trick Daddy and Trinaーthe former of whom is one of his biggest musical influences. Finally in the summer of 2006, the rapper released his debut album, Port of Miami. Very much a successful album, it topped the US charts and quickly propelled him into superstardom.

Two years after his initial venture, he dropped his second studio album, Trilla in 2008. Similar to his preceding effort, it proved to be yet another major success for Rossーwho is now rapidly rising in fame. Since then, Ross has released a total of eight full-length albums, seven mix-tapes and over eighty different singlesーa few of his most popular hits include: Hustlin, Push It, The Boss, Magnificent, Here I Am, You the Boss, and The Devil is a Lie. A talented musician, his 2012 single, I’m on Oneーwhich was a collaboration with Drake & Lil Wayne and DJ Khaledーlater earned him his first Grammy Award nomination for “Best Rap/Song Collaboration”. As for his albums, Port of Miami remains to be his best-selling work, having sold over a million copies in the United States. Having said that, his fifth album God Forgives, I Don’t also went on to garner him a Grammy nomination for “Best Rap Album” in 2013.

Over the years, Ross’ music has been featured in a number of shows including Late Night with Jimmy Fallon (2010), We’re the Millers (2013), and Pitch Perfect 2 (2015), to name a few. In addition to his talents as a musician, he has also appeared in several acting projects throughout his career such as Days of Wrarth (2008), Fabolous: Everything, Everyday, Everywhere (2009), Magic City (2013), and Purple Lamborghini (2016)ーthe first of which was also his feature film debut. Aside from that, the rap star has also been interviewed in various talk shows; for instance, he has been on Lopez Tonight (2010), Chelsea Lately (2012), and Good Morning America (2014).

So what has the three-time Grammy Award-nominated rapper been up to these days? Where is most of his time spent? What are some of his latest endeavours? What happened to Rick Ross? Where is he now in 2018? 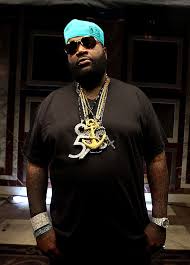 Born on January 28, 1976 in Coahoma County, Mississippi, Rick Ross (Birth Name: William Leonard Roberts II) spent most of his youth in Carol City, Floridaーan area just north of Miami. Growing up, he loved music; he was especially fond of the hip hop artists Ice Cube, The Notorious B.I.G., Tupac Shakur and Trick Daddy, all of whom are some of his biggest musical inspirations.

Under a football scholarship, Ross went to Albany State University in Georgia after graduating from high school, however his dreams of writing and recording rap never left him. At the age of nineteen, he began working as a correctional officerーa position which he held onto for a little over a year, after which he was determined to get his music career on track. Under the stage name Teflon Da Don, he recorded his first song, Ain’t Shhh to Discuss, which was featured on Erick Sermon’s 2000 album.

A few years later, he adopted the moniker of Rick Rossーderived from an infamous drug traffickerーand signed with Suave House Records. Soon afterward, he signed a recording deal with Slip-n-Slide, a subsidiary of the Def Jam label. Before even working on his debut album, the rapper was invited to accompany one of his idols, Trick Daddy on a tour; he later also made a number of guest appearances in a variety of other albums for Slip-n-Slide. Eventually in the summer of 2006, Ross released his first full-length album entitled, Port of Miami; it was preceded by the release of its lead single, Hustlinーwhich was released in March of that year. 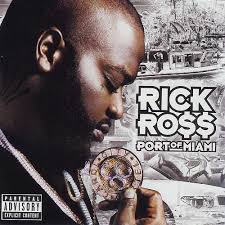 Produced by a talented team consisting of Cool & Dre, DJ Toomp, Mario Winans, and various others, Port of Miami was released in stores on August 8, 2006. Ross’ first studio album, its contents were entirely hip hop in nature; a few titles from its nineteen-song track list include: Cross That Line, Hit U From the Back, Where My Money (I Need That), Pots and Pans, and It Ain’t a Problem. Well over an hour in duration, the album featured a number of guest appearances from artists such as Akon, Dre, Rodney, and Lyfe Jennings, amongst others.

A powerful debut for the rapper, it entered the Billboard 200 Chart at number one and sold 187,000 units during the initial week. Incredibly well received, the album received many praises in particular for its hot, catchy beats; the release was commended by several different publications including Entertainment Weekly and USA today which gave it a “B” and a three out of four star rating respectively.    Not long after its release, Port of Miami also snatched the number one position on the US Top R&B and Hip Hop Albums Chart. As of July 2016ーten years after it was first made availableーit has been certified Platinum, for having achieved over one million units in sales.

In March of 2008, Ross released his second studio album, Trillaーonce again under Slip-n-Slide. Co-produced by the rapper himself with the help of Ted Lucas, The Carter Administration, amongst others, it boasted fifteen songsーa number of which featured artists such as Ja-Z, Lil Wayne, Triple C, and R. Kelly. In a later interview with the rapper, it was revealed that Trilla was actually titled after a term that was often “used down south”. Although shorter than his initial album in length, it was ultimately met with comparable success in stores.

Undoubtedly popular amongst fans, the record debuted at the top of the Billboard 200 and sold approximately 198,000 units during the first weekーan amount that is even greater than what was achieved by Port of Miami a couple of years ago. The parent of three singles: Here I Am, The Boss, and Speedin’, the album later also peaked at number one on the Top R&B and Hip Hop Albums Chart and the Top Rap albums Chart; over the border in Canada, it also snagged the fourteenth position on the RPM Music Chart. In spite of its sales however, opinion on the release was generally mixed; while publications such as USA Today gave Trilla a favourable, three out of four star rating, other critics such as those from Pitchfork Media presented the album with a score of 2.4/10. Still, it has since received Gold certification from the RIAA for selling over 500,000 copies domestically. 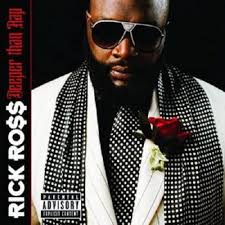 The next year, Ross’ third album, Deeper Than Rap was released. Recorded in between 2008 and 2009, it featured a number of guest appearances from Foxy Brown, Ne-Yo, Avery Storm and Nas, amongst others and was also his first release with Maybach Music. Supported by four singlesーone of which was promotional in nature, the album boasted fourteen tracks; a few stand outs include All I Really Want, Rich Off Cocaine, Lay Back, Gunplay, Bossy Lady, and Valley of Death.

Despite a controversy that arose during its development, Deeper Than Rap entered the US Billboard 200 at number one, selling approximately 158,000 copies in the US within the first week. Compared to his previous effort, the album received generally more positive reviews from both fans and critics. Given an above average score of 73 on Metacritic, it was holds positive ratings from The New York Times, Los Angeles Times, and Vibe Magazine. Domestically, Deeper Than Rap eventually made its way to number three on both the Top R&B and Hip Hop Albums Chart and the Top Rap Albums Chart; it also peaked at number twenty-three in Canada.

Continuing diligently with his recording, Ross released his fourth full-length album, Teflon Don on July 20, 2010. Handled by many talents record producers in terms of production, it was originally announced by the artist on MTV earlier that year. Supported by his Blowin’ Money Fast Tourーwhich took him across the worldーthe album contained eleven songs including Free Mason, Super High, Live Fast Die Young, Maybach Music III, and All the Money in the World.

A comeback album for the artist, it opened at number two on the Billboard 200 and sold over 170,000 copies in its debut week. Critically acclaimed upon its release, Teflon Don has been hailed as Ross’ strongest album by many contemporary music critics including David Jeffries, Jon Caramanica and Sean Fennessey. Showered with praise, it was later included in Pitchfork Media’s list of “Top 50 Albums of 2010” and The Rolling Stone’s list of “Top 30 Albums of 2010”. To date, it remains to be Ross’ second best-selling album, right behind his debut work, Port of Miami. Aside from the three US Charts which it eventually found its way onto, it also peaked in Canada, and the UK. His second Gold certified album, it has since sold over 724,000 copies in the United States.

From there, Ross has gone on to release a handful of other albums including God Forgives, I Don’t (2012), Mastermind (2014), Hood Billionaire (2014), and Black Market (2015). Out of the four, the most successful had been the first; although it wasn’t a chart topper, it managed to sell over 585,000 copies domestically, earning it Gold accreditation from the RIAA. In contrast, the others have sold significantly less copies since their release. Aside from the aforementioned releases, the rapper has also dropped a number of collaborative albums since then including Self Made Vol. 3 (2013), and Self Made Vol. 4 (2016). 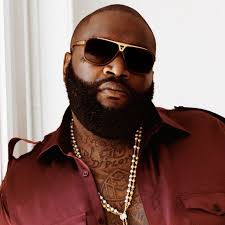 Are you a fan who is anxiously waiting for Ross’ next album release? It looks like the wait is almost overーaccording to the rapper, his tenth studio album will be making its way to stores sometime this year. His first record with the Epic label, the artist has self-desribed it to be “a product of determination, perseverance, and strength”. Originally announced in November, the album entitled Rather You Than Me will be his first since Black Market back in 2015.

In other news, the musicianーwho also happens to be a successful entrepreneurーhas opened up a new Wingstop (a chicken-wing serving restaurant chain), location in the city of Decatur. The ribbon-cutting ceremony was officiated by none other than Ross himself during its grand opening on January 27, 2017.

If you’d like to stay connected with the rap star, you can do so by following Rick Ross on social mediaー you can find the man on Instagram at @richforever or on Twitter at @rickyrozay. Of course, you’re also welcome to drop by his official Facebook page at @rickross!