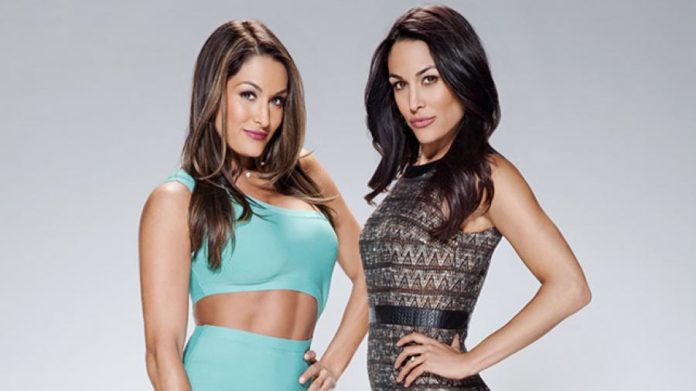 Female wrestling has become huge recently; with a so-called “Diva’s Revolution” launched in WWE to change the performing name from Diva to just Women, other brands have also begun to embrace many female wrestlers for their technical prowess and appeal (after all, wrestling is dominated by more than 90% male viewership). Who were some of the most prominent female names ever in the history of professional wrestling? This list has 10 big names that you should know, none of which are in a particular order of importance or relevance. 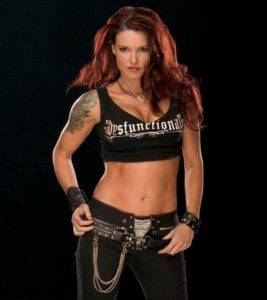 Lita is notable for her time spent with The Hardy Boyz in the WWF, where she was active from 1999 all the way up until 2007; 8 years as a WWE female wrestler is almost unheard of. Throughout her long tenure, she remained relevant in storylines and participated in mixed gender matches, showing that she was strong enough to hold her own (one thing that many women on this list have in common). Lita also participated in a legendary, once-in-a-lifetime feud with Trish Stratus, although the two quickly became best friends through their competitive spirit. Lita eventually retired in 2008, but remains active in the WWE to this day. She is active either as a mechanism in the storylines, or she can typically be found hosting the kickoff panels that are aired live prior to any major pay-per-view event. Lita held the WWE Women’s Championship belt 4 separate times and has been inducted into the WWE Hall of Fame. 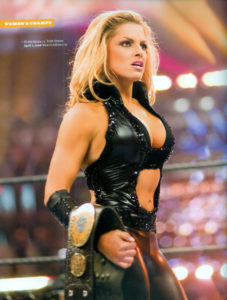 Trish Stratus is one of the most famous WWE Women’s Champions of all time; her career started later than some female wrestlers, beginning in the early 2000s as a manager of the group Test & Albert (or T & A – very punny). With her first WWE Women’s Championship win in 2000, she would go on to hold the title 7 times and even hold the WWE Hardcore Championship for a small period of time in 2001-2002. Trish Stratus was the start of combining both sex appeal and in-ring technical prowess, and it has earned her a permanent spot in the WWE Hall of Fame with the Class of 2013. Trish is no longer active in the WWE, but has begun undertaking acting roles in movies and television shows. She also opened up a yoga studio in 2008 in her motherland of Canada. 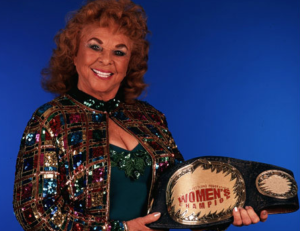 The Fabulous Moolah was one of the first-ever female wrestlers ever, and was one of the first few managers to pioneer the managerial role. Moolah, born Mary Lilian Ellisor, became active in the mid-1950’s and eventually won her first championship, the NWA World Women’s Championship, in 1956. Starting in the 1980s, she would jump ship to the WWE and would be an important role there. She became a trainer for many of the rising female talents while holding some presence on-screen; she was typically involved as a punchline for perverted male storylines, which includes a famous moment with Jerry “The King” Lawler. Unfortunately, The Fabulous Moolah passed away in November of 2007, but she was inducted into the WWE Hall of Fame 12 years earlier with the class of 1995. 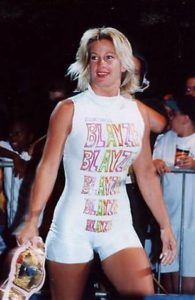 Alundra Blayze, also known as Madusa, is one of the tougher faces of women’s professional wrestling. Madusa started wrestling in the 1980s in Japan, learning the style and techniques there, before eventually making her way to the United States and signing up with WWE’s competitor at the time, World Championship Wrestling (WCW) after a short two-year tenure in the WWE. She was one of the first female competitors to ever engage in intergender matches, where she entered a Royal Rumble match (which was predominantly male at the time) when she was active in the WWE, and even won the Intercontinental Championship belt, which was a male’s division. She was inducted into the WWE Hall of Fame in 2015. 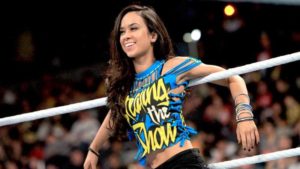 AJ Lee is one of the most recent female professional wrestlers on this list, and despite a sudden departure from the WWE (which can be attributed to her relationship with former-WWE wrestler and now-UFC fighter, CM Punk), has left behind quite the legacy. AJ Lee was a happy cross-section between cute, beautiful, crazy, and charged with technical prowess. She held the WWE Diva’s 3 separate times and received 3 different “Slammy Awards,” one of which was shared John Cena. AJ Lee is known for her outspoken nature, despite being one of the quietest on-screen personalities; she has just recently come out announcing that she suffers from bipolar disorder, yet she is proud of who she is. AJ Lee is also a noteworthy geek, which really completes the package and makes her incredibly memorable and instantly relatable. AJ Lee has retired from in-ring competition, where her feud with Paige made her instantly more credible, and instead has begun writing books, stories, and other literature. 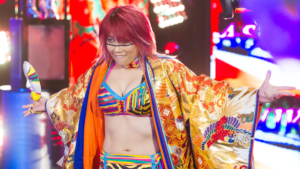 Asuka, previously known as Kana, is one of the newest female talents to the WWE and American fans, but is one of the most recognized female wrestlers of all time. Asuka hails from Japan, where she spent many years wrestling in the “joshi” style (female wrestler) and signed up with the WWE developmental branch, WWE NXT. She has spent two years under the NXT banner, but has held the WWE NXT Women’s Championship for just under a year total. Asuka is renowned for her stiff style and unique image, which involves a vibrant, colorful outfit, a kimono robe, and her Japanese theater mask. Prior to her current WWE run, she held many championships in her homeland of Japan across many different promotions. She also produced three model videos and even has some experience working with Microsoft’s Japanese X-Box division, where she worked as a graphic designer. 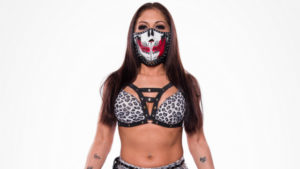 Ivelisse is a name that many wrestling fans may not be familiar with, but should be; Ivelisse is most recently renowned for her work in the Lucha-focused promotion Lucha Underground, where her work has really shined through. Ivelisse was part of the WWE banner for a short period from 2011 through 2012, where she participated in the “Tough Enough” program to search for potential stars in a reality-show based process. She received enough attention in the Tough Enough show and eventually received a contract to sign up with developmental branch NXT, but WWE and Ivelisse eventually parted ways; she went on to perform with Total Nonstop Action before working independent wrestling circuits, although now she has found her home with Lucha Underground. On Lucha Underground, Ivelisse is part of a trios team (trios are more popular than duos in Lucha) with Angelico and Son of Havoc, where they won the inaugural trios title. Ivelisse broke her foot outside of wrestling, but still could be found ringside during the show; this has contributed to her self-proclaimed title of “Baddest Bitch in the Building.” Ivelisse is currently pregnant and may not be found on Lucha Underground programming anytime soon, but rest assured, she will make an explosive return. 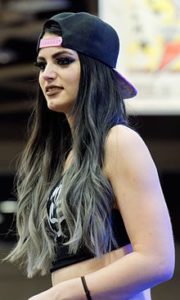 Paige is one of the biggest female talents produced by WWE in recent days; Paige has an interesting beauty due to her pale skin but dark clothes, hair and make-up. Paige hails from England, where she comes from a family with roots in the wrestling world. She is the daughter of “Sweet” Saraya Knight, and has been wrestling since she was only 13 years old. She is known as a wrestling prodigy as a result, and WWE has worked heavily with this title – she held the developmental WWE NXT Women’s Championship and the WWE Diva’s Championship at the same time, where she won the latter during her very first appearance on television. Unfortunately, Paige has been going through some trouble as of late, but has found a relationship with fellow wrestler Alberto Del Rio, who has been in and out of WWE twice, Lucha Underground once, and also has an MMA background. Paige is expected to return to the WWE soon due to a neck injury, although she was suspended twice under the WWE Wellness Program twice prior to receiving time off to heal. 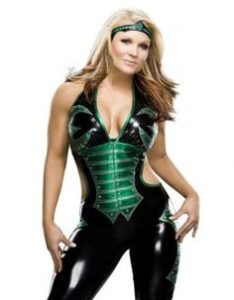 Beth Phoenix is known as “the Glamazon,” which is a very fitting title; Beth Phoenix is definitely reminiscent of an Amazon in nature due to her muscular build and hard-hitting style. Beth Phoenix is almost a shadow of Alundra Blayze, as she is only the second woman ever in history to enter the yearly WWE Royal Rumble Match. She has won the WWE Women’s Championship on four occasions, starting with her first year of being active on the main WWE roster in 2007. Beth Phoenix retired in 2012, but has found a happily-ever-after life with fellow wrestler Adam Copeland, best known as Edge. The two have had two children together and married in 2016. She is also a recipient of 1 Slammy award from WWE. 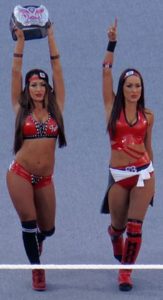 Rounding out the list are two of the most famous names ever to be produced by the WWE, both Nikki and Brie Bella. The Bella twins are recognizable worldwide for their Bella brand, which includes empowering young women all over the world with their wrestling roots. Both Bella twins began wrestling under WWE’s developmental branch at the time, Florida Championship Wrestling, in 2007 before becoming active on the main roster sometime in late 2008/early 2009. Since then, both Brie and Nikki have gone on to hold the WWE Women’s Championship several times each, and have also both feuded with each other and partnered with each other; one example is the storyline where Brie had to become Nikki’s assistant, while also dealing with Vince McMahon’s daughter, Stephanie McMahon. Nikki Bella has since announced her temporary retirement from wrestling while attempting to have and raise children with fellow wrestler Daniel Bryan, while Brie is still active and in the pursuit of the WWE Raw Women’s Championship. Brie is in a relationship with John Cena; should Brie marry John Cena, the entire Bella family will produce some of the best professional wrestlers this world ever sees, be they male or female. The Bella Twins are also the stars of WWE’s reality show, “Total Divas,” which still airs on both the E! Network and WWE Network.