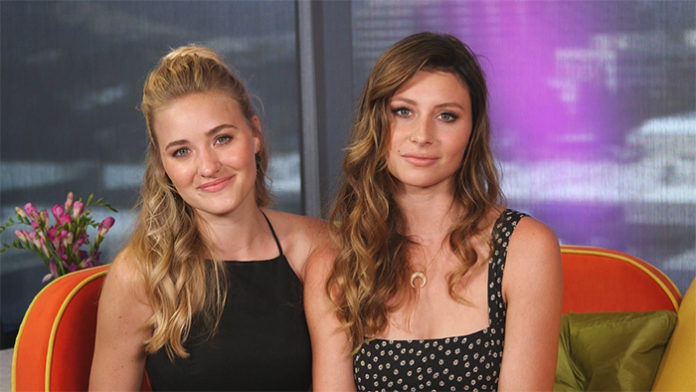 Sisters Amanda and Alyson Michalkaーbetter known as Aly & AJ, made themselves known as a pop rock duo with the release of the debut album, Into the Rush in 2004. The daughters of a musician, they both started their acting careers at the age of five, appearing in a number of church stage productions in Washington, and Seattle. During their youth, she also starred in several musicals such as A Time to Remember and Jailhouse Rock. Taking an interest to music earlier than her sister, AJ took up the piano when she was six years old and by the time she was in her teens, she was also proficient with the guitar. Aside from playing tunes, she has also modelled for various print catalogues. In 2004, the sisters came together to form a music duo which that coined Aly & AJ. Successfully securing a recording deal with the Hollywood label, they quickly began working on their big debut. After a year of stepping in and out of the studio, they came out with their first full length album, Into the Rush (2004).

A major hit for the sisters, the album made its way onto the Billboard Top 200 and has since sold over a million copies across the world; in the United States, it also achieved Gold status. Following their initial success, they released their second studio album entitled, Acoustic Hearts of Winter under the same label in the fall of 2006. Although its charting performance didn’t compare to that of their debut effort, it still managed to find its way onto the US Chart. A year later, Aly & AJ dropped their third full length album, Insomniac. Very much a comeback album, it reached number fifteen on the Billboard 200 and sold 700,000 copies domesticallyーmaking it their second best-selling album to date. In addition, the sisters have also come out with a total of six hot singles, one of whichーPotential Breakup Song, has gone Platinum in the US.

But that’s not allーAly & AJ have also released a number of promotional singles including Jingle Bell Rock, Do You Believe in Magic, Walking on Sunshine, Never Far Behind, and On the Ride. Throughout the years, the sisters have also come out with a little under a dozen music videos. Aside from music, they’ve also taken part in a number of television and film projects as actresses. In 2005, they made their small screen debut in the TV movie, Now You See It… Since then, they’ve also appeared in Cow Belles (2006), Phil of the Future (2004), Super Sweet 16: The Movie (2007), Hellcats (2010), Breaking In (2012), and Grown Ups 2 (2013), to name a few. 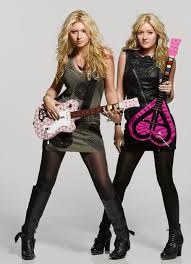 Born on March 25, 1989 in Torrance, California, Alyson MichalkaーAKA Aly, is the daughter of Carrie and Mark Michalka, a musician and the owner of a contracting company; she is of Irish, Welsh, Scottish and English descent, as is her sister. Growing up in between Southern California, Washington, and Seattle, she started acting at the tender age of five in various stage productions put together by her local church. Not only that, but she starred in a number of musicals such as A Time to Remember and Jailhouse Rock during her youth. Aside from being an actress, Aly has also been playing both the piano and the guitar at the young age. During her teens, she often spend her free time writing lyrics and singing with her younger sister, AJ. On top of everything, she is also a talented artist; when she was ten years old, she drew and designed a holiday card which later won a Christmas contest held by Hallmark.

Much like her sister, Amanda Joy MichalkaーAKA AJ, was born in Torrance California on April 10, 1991; she is two years younger than her older sister. Following in her sister’s footsteps, she took up the piano when she was six years old and has been playing the guitar ever since she was a teenager. While she was grade school, she also participated in a number of church plays alongside Aly, which served as the beginning of her acting career. As a young adult, she also starred in a number of musicals with her sister. Following a brief period of modelling, AJ turned her attention to acting in the early 2000’sーprior to the conception of their music duo. In 2002, she made her television debut in an episode of the TV drama, Passions. Some of her other early projects include Birds of Prey (2002), The Guardian (2002), General Hospital (2004), and Oliver Beene (2004). 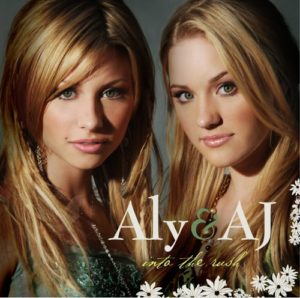 Throughout their teens, the two sisters had always wrote songs, and performed together. After many years of such a lifestyle, they decided to make it official by forming a pop rock duo which they appropriately called Aly & AJ. Their musical talents apparent, it didn’t take long for the siblings to land a recording contract with Hollywood Records in 2004.

On August 16, 2005, Aly & AJ released their debut studio album entitled, Into the Rush under the Disney-owned, Hollywood Records. A pop rock album, its production was handled by a team of talented producers including Andy Dodd, Antonina Armato, Matthew Gerrald, Tim James and Jon Lind. Under a hour in length, the album boasted fourteen tracks including Something More, Speak for Myself, On the Ride, In a Second, Sticks and Stones, and I Am One of Them. A year after the original release, a special deluxe edition was also made available in stores, which contained three new songs, Chemicals React, Never Far Behind, and Shine, a bonus DVD, and two new mixes.

Upon its release in stores, Into the Rush entered the US Billboard Top 200 at number thirty six; within one week, it managed to sell approximately 25,000 copies domestically. After spending nearly forty weeks on the chart, the album fell off, its last position being number 123. Warmly received by contemporary critics and fans, the album was considered a commercial success for the sisters. For instance, Allmusic praised the two’s “real singing ability” and delightful arrangements. Other publications such as About.com, Common Sense Media and Kidz World also gave similarly favourable reviews. Combined with the sales of the deluxe version that was later released, Into the Rush became the 112th best-selling album in the country in 2006. To date, it has sold over 839,000 copies within the US and over a million copies around the worldーmaking it their first RIAA certified album.

A year later, the pop duo released their second studio album, the holiday-oriented Acoustic Hearts of Winter on September 26, 2006. Recorded shortly after the completion of their debut effort, it featured production by Gerry Cagle, Antonina Armato,Tim Janes, and their mother, Carrie Michalka. Their first and only Christmas album, it boasted several covers of both traditional carols and contemporary classes, most of which were instrument-driven notably by acoustic guitar. Some of the titles from the album include Greatest Time of the Year, Let It Snow, I’ll Be Home for Christmas, Not This Year, Silent Night, God Rest Ye Merry Gentlemen, The First Noel, and We Three Kings. In a special edition that was made exclusively available at Target, the album also came with three bonus tracks, Rockin’ Around the Christmas Tree, We Wish You a Merry Christmas, and Winter Wonderland.

Two months after it was released in stores, Acoustic Hearts of Winter entered the US Billboard 200 at number seventy-eight. From there, it remained within the top 100 for close to three weeks, prior to coming off the chart. In addition, the holiday album also entered the Top Holiday Albums Chart at number twenty, where it later peaked at number fourteen a week later. The second best-selling holiday album of the season that year, it garnered mostly positive reviews from critics. For instance, Allmusic lauded the sisters’ pop covers of the Christmas classics, giving the album a three out of five star rating. Logan Leasure writing for Jesus Freak Hideout also gave it a three and a half star rating, having said many positive things about the album. To promote Acoustic Hearts of Winter, Aly & AJ performed at the 2006 Christmas Day Parade at Walt Disney World and also opened for Miley Cyrus’ The Best of Both Worlds Tour later that year. To date, it has sold over 110,000 copies in the United States. 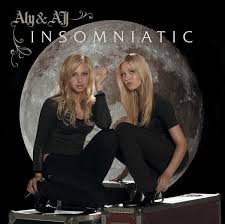 On July 10, 2007, the sisters came out with their third full length album, Insomniatic under Hollywood Records. A step away from their earlier work, it mostly featured electronic-based sounds whereas their earlier albums consisted of pop-rock and acoustic tunes. Revolving around a lyrical theme of heartbreak, the album was produced by Tim Janes and Antonina Armato. Their final release under the name Aly & AJ (they would later change their name to 78violet in 2009), the standard edition came with thirteen tracks including If I Could Have You Back, Flattery, I’m Here, Like It or Leave It, Like Whoa, Division, and Potential Breakup Song; a couple of bonus tracks were also available in special editions that were sold exclusively in Walmart and Target.

Much more successful than their previous holiday album, Insomniatic debuted on the US Billboard Top 200 at number fifteenーthe highest which the siblings have ever achieved. By the end of the first week, it had sold more than 39,000 copies, making it their greatest debut to date. Outside of the United States, the album also charted in Japan and the UK where it reached number ninety and number seventy-two respectively. Lauded for its lyrical depth, Insomniatic received numerous positive reviews, many of which praised it for its well-constructed songs and quality of lyrics. Many mainstream publications gave the album favourable ratings including The Guardian, Billboard, as well as contemporary music critic, Robert Christgau. Supported by an Insomniatic Tour and Mini Summer Tour later that year, the album later went on to spawn two singles, Like Whoa, and Potential Breakup Songーthe last of which ended up going Platinum in the US. As of 2016, the album has sold over 700,000 copies domestically, making it Aly & AJ’s second Gold certified studio album.

What have the Michalka sisters been up to recently? Well for one thing, it looks like they’re getting ready to release their fifth studio album which is to be titled, Hothouse (2017). According to a recent interview with Aly & AJ themselves, they’ve been working on a few new tracks this past summer, although they didn’t reveal any specific details. While no official release date has been announced, it’s fair to say that fans have a reason to be excited this upcoming year.

Outside of recording music, half of the duoーAly, will be co-starring in comedy drama film called The Lears. Directed and written by Carl Bessai, the plot will center around a world-renowned architect named Davenport Lear. Joining her in the cast are Sean Astin, Anthony Michael Hall, Bruce Dern and Victoria Smurfit.

If you’d like to stay up to date with the musical duo, you can do so by following them on social mediaーyou can find Aly & AJ on Twitter at @alyandaj. Alternatively, you can also drop by their official Facebook page at @alyandajmusic.