What Happened to Gareth Gates – Gareth Now in 2018 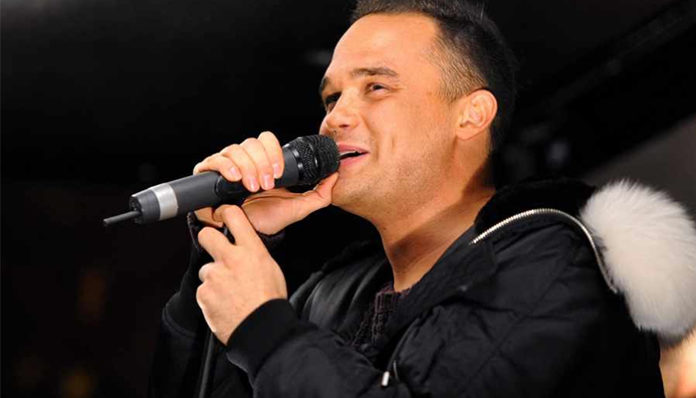 Best known for being the runner-up of the first season of Pop Idol, Gareth Gates released his debut album, What My Heart Wants to Say in 2002. A talented singer since a young age, he became a member of the Bradford Cathedral Choir when he was nine years old. His talents apparent to everyone in the audience, he was the lead singer by the time he was eleven. Not only is he good with vocals, but he’s also skilled with piano, and the guitar. However, it wasn’t until he was eighteen that he went under the limelight after coming out second in the British talent competition, Pop Idol. Instantly grabbing the attention of judges with his skilled voice, Gates was eventually offered a recording contract by Simon Cowell, one of the judges on the show, with BMG Records. After signing to the label, he promptly began working on what would become his debut album.

In the fall of 2002, the aspiring pop singer released his first full length album entitled, What My Heart Wants to Say. A smash hit, it reached number two on the UK Albums Chart and have since gone Platinum in the country. Since then, Gates have come out with an additional three albums. Although none of them ultimately went on to match the same level of success as his debut effort. In addition, he has released ten music videos, and nine singlesーmany of which have charted nicely in his native UK. Some of his hottest hits include Unchained Melody, Anyone of Us (Stupid Mistake), What My Heart Wants to Say, Spirit in the Sky, Say It Isn’t So, and The Long and Winding Road.

On top of his musical releases, Gates has embarked on many concert tours over the years; for instance, he’s gone on the Pop Idol Arena Tour (2002), the Will Young and Gareth Gates Arena Tour (2002) and the Go Your Own Way Arena Tour (2004)ーall of which brought him to various cities around the world. Since 2008, the vocalist has also branched out into musical theatre. In 2008, he starred in a production of A Spoonful of Stiles & Drew, which served as a fundraiser to celebrate the musical composers Anthony Drewe and George Stiles. Some of the other theatre works that he’s starred in include Les Miserables, Joseph and His Amazing Technicolour Dreamcoat, Loserville, Sleeping Beauty, and Boogie Nights.

What has the singer of Pop Idol fame been up to recently? What has he been working on as of late? Will he be releasing any new music or is he now focusing solely on music theatre? What happened to Gareth Gates? Where is he now in 2018? 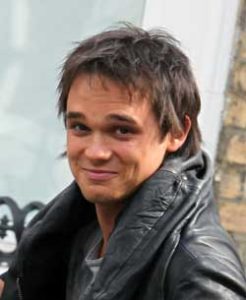 Born on July 12, 1984 in West Yorkshire, England, Gareth Paul Gates is the son of Wendy and Paul Broadbent; the oldest out of four siblings. Growing up in the city of Bradford, he also lived with his younger cousin James, whom his parents welcomed into the family as foster parents.

Having developed an ear for music at a young age, Gates began singing ever since he was a grade schooler. At the age of nine, he became a member of one of the most recognized churches in England. His singing talents apparent to everyone who heard him sing, he later became the lead singer by the time he was eleven years old.

Just two years later, when he was thirteen, Gates received an opportunity of a lifetime when he was chosen to perform a song for the Queen, who was visiting his city. Not only is he highly adept at singing, but he also took up guitar and piano as a child. Later playing guitar at church and then going on to West Bowling’s Dixons City Technology College where he studied music and art.

Gareth Gates as a Contestant on Pop Idol 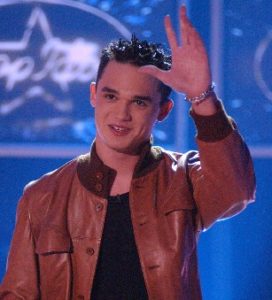 In the fall of 2001, the aspiring singer took part in the ITV singing competition, Pop Idol. Created by Simon Fuller, who is known for being the creator of the Idol Series (e.g. American Idol), it allowed for audience members to vote for their favourite competitors throughout the talent show via texting, a red button on digital television, by telephone, or through the official website.

Following an initial round of auditions, the contestants then perform in front of a group of judges, who then have control of their fates. As one of the competitors on season one, Gates went up against Darius Campbell, Rosie Ribbons, Hayley Evetts, Jessica Garlick, Rik Waller, and Will Youngーthe last of whom ultimately emerged as the victor during the ninth week.

Although he didn’t come out as the champion, Gates managed to capture the hearts of countless audience members, having garnered a steady amount of public votes in each episode. During the last episode which aired on February 9, 2002, the singer came out as the runner-up after garnering 46.9% of the vote, whereas winner Will Young received 53.1%. Despite the fact that he didn’t win the competition, Gates was still offered a recording contract with BMG Records by Simon Cowell, one of the judges on the show. With that, he began working on his debut album. 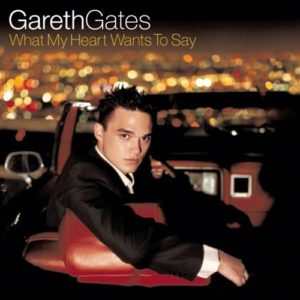 On October 26, 2002, Gates came out with his major-label debut, What My Heart Wants to Say under the BMG Label. Released close to a year after his success on Pop Idol, it was produced by a team of well known musicians such as Cathy Dennis, Mike Peden, Jewels & Stone and Steve Mac. Over an hour in length, the album consisted both of covers and original tunes; some of the titles from the sixteen-song track list include Too Serious, Too Soon, With You All the Time, One and Ever Love, That’s When You Know, Walk On By, It Ain’t Obvious, Tell Me One More Time, Good Thing, and Downtown.

Proving to be popular upon its release, What My Heart Wants To Say peaked at the second position on the UK Albums, rendering it a relatively successful debut. Outside of his native UK, the album also charted in several other countriesーmostly in Europeーincluding in Austria, Germany, Ireland, Norway, Scotland, Sweden, Switzerland, and Hungary, among others. Supported by four singles, What My Heart Wants to Say, Suspicious Minds, Anyone of Us (Stupid Mistake) and Unchained Melody, the album garnered mostly positive reviews from critics, who praises Gates for his musical efforts. Since it was first released in stores, the debut album has gone Platinum two times in the United Kingdom, having sold more than 600,000 copies.

The following year, the pop singer released his second studio album entitled, Go Your Own Way, also under BMG Records. Produced by tons of producers including Ed Johnson, Bill Padley, Chris Braide, David Eriksen and Mike Peden, the album essentially consists of two separate sectionsーwith the first half representing “Night” and the latter half representing “Day”. His last album release with BMG, it boasted fourteen pop tracks including Groove With Me, Soul Affection, Nothing’s Gonna Stop Us Now, It Happened Every Time, All Cried Out, and Too Soon to Say Goodbye; it also featured a guest appearance form The Kumars in Spirit in the Sky. In various special editions of the album, such as those released in Spain and Asia, the disc contained a few bonus songsーsome of which were acoustic versions of the original tracks.

Although not as successful as his initial endeavour, Go Your Own Way still managed to hit the charts; in the United Kingdom, it peaked at number eleven on the UK Albums Chart. Overseas, it charted in a handful of countries including Switzerland, Austria, Germany, Norway, Scotland, Australia, and Austria. The album eventually went on to spawn three singles, Say It Isn’t So, Sunshine, and Spirit in the Skyーthe last of which have since gone Platinum. To date, the album has since sold over 100,000 copies in the country. Due to its underwhelming performance however, Gates was subsequently released by his record label. 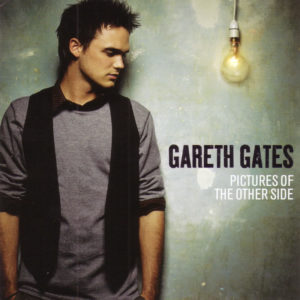 From there, it wasn’t until 2007 that Gates released his third studio album after forging a deal with Universal Records. His first album in four years, its production was handled by Kissing The Pink and Martin Terefe. Considerably shorter than his earlier works, it came complete with ten tracks including Angel on My Shoulder, Talking Minds, Electric, New Kid in Town, Can’t Believe It’s Over, Lost in You, and 19 Minutes, most of which were co-written by Gates himself. In the Deluxe Edition of the album that was made available via the iTunes Store, there were five additional tracksーincluding two music videos for the songs Angel on My Shoulder and Changes.

Not long after its release, the album peaked at number twenty three on the UK Albums Chart; outside of the United Kingdom, it also peaked at number thirty-seven in Scotland and at number ninety-nine in Norway. Accompanied by the release of two singles, Angel on My Shoulder and Changes, the album garnered mostly positive reviews from critics. For instance, UKMIX gave it a four star rating while Daily Express and the Rainbow Network gave it a three star rating.

Since then, Gates has stated that he has no plans for a fourth studio album (presumably to spend more time in musical theatre). Having said that, he did later come out with Very Best of Gareth Gates, a compilation album that was made available on March 7, 2014.

It’s no secret that Gates has been spending most of his time in musical theatreーsomething that he branched out into toward the latter part of the 2000’s. Just last month, it was announced that the 32-year-old star will be starring in a production of Robin Hood that is set to hit the Playhouse Stage this coming April. Tickets for the shows are still available, should you be interested!

In addition to playing Robin, he will also be starring in the musical, Footloose: The Musical in Swansea opposite of Maureen Nolan. According to reports, Gates will be portraying the role of Willard while Nolan will be playing the part of Vi Moore. The musical is scheduled to arrive for a week in June this upcoming summer.

If you’d like to stay up-to-date with the talented singer, you can do so by following him on social mediaーyou can find Gareth Gates on Twitter at @Gareth_Gates. Alternatively, feel free to visit him on his official Facebook page at @GarethGates.