1 800 Car Cash Update – What Happened After The Profit

In 1977, Car Cash was started by Bruce Barron, and it was pretty successful. Bruce’s sons Andrew and Jonathan joined the company, and everything was going great for awhile. But then came the Great Recession of 2007, and the death of the patriarch, Bruce Barron. By the time the Profit’s Marcus Lemonis came in to save the company, 1 800 Car Cash was in a tricky situation. The sibling-owned car buying business was on its last legs and was quickly running out of money. No money, of course, meant that they were unable to stock their shop with inventory. They were over $200,000 in debt with no way to pay it off. They were forced to lay many loyal and dedicated employees off to stay afloat. The problems were destroying Jonathon and Andrew’s relationship, and making running the business difficult. Let’s see if Marcus can make a difference. 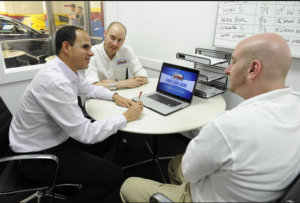 Marcus claimed that he has been buying and selling used cars since before he was even eighteen. The used car business, in general, was profitable in the United States, which presented a large opportunity for him to get in which the business was failing. Marcus showed up to the dealership, and Jonathan and Andrew took him for a tour around the building. Marcus asked pointed questions about the layout of the space, and he was shocked to learn that the rent for the building was over $20,000 a month. The two brothers explained that they both worked six days a week, but they had almost no cash, and they were unable to entice people into the store.

Marcus outlined the issues for the audience. They had a crazy overhead of approximately $100,000. Andrew and Jonathan were losing money every month since the slim margin they had on the cars was not enough to keep them afloat. Marcus pointed out that the business looked like it had not been updated since its origin in 1977. The brothers were in conflict over most things, from what colors the garage should be painted to how to handle advertising. 1 800 Car Cash had a wholesaler friend who sold the cars to a dealer, but Marcus disagreed that that middleman was necessary. He saw the opportunity to make an extra $1000-$2999 per car. That adds up when they are selling 80 cars a month.

Marcus wanted to change the way that they do appraisals so that the customer could see what was wrong with the car, and accept a lower number for the car. It was classic expectation setting, and it would make them a lot more money. Andrew saw the value in that idea, but Jonathan did not seem to appreciate Marcus coming in and telling him what to do, even though he invited Marcus to the business. You could tell that Jonathan would be the stick in the mud that could keep the business from changing in a profitable way.

Marcus sat down with the brothers and told them his plan. He saw 1 800 Car Cash as a great opportunity that would be made even more profitable by licensing the business concept for a franchising deal. This would generate passive income. Marcus told the brothers that he would help them turn 1 800 Car Cash into a profitable franchise, but he needed to make sure that the example store started turning a profit again. He let Andrew and Jonathan know that he needed to spruce the place up first and get them to have a decent working relationship. Andrew said that he feels dismissed by Jonathan and that his good ideas were going unheard. Jonathan became defensive and stated that he did not have the time to discuss the issues with Andrew. Andrew got upset, saying that he just wanted them to click as brothers and as business partners.

Marcus offered the brothers $200,000 to resolve their debt, make the changes that they needed to, and start the franchising aspect of the business. Marcus said that the catch was that he was fully in charge for the next week.Jonathan was uncomfortable with giving up control, and he thought the amount of money that Marcus was offering was too little to buy the inventory they needed. He requested $300,000 at 5.5% interest since Marcus wanted to make millions off them. They settled at a 7.5% interest rate. Marcus wrote the check, and for a week, he was in charge.

Marcus introduced himself to the rest of the employees and laid out his plan. He saw the first step as making more money, which involved getting rid of the wholesalers and fixing the appraisal process. To set up 1 800 Car Cash as a franchise, they needed efficient and consistent branding. The building and the appearance would need to change. Marcus got Andrew’s ideas on it, and Andrew said he wanted to modify the awning and the floor. Jonathan immediately shot him down. Marcus had Jonathan sit down with Andrew, and made him take the time out to listen to him. It did not go well. Jonathan told Andrew, who was the marketing director that it would be a waste of time to have him do the radio ads. He apparently did not trust Andrew with the responsibility. Marcus told Jonathan that he was a terrible manager of people.

Marcus got contractors to come in and tear the 1 800 Car Cash building apart. As they were working, Jonathan approached Andrew and began screaming at him regarding what he considered excessive spending on office furniture. Jonathan demanded that Andrew runs every purchase through him first, and not spend “money on pretty things to make the room look nice.” Marcus asked why Andrew allowed his brother to talk to him like that, and Andrew did not have much of an answer. Marcus took it upon himself to confront Jonathan, telling him that it was unacceptable for him to be yelling at his brother like that over a couple thousand dollars. Marcus took Andrew aside to let him know that he paid for Andrew to have the chance to do a 30-second radio and TV spot without the pressure of his brother’s scrutiny. This would allow him to have tangible success to show Jonathan and might get Jonathan to trust him more.

Marcus came across Jonathan appraising a car with wholesalers hovering over him. Marcus took Jonathan into the back offer to inform him that he was to sell the cars to dealers only. Jonathan tried telling Marcus that he knew more about his personal wholesalers then Marcus did, but Marcus made him an ultimatum – either the wholesalers left, or Marcus would take his money and go. Jonathan made the right decision, and told the two wholesalers to leave, even though they had been doing business with 1 800 Car Cash since their father owned it. The wholesalers left in a huff.

Andrew went to the recording studio with Marcus after coming up with the scripting. It took him a bit to get the confidence to make a strong commercial, but he was able to get it down. The results impressed Jonathan. Between the commercials and the remodeling, 1 800 Car Cash was able to become profitable again, and the franchises began to take off as well. Let’s see how they did down the line. 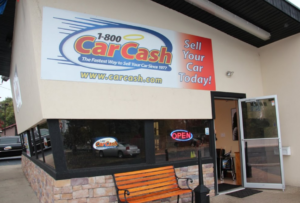 1 800 Car Cash is still going strong in 2017. It was featured on the first episode of The Profit, so it is impressive that it is still up and running. They have well over 100 locations, and the advertising is just getting better and better. I have the jingle in my head as I write this. Since the episode aired, 1 800 Car Cash has become a sponsor of NASCAR for national car purchasing. Their customers seem to love them as most of the Yelp reviews for individual Car Cash locations are four stars or above.