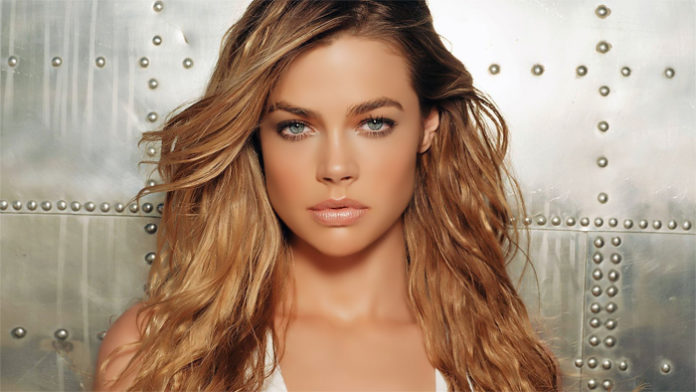 A former fashion model, Denise Richards first gained the attention of audience members with her portrayal in the film, Starship Troopers (1997). Born in Downers Grove, Illinois, she started out her career as a model, shortly after graduating from high school in 1989. Travelling to various cities such as Tokyo, New York, and Paris, the blonde eventually branched out to commercial work on television. At the age of nineteen, Richards made her small screen debut in an episode of the drama series, Life Goes On (1990). Continuing to make a number of guest appearances, she later appeared in the shows Saved by the Bell (1991), Married with Children (1991), Doogie Howser, M.D. (1991), and Beverly Hills 90210 (1992). In 1994, the aspiring actress entered the world of film after she was cast as a small role in the romance movie, Lookin’ Italian. That same year, she also played the title character in the sci-fi comedy, Tammy and the T-Rex (1994). Several other roles later, Richards received a big break when she was cast as one of the main leads in the adventure film, Starship Troopers (1997).

Her first role in a high-profile film, it gave her the opportunity to showcase her acting talents to the world. Praised by critics for her portrayal, the sci-fi flick eventually garnered her a Blockbuster Entertainment Award nomination for “Favorite Female Newcomer” in 1998. A couple of years later, Richards’ career met yet another break after she was cast as one of the main protagonists in the James Bond action thriller, The World is Not Enough (1999). A major blockbuster, it earned the actress yet another Blockbuster Entertainment for “Favorite Actress in an Action Film” in 2000. From there, she was subsequently cast as the female lead in the slasher film, Valentine (2001), where she co-starred alongside David Boreanaz, Jessica Capshaw, Katherine Heigl, and Marley Shelton. Around that same time, Richards also portrayed a recurring character in the popular TV series, Spin City (2001).

So what has the Illinois-native been up to these days? Has she taken on any new roles  on television or film as of late? Will she be gracing us with her presence anytime soon? What happened to Denise Richards? Where is she now in 2018? 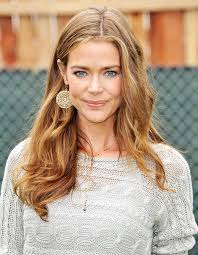 Born on February 17, 1971 in Downers Grove, Illinois, Denise Lee Richards is the daughter of Irv and Joni Richards, a coffee shop owner and a telephone engineer; the oldest out of two siblings, she has a younger sister named Michelle and is of French-Canadian, Welsh, and German descent. After spending the initial part of her childhood in between Downers Grove and Mokene, she and her family relocated and settled down in Oceanside, California, where she attended a local high school as a teen. An avid athlete as a child, Richards was especially fond of baseball as a young girl; in fact, for many years she was the only female on the team. Following her graduation from El Camino High School in 1989, she started to work as a model, a career that brought her to various big cities such as New York, Tokyo, and Paris.

After appearing in a number of television commercials, she made her official acting debut in an episode of the TV series, Life Goes On in 1990. Continuing to put herself out there through auditions, she subsequently landed a few small roles in the shows Saved by the Bell (1991), Married with Children (1991), Doogie Howser, M.D., (1991), Beverly Hills 90210 (1992), and The Ben Stiller Show (1993), to name a few. In 1994, the then twenty three year old made her motion picture debut in the romance film, Lookin’ Italian. Later that same year, she was chosen to play the title character in the sci-fi flick, Tammy and the T-Rex (1994). Over the next few years, Richards continued to play various minor characters, often making guest appearances in series such as One West Waikiki (1995), High Tide (1995), Weird Science (1996), and Melrose Place (1996).

Various low-budget movies later, Richards received a big break when she was cast as one of the lead characters in the film, Starship Troopers (1997). 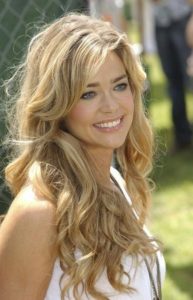 Directed by Paul Verhoeven, the science fiction film chronicled the adventures of a young soldier and his exploits in a futuristic military unit known as the Mobile Infantry. As he continues on with his mission, he is eventually promoted to an officer in the midst of an interstellar war between humanity and the Arachnids- an insectoid species from space. Based on a novel of the same name by Robert A. Heinlein, it featured actor Casper Van Dien as John Rico. Playing the role of the lead female protagonist, the film saw Richards as Lieutenant Carmen Ibanez- John’s girlfriend and best friend who later becomes a spaceship pilot in the movie. Other members of the main cast include Jake Busey, Neil Patrick Harris, Patrick Muldoon, Clancy Brown, and Michael Ironside.

Filmed in Natrona County, Wyoming, Starship Troopers was released in theaters on November 7, 1997. During its opening weekend, the movie brought in approximately $22 million in ticket sales; altogether by the end of its run, it had grossed $121 million worldwide against a budget of $105 million. While it was a moderate commercial success at the box office, it garnered many negative reviews from contemporary critics. Having said that, Starship Troopers did go on to receive an Academy Award nomination for the category of “Best Visual Effects” in 1998. Over a decade after its original release, the movie was ranked as one of the Top 100 Films of the 1990’s by Slant Magazine.

Richards’ first major role in a high-profile film, it not only earned her widespread attention and praise, but it also netted her her first industry accolade- a Blockbuster Entertainment Award nomination for “Favorite Female Newcomer” in 1998. 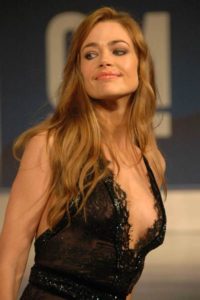 Rising in prominence, the actress later co-starred in the erotic thriller, Wild Things (1998) the following year alongside Neve Campbell, Kevin Bacon, Theresa Russell ad Matt Dillon. Produced by Steven A. Jones, and Rodney M. Liber, it centered around a high school counselor who after being accused of rape by two female students, employs the help of a lawyer to defend himself in the case; at the subsequent trial however, the two later admit that they had lied in order to get revenge on the man. As it is later revealed however, the three had been accomplices all along, all of whom had had their eyes set on the Kelly’s mountain of wealth. While Dillon played as Lombardo, Richards took on the role of Kelly Lanier Van Ryan- the popular, wealthy teen; her partner in crime, Suzie Toller was portrayed by Campbell.

Created on a budget of $20 million, Wild Things was was released nation wide on March 20, 1998. Over its opening weekend, the film grossed over $9.6 million; the figure eventually went up to a total of $55.9 million by the end of its theatrical run- rendering it a financial success. Met primarily with positive reviews, the film’s cast in particular received much praise for their stellar performance; it also earned Richards an MTV Movie Award nomination in 1999, which she shared with her co-stars Campbell, and Dillon.

Richards’ next big break came just a year later, when she was cast as one of the main characters in the James Bond film, The World is Not Enough (1999). The ninth installment of the series, it centered around the secret agent (played by Pierce Brosnan) as he is tasked with protecting a billionaire’s daughter after the former is assassinated by a wanted terrorist; as part of his scheme, Bond later ends up triggering a nuclear meltdown in Istanbul. Playing as one of 007’s assistants, the actress took on the role of Dr. Christmas Jones- a nuclear physicist who helps Bond with his mission. In addition to the two actors, the film also starred Robert Carlyle, Robbie Coltrane, Michael Kitchen, Judi Dench, and Colin Salmon.

Following an initial premiere in Los Angeles, The World is Not Enough was released on November 19, 1999. Quickly making its way to the top of the North American box office, it grossed a staggering $35.5 million during its opening weekend; by the time it came off the screens, it had grossed more than $361 million worldwide- well over double that of its production budget of $135 million. Perhaps ones of the highest-profile films that Richard has ever taken part in, her performance in the movie later earned her another Blockbuster Entertainment Award nomination for “Favorite Actress in an Action Film” in 2000. 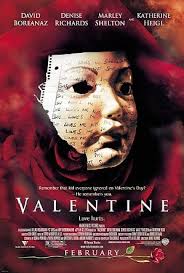 A year after the arrival of the new millennium, Richards was chosen to star in Jamie Blank’s American slasher film, Valentine (2001). Based loosely on a book of the same title by Tom Savage, it centered around a group of women who find themselves being stalked by an individual who they had tormented as children. One of the said females, the actress played the character of Paige Prescott; she was joined in front of the cameras by Marley Shelton, David Boreanaz, Jessica Capshaw, Jessica Cauffiel, and Katherine Heigl.

A week after its theatrical release on February 2, 2001, the Warner Bros. Pictures film had grossed over $10 million in the United States; it eventually went on to earn an additional $10 million in ticket sales, bringing its total gross to over $20 million.

Judging from her official IMDb page, the actress has many projects in store for this year- including a made-for television movie called, Tomboy (2017). In terms of projects on the big screen, she will be starring in Matthew Berkowitz’s upcoming action thriller, Choke Hold (2017), which will depict the struggles faced by a martial arts fighter, after he finds his one night stand murdered in his home. In the film, the actress will be playing the lead role of Victoria.

Speaking of thrillers, Richards will also be starring in Ash Avildsen’s American Satan (2017) which is also scheduled to be released sometime this year. Some of her other upcoming projects include Adi Shankar’s God and Secrets (2017), and Altitude (2017).

If you’d like to keep in touch with the 46-year-old actress, you can do so by following her on social media- you can find her on Twitter at @Denise_Richards.