Before he appeared on Shark Tank, Stephen Chen was prepared. Knowing that the Sharks look for certain elements in their entrepreneurs, Stephen made sure to have good sales of his Petnostics product, which was a small cup with a urinalysis strip on the cover that allows pet owners to diagnose their pets health issues. Even better, Petnostics technology is patented! Let’s take a look, and see how Stephen fairs in the tank. 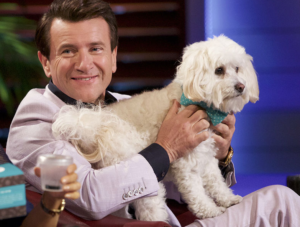 Stephen Chen walked out onto the stage, and into the Shark Tank. He was carrying a fluffy white dog that he called Austin. He introduced the both of them, and Ask the Sharks for $300,000 in exchange for 10% of his company, Petnostics. Steven claimed that since everyone loved their pets like they were children, it was critical to monitor their health on a regular basis. Since pets cannot communicate their issues as children can, Steve got the ideas to create Petnostics. It’s system allowed pet owners to monitor their pet’s health instantly by using their smartphone to analyze the pet’s urine. The camera panned towards Mark and Kevin, who looked disgusted.

Steven brought a container of blue liquid that he said would serve as Austin’s urine for this experiment. It was in a specialized Petnostics cup that had a lid with the same chemical test strips that are used in clinics. Once the pet owner collects the sample, they can just screw the lid on to the cup and flip it over. The test pads would change colors depending on if the pet was healthy or not. The smartphone app with them scan the container lid and analyze the color changes. The pet owner to any possible health issues. It was able to detect anything from urinary tract infections to diabetes, as well as if your pet is dehydrated. The results were easily readable on the Petnostics app. they could also be shared between family members and the dog or cat’s vet.

Steven said that the best part of the Petnostics system is that you didn’t have to spend the money on a vet visit or leave your home. Stephen ended his presentation with a pee joke, asking them who was in. Robert gave a forced laugh. Stephen said that he had samples, and told the Sharks to ask any questions that they may have. As Stephen carried the tray of samples to the sharks, his dog Austin scampered behind him. Lori said that he was the cutest dog. Robert took his sample quickly, and then immediately turned to greet the dog. By the time Stephen was done handing out samples, the dog was on Robert’s lap.

Guest shark Ashton Kutcher was the first to ask Stephen a question about Petnostics. Ashton wants to know how the pet owner was supposed to capture the urine sample. Stephen told him that was an excellent question, and said the most pet parents know that pets follow a schedule when relieving themselves. He said that when he was walking Austin he could tell when the dog was about to pee, and he got the cup behind him to take a sample. Ashton laughed, and if the premise of this product was really to let your dog piss in your hand. Lori had already opened her box, and show that there was a glove inside. The Sharks were all laughing. Stephen quickly said that there is another option for pet parents that had trouble collecting the urine. The Petnostics urine collector was a ladle with an extendable handle. Mark Cuban said that it was a selfie stick for pee.
Stephen insisted that this was good for female dogs to squat when they pee. He demonstrated using the Petnostics ladle for that purpose. Mark Cuban groaned and put his head in his hands. Lori asked how much urine a pet owner would need to collect in order for the diagnostics in the Petnostics cup to work. Stephen said that is just a little tiny bit in order for the strips to be covered. Kevin asked what it cost the consumer to get all the paraphernalia for the pee collection. Stephen told him that the cups cost $10 each. Kevin wondered how much the Petnostics cup cost him to make, and Stephen told him it was $2 per cup. Ashton asked him how much he could get the cost down if he produced at volume. Stephen said that it would cost about $0.90 per cup. Kevin asked if it was a one-time lab, and Stephen affirmed that it was.

Mark wanted to know how many cups they’ve sold so far, and to how many customers. Stephen said that they’d sold 10000 cups so far. Robert seemed surprised, and Lori wanted to know what period of time that was. Stephen stated that he started Petnostics in April of 2014. 2014 Robert asked how the cups were sold, and Stephen told him that they have just done all the selling through their website as well as retail stores in Southern California. He said that that’s in that area have likened the product to a check engine light. The urine sample could indicate that something was wrong and then the vet could take care of it. This would eliminate a costly unnecessary visit.

Ashton inquired about Stephen’s background. Stephen said that he did industrial engineering at the University of Michigan. Mark wants to know if Stephen owns the original intellectual property. Stephen said he did with four issued patents around the technology. Mark wants to know what exactly that technology was, so see if Stephen explained that it included the totality of the strip on the cup as well as the algorithms of the color collaboration of the testing. Stephen continued, stating that the patents cover a broad range of uses. He saw the next step as going into the human market.

Ashton told Stephen that his biggest barrier to investing in the product would be the urine collection. He simply did not want to do that. Ashton has seen things in the human market that allowed people to take a tiny blood sample to get diagnostic information and he was wondering why it couldn’t be used for Petnostics. Stephen explains that most pet owners don’t like to use at home blood collection methods because most parents would feel bad taking blood from their animal. Robert wanted to know where the value was being added to the consumer. He asked if it was cost-saving versus going to the vet.

Stephen again referred to the idea of Petnostics as a check engine light. Robert pointed out that a Check Engine line is passive, while you had to take action to make the Petnostics work. And unfortunately, that action would cause the pet owner to have to stick their hand underneath their dog’s pee stream. Stephen said that the impetus to do that would be At the direction of a veterinarian. Ashton stated that the problem was that a vet would want pet owners to bring their animals and as much as possible to generate revenue for them. He asked why the vet would provide this convenient thing that would lose the money.

Robert told Stephen that while he believed in the product, he did not see a very clear business model. Because veterinarians want to make as much money as possible, it did not have a distinctive distribution channel- vets would rather make the money themselves instead of giving the business to Petnostics. Robert went out, still petting Stephen’s dog Austin. Kevin asked Stephen to walk him through the numbers. He asked what the revenue would look like for 2016. Stephen explained that Petnostics was set to make $200,000 in sales for the year. Kevin sounded exasperated and asked if he was not making any money yet. Stephen admitted that Petnostics was still prerevenue.

Stephen explained that there were new tests designed to diagnose specific diseases, and he was looking to make $400,000 in sales the next year with the aid of those new products. Kevin pointed out that Stephen did not have a clear indication of what his sales channels would be. Ashton asked more about the patents, and Stephen explained that the patents were specific to the types of diseases that were being diagnosed, which makes the product commutable to the human market.

Mark said that he was involved in the human side of self-diagnosis kits, but he saw the strip technology as “having a life cycle.” He, unfortunately, did not see it as a long-term lifecycle, and he went out. Ashton said that he thought Stephen had something interesting, and he also saw a vast target market for the product. Ashton was just concerned about having to take the urine sample, and he went out. Lori said that she was surprised that Ashton did not make him an offer anyway since they would be able to sell a lot before someone came out with a better way of sample collection.

While Lori was musing over that, Kevin spoke up about his concerns over distribution. He said that he wanted to reflect that risk in his offer, which was $300,000 in exchange for 15% equity stake in Petnostics. Stephen started to speak, but Ashton interrupted him. Ashton wanted to know why Kevin was offering a straight equity deal when he usually throws royalties and other complications into his deals. Kevin claimed that he was just trying to figure out which channel would be the best to sell through.

Lori said that she thought the idea was interesting, and she made an offer for $300,000 in exchange for 20% of Petnostics. Kevin told her that he did not believe it was a QVC product, but Mark thought that QVC would “crush it.” Stephen had a choice to make. He thought it through out loud, saying that he knew Lori could handle the retail side while Kevin would be right at the veterinary side. Kevin claimed he could do both. Stephen waffled, and asked Lori if she would consider 15%. Kevin said that he would be willing to go in with Lori for 20%, but rescinded his previous deal. Stephen accepted, and Lori jokingly said that she would get the dog in the deal.

Petnostics Now in 2018 – The After Shark Tank Update 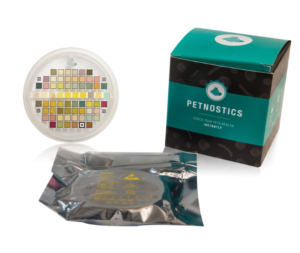 After securing a deal with Lori and Kevin for his doggie pee test, Stephen Chan went on to work with Fetch for Pets, which is a manufacturer and wholesale distributor of pet products. In April of 2016, Petnostics put out a press release that announced their intention to do a pilot run of Petnostics with an unnamed marketer and producer of “pet foods, treats, and litter.” You can follow Petnostics on their Twitter page, or on Facebook. If you are interested in purchasing a diagnostics kit for yourself, they are available on the Petnostics website, or on Amazon.