In her introduction video, April Morris applied lip gloss in front of a small makeup mirror. Her voiceover introduced her and claimed that she created a product to help women look and feel fabulous. The next scene switched to an office setting. April said that she felt like her business made her feel like any dream is possible, after feeling for so long that her dreams were dead. She had big plans for her life that were “abruptly ended” when she got pregnant at 17. Soon after, she got married and had another child.

Unfortunately, her marriage ended in divorce, and April ended up a single mother raising two kids on her own. This inspired April to figure out a solution to be successful despite her hurdles. She had an idea for a product, but did not have the funds to launch it. Instead, April began a career in real estate, where she was very sucessful. Once she had the money to start her business, she quit real estate to launch her business. She invested all of her savings to start up, and she was running out of money. She wanted the Sharks to help her be successful. 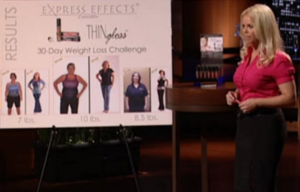 The video ended, and April walked out onto the stage, and into the SHark Tank. She introduced herself, and asked the Sharks for an investment of $80,000 in exchange for a 20% equity stake in her company, Thin Gloss. April launched into the story behind the lip gloss. After being called chubby at a Christmas Party, she started to take diet pills which were effective, but she was experiencing bad side effects. April stopped taking the pills. She was sitting at a stop light applying lip gloss when she had a eureka moment. April began to wonder if there was something like an herb or a fragrance to put in lip gloss to help women lose weight.

April began researching, and she discovered Hoodia, which is a South African herb known for appetite control. She did more studies on aromas that when inhaled, boost mood and enhance energy. She began to develop her product by combining the ingredients into her product, Thin Gloss. The camera panned to a chart explaining the three steps to Thin Gloss. April narrated that the first move was to inhale the aroma of the lip gloss 30 minutes before planning to eat. Step two was applying it, and step three was smiling and enjoying the benefits.

Robert asked what her sales for Thin Gloss looked like. April explained that she made $26,000 by the end of the previous year. Kevin wanted to know what she was on track to make for the current year, and April claimed that her personal goal was to hit one million dollars in sales by April 2010. Kevin stopped her and asked what her current sales for the year are, and April looked a little sheepish as she said $18,000. Kevin told her that she might not even get to last years sales at that rate.

April claimed that she knew for sure it was going to make it because she had new product ideas in the works. Kevin Harrington asked her if she had done any studies that would allow her to make the claims that Thin Gloss would boost the mood of its users, and help them to lose weight. April explained that she had spoken to an FDA attorney about Thin Gloss enhancing the appearance of women as a cosmetic, and she was able to tell her potential customers to try it for themselves, and see how it works for them. Kevin informed her that she was not pitching Thin Gloss as a regular cosmetic, but as a weight loss aid. Robert asked if April would be allowed to make those claims, and Kevin H. informed him that she would need a clinical study to back them up.

Robert asked if he would be able to try it, and April brought him a sample. As she passed out samples to the rest of the Sharks, Barbara asked what the thinking was behind asking for people to trying smelling it 30 minutes before a meal. April claimed that she discovered that inhaling some smells through the nose would improve her mood. In the background, Kevin O’Leary applied some Thin Gloss to his lips. Robert said that it smelled great. Daymond asked April what made her think that she could make it all the way to one million dollars when her sales had not even reached a tenth of that.

April told him that she made a deal with one of the largest cosmetic companies in India to begin to distribute Thin Gloss. Robert laughed at her and asked her why she thought that would make her a million dollars. April claimed that India is supposed to be up and coming for the cosmetic industry. Kevin asked her if she was going to India to get around having to do clinical studies to back up her claims. April paused, and when she answered, she stuttered a bit. She said that she was in line with the guidelines according to the FDA attorney she spoke to before.

Kevin stated that she would not be able to put the product in a big box store with a sign that claimed that Thin Gloss would help women lose weight. April said that her pitch would be that women should try it for themselves, but otherwise, it is still a cosmetic designed to enhance women’s appearances. Kevin said that she was already saying it in her presentation materials. Robert tried defending April, saying that she was not actually stating that, but Kevin H. pointed out that her documents showed before and after pictures. Photos like that legally implied weight loss. Robert asked April if she’d been to INdia, and she informed him that she had not. Robert explained patiently that India is one of the poorest countries in the world, and he had difficulty imagining that the women would purchase lip gloss to lose weight when people were starving. Robert warned her against a distributor that would promise her a million dollars in sales under those conditions.

Kevin H. explained that there were hefty import duties on any product going into India. April claimed that she wasn’t totally relying on India since she had other deals lined up in America. Daymond says that anyone can be a distributor if they take her money and promise to sell. He wanted to know who was offering her money at the time she signed, and April said that no one was. Kevin said that he was concerned about agitating the government if he funded her, and Thin Gloss got big with her weight loss claims. April said that her intention was to work within the FDA guidelines. It sounded like she was getting frustrated at this point.

Robert asked how much each tube of Thin Gloss cost, and she informed him that they were $28 each. All of the Sharks were shocked. Robert wondered how much lip gloss was normally, and Barbara told him $8. April said that a woman could get an $8 lip gloss at a drug store, but department stores charge much more. Robert asked how much it cost her to make, and she told them $5. Kevin congratulated her on her margins. Barbara asked April if she’d lost weight with the product, and April said she’d lost 18 pounds. Kevin H stated that he was out, and Daymond quickly followed.

Kevin O’Leary stated that he appreciated what she’s done with the product, but he was too concerned about the legal repercussions to invest. He went out. Barbara said she was uncomfortable with the sales pitch, which was an implied benefit that could not be clarified due to the legal issues. She went out as well. Robert said that he did not have a problem with her legal gray area, but he was concerned about her expectations to go from making so little to netting a million dollars in twelve months. He went out, saying that none of his businesses have ever grown that fast. April thanked them and walked offstage. She claimed that she was not discouraged in her exit interview, but she also started to tear up. Let’s she how Thin Gloss did without a Shark’s assistance.

Thin Gloss Now in 2018 – The After Shark Tank Update 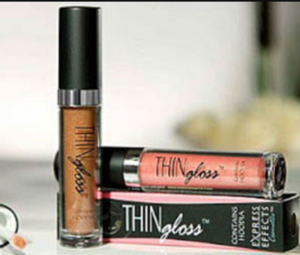 Thin Gloss may not have gone over well with the Sharks, but she definitely experienced the now famous Shark Tank effect. Thin Gloss struck a cord with female viewers of the Shark Tank, and she was easily able to meet her ambitious million dollar goal. Unfortunately, if you were interested in trying Thin Gloss for yourself, it is no longer on the market. As of April 2012, April sold all the remains of her Thin Gloss inventory and moved on with her life. She went into the lucrative business of motivational classes for a bit. April still updates the Thin Gloss Facebook fan page, and she has done several Shark Tank related appearances since her episode aired. You can keep up with her on that page by clicking here.