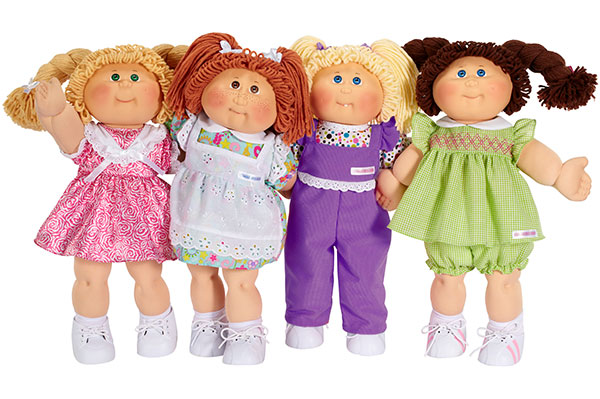 During the 1980s, Xavier Roberts’ unique Cabbage Patch kids erupted into immediate popularity. Before he struck his claim to fame though, he had relatively humble beginnings. The idea behind Cabbage Patch Kids was inspired by an old German fabric technique called “needle molding”. Using this technique, he began creating dolls that he called Little People Originals.

Xavier took his hand crafted dolls to various art shows in different locations until eventually Atlanta Weekly Magazine picked up his story. The growing success of the dolls was later documented through both The Wall street Journal and Newsweek.

After signing contract with Appalachian Artworks, Inc. in 1982, Xavier changed the name of his dolls to Cabbage Patch Kids. It didn’t take long for these unique toys to start flying off the shelves. The dolls he created were all distinctly recognizable by their original features and fabrications. Cabbage Patch Kids came in varying ethnicities and were targeted at both girl and boy audiences. But how popular are these dolls now? If you are a collector who took good care of your dolls from the 80s, you might be able to get up to a few thousand dollars for your Cabbage Patch Kid. 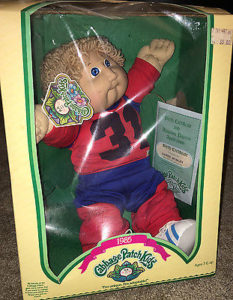 This 1985 James Dudley Cabbage Patch Kid is in pristine condition and currently going for $3000 on Ebay. Its condition is marked as new, meaning that the doll hasn’t been taken out of its original packaging and includes all original accessories and papers. There doesn’t seem to be a high demand for this particular doll because of its expensive pricing, but there have been inquiries made on the auctioning website.

Another doll being sold on Ebay is an out of package, blonde girl doll. Although this one is selling for less, there are more people sitting on the item because the doll comes with the original signed “birth certificate”. The birth certificate is signed by Xavier Roberts himself, making the doll a little more rare and personal. This blonde girl doll is also a part of the Little People Original line, which makes it more of a rarity, and thus in higher demand than the packaged James Dudley doll. 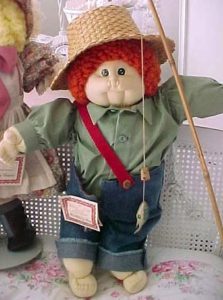 Sawyer. The collection includes three Xavier Robert’s soft sculpture dolls. These three dolls have been designed to mimic the descriptions of Tom Sawyer, Huckleberry Finn, and Becky Thatcher. What makes this set so special is that the characters represent the kids who are a part of an American classic that kids today still read to this day. On Ebay the asking price for this particular set is $850 because all original adoption certificates for these dolls are intact and included upon purchase. However, there are other versions of this Cabbage Patch Kid collection going around on Ebay for slightly cheaper. 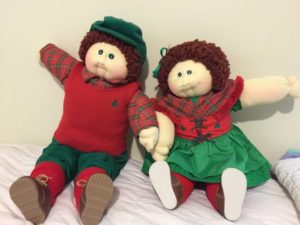 The next Cabbage Patch Kids to make it on this list of Most Valuable are a pair of special edition fraternal twin dolls. On Ebay, these dolls are out of package. However, both of their original birth certificates and adoption papers from BabyLand General Hospital are included upon purchase. These dolls are also unique because of their Ireland heritage. They come dressed in red and green clothing to accentuate as much.

Maureen Miriam is a Little People original doll who was also made at the BabyLand General Hospital. She is being sold through a seller on Etsy, who claims that all of her clothing are original, aside from her pacifier. Maureen is a soft sculpture baby doll, unlike the more common young children dolls. Although this doll does not come with any of the original adoption papers or birth certificate, she is in great condition with no pulls or tares in her clothing or body.

Georgiana is an African American doll that came out with the Southern Belle collection. Although she is a doll from later on in the Cabbage Patch Kid craze, she is still in great condition and nearly 30 years old! Georgiana has long pigtail braids and is dressed in her original outfit. She is another doll being sold through Etsy. Her current owner states that her original papers and name tag will be included upon purchasing.

This lemon haired doll is a part of the Designer Line kids, who appeared for a short time while 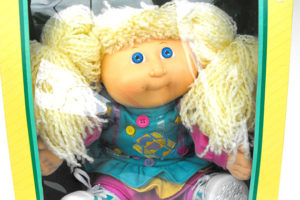 Coleco and Hasbro were in a quick transition period. The dolls that came out under this line came out with a “P” factory tag, which signifies they were made by the Perfecta Factory. This factory was one of two under the Coleco brand that made Cabbage Patch Kids and after the transition, they stopped production altogether. This blonde girl doll has wild pigtails and comes dressed in her original clothing. Aside from a snagged threads in her clothing and body, she is in great condition.

Being sold unopened from his original packaging, Boyce Lorenzo is Cabbage Patch Kid Preemie. This means he is he’s a part of the actual baby baby dolls. Because his box has never been opened, he is being sold in pristine condition through the Etsy seller “ecofriendlyfreckles”. Boyce is dressed in soft baby blue clothing and whoever decides to give him a new forever home will be able to sign the birth certificate themselves because it is inside the the box, completely untouched by anyone else.