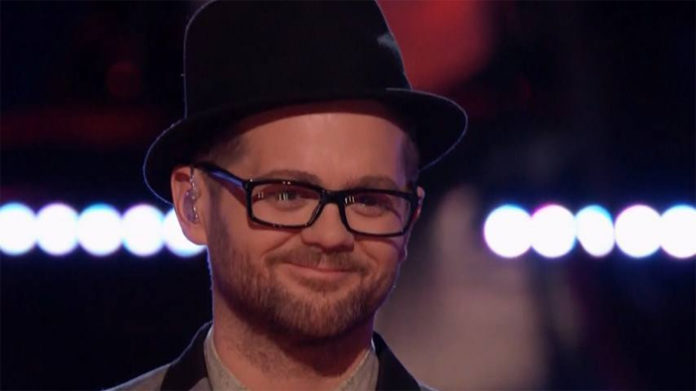 American soul singer Josh Kaufman is best known for being the winner of the sixth season of the singing competition series, The Voice. Born and raised in Florida, his musical talent was apparent ever since he was a young boy. A skilled vocalist, he was an active member of the school choir as a teen. Later wanting to test his luck, he participated in the reality game show, Star Search at the age of sixteen; while he didn’t end up going home with a title, it offered him some experience under his belt. From there, it wasn’t until 2011 that he refocused his attention on television. That year, he auditioned for the first season of The X Factor, although he ultimately did not make the cut. Persevering, Kaufman later tried out for the sixth season of NBC’s The Voice in 2013. Unlike his previous attempts however, he easily scored a coveted spot in the competition after wowing the judges’ panel at the auditions.

Joining Usher’s team alongside a number of other aspiring singers, Kaufman soon found himself advancing through the different challenges. Before long, he was standing on the stage as one of the finalists, beside fellow competitors Christina Grimmie and Jake Worthington. After giving a grand performance during the live finale, it was announced that he was the champion of the entire competition in May of 2014- making him the oldest winner in the series’ history at the age of thirty eight. Some of the songs that he sang on The Voice include It Will Rain, I Can’t Make You Love Me, Every Breath You Take, Set Fire to the Rain, This is It, One More Try, and Love Runs Out. As the winner, Kaufman was offered a hefty cash prize as well as a recording contract with the Universal Music Group.

Since then, the Florida-based singer has released two full length albums, two singles, and an extended play- most of which feature material written and performed by Kaufman himself. A few of his popular hits include Song of Redemption, Let it be Real, Fallin’ Again, I Hear You, Carry On, Do You Want Love, and Waving Goodbye. Aside from his solo works, he has also contributed to The Voice’s Complete Season 6 Collection album, which was made available in stores shortly after his win on the show. As of 2017, Kaufman’s latest musical release is that of his 2016 self-titled EP, Josh Kaufman. Although music is his main focus, he has also appeared in a Broadway production of Pippin in 2014.

So what has the former The Voice champion been doing in the recent years? Did his win on the show set him up for a successful career in music? What new projects can we expect to see from the soul singer this year? What happened to Joshua Kaufman? Where is he now in 2018? 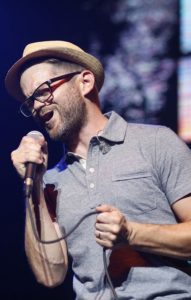 Born on November 9, 1976 in Sarasota, Florida, Joshua Kaufman is the son of Beth Gilbert, a music minister at a Virginia church and Mark Kaufman, the owner of a roofing company. Growing up in the Lake Wales area, his talents for music and singing were apparent at a young age. As a teen, he went to the local Blacksburg High School where he was an active member of the school choir. By the time he was sixteen, Kaufman had participated in the nation-wide television reality show, Star Search; unfortunately he did not obtain the winner’s title despite his best efforts. After spending most of his youth in Virginia, he moved to Anderson, Indiana following his high school graduation to study at Anderson University.

From there, it wasn’t until 2011 that Kaufman decided to try his luck at Simon Cowell’s new reality show, The X Factor; however he ultimately did not make the cut. Around that time, the aspiring musician was also a member of an Indiana-based soul and rock band called The New Etiquette. Originally established in 2010, the lineup consisted of Ryan Koch, Nate Gray, and Kaufman himself. A relatively popular group in the local scene, they dropped an eponymous EP in the spring of 2012, which further increased their popularity in the Indianapolis area. To financially support himself, Kauman also worked at a local sandwich shop and as a SAT preparatory tutor from 2011 until 2014.

Joshua Kaufman on The Voice

In the summer of 2013, another opportunity came Kaufman’s way- this time in the form of the NBC reality competition, The Voice. Jumping at the chance to gain recognition for his work, he decided to audition for the show’s sixth season.

For the blind auditions which took place over a period of five weeks, the Florida-born singer decided to sing a rendition of George Michael’s 1988 classic, One More Try. The last to go during that round, he easily earned the applause of all four judges- Adam Levine, Shakira, Usher, and Blake. After some contemplation, Kaufman chose to join team Adam.

Following the end of the auditions, the subsequent Battle Rounds kicked off on March 17, 2014. Paired up against fellow teammate Austin Ellis during the third week, the two both performed Happy by Pharrell Williams, after which Kaufman advanced through to the next round.

After the end of round one, the contestants were once again paired up; this time, Kaufman went up against fellow competitor, Delvin Choice. The last to perform during episode fourteen, the two sang Signed, Sealed, Delivered I’m Yours by Stevie Wonder. Despite his previous success however, Kaufman found himself defeated by Choice; luckily, he was “saved” aka “stolen” by Team Usher.

Now a member of Usher’s team, Kaufman’s next appearance was in episode twelve where he performed a cover of Bruno Mars’ hit song, It Will Rain. By the end of the playoffs, he alongside two other teammates had advanced to the live shows. Among those eliminated from the competition at this point were Melissa Jimenez, Stevie Jo, Morgan Wallen, Jake Barker, Deja Hall, and Patrick Thomson, and a few others.

From there, The Voice advanced to the final phase of the competition, the live shows. During the first week, Kaufman performed Stay with Me by Sam Smith which effectively made him the first contestant of the season to receive the iTunes bonus multiplier; it eventually reached number five on the Top 200 Singles chart.

For week two, Kaufman sang This is It by Kenny Loggins which earned him the public’s vote. For this round, Christina Grimmie of Adam Levine’s team earned the bonus multiplier. Before long, only a handful of competitors were left during the quarterfinals. In episode 25, Kaufman once again obtained the iTunes multiplier with the song I Can’t Make You Love Me by Bonnie Raitt; it later reached number two on the iTunes Top 200 Singles chart by the end of the voting window. 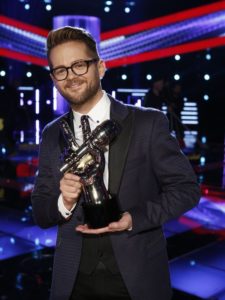 Soon, the Florida-based singer was standing among a handful of contestants in the semifinals. On May 12, 2014, he performed John Legend’s All of Me which easily earned him the public’s vote and the iTunes bonus multiplier for the third time. Ultimately, both Kristen Merlin and Kat Perkins were eliminated from the show after landing in the bottom three.

Finally for the finals which aired on May 19, 2014, Kaufman sang three songs- Signed, Sealed Delivered I’m Yours by Stevie Wonder, Every Breath You Take by The Police, and Set Fire to the Rain by Adele, the second of which was a duet with Coach Usher. By the next day, it was announced that he was the grand winner of the entire competition with Jake Worthington as the runner up and Christina Grimmie in third place.

With his band The New Etiquette, Kaufman’s first studio album was that of, The New Etiquette which was released in June of 2012. Made available online via Bandcamp, it consisted of six tracks including Do You Want Love, Falling Again, Waving Goodbye, Out the Door, On Me, and That Train. As far as credits go, Kaufman was responsible for the piano, the guitars, the synth as well as the vocals.

That same year, Kaufman and his soul music group also came out with the single, Do You Want Love (Radio Only), which was met with positive reviews from fans. 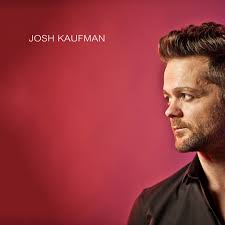 In the summer of 2016, The Voice winner dropped the long awaited extended play, Josh Kaufman. His first solo effort, it featured six songs, Digging Deep, The World, Paycheck, Avalance, Truth be Told, and All I Ask, all of which were written by the artist himself. Since its release, it has garnered numerous rave reviews from fans, many of whom have praised it for its quality of production and lyrics. The EP’s first single, Truth Be Told also came with an official music video which has since been viewed over 26,000 times on Youtube since it was first uploaded online.

Unbeknownst to many, the soul singer has actually also released an EP many years ago, back when he was in his mid twenties. Entitled Forgetting…to Remember…to Forget, it was made available in 2001. One of his earlier works, its track list included the titles Song of Redemption, Out the Door, Not Alone, Let it be Real, I Hear You, Blessed, Reaching, and Carry On. While all of the songs were performed and written by Kaufman, it also featured the production efforts of Cliff Ritchey, Ben Showalter, and Andy Farnsworth.

Outside from his solo works, Kaufman has of course also contributed to The Voice‘s compilation album, The Complete Season 6 Collection, which was released on May 20, 2014. Supported by the show itself, it ended up reaching number 92 on the Billboard Top 200 and number 14 on the US Digital Albums record chart.

Since then, the soul singer hasn’t come out with any new albums or singles. Having said that, he is still involved with his band, The New Etiquette with whom he continues to perform and record with to this day.

While Kaufman hasn’t released any new material, it doesn’t mean he hasn’t been hitting the stage. In fact just this past April, he joined Craig Finn, Joe Russo, Sam Kassirer and Jon Shaw as musical guests on the popular talk show, Late Night with Seth Meyers.

Aside from that, he also sang the traditional pre-race song at the 100th Running of the Indianapolis 500 event, which took place in May of 2016. Having said that, it’s been announced that Kaufman will be succeeded by Jim Cornelison this year.

As far as current projects go however, Kaufman has been busying organizing his Patreon page- according to his official website, he launched the site in hopes of being able to release a bunch of new songs over the next few months. For more information about this ongoing project of his, you can visit his Patreon page here.

If you’d like to stay atop of his recent projects, you’ll definitely want to drop by Kaufman’s official website at http://joshkaufmanmusic.com. Alternatively, you can also find him on Twitter at @iamjoshkaufman and on Instagram at @iamjoshkaufman.