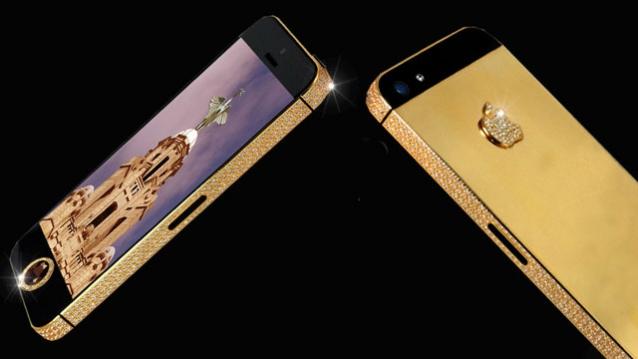 Initially a sign of status and exclusivity, smartphones are now ubiquitous. Yet nowadays, the average person shells out up to $1000 for a smartphone with good specs and a good plan. Some of the super rich are willing to spend thousands, even millions on their phones to elevate themselves above the masses. If the Apple logo isn’t exclusive enough for you, one of these 10 smartphones may do the trick.

Almost every smartphone owner buys a fancy case to protect their phone and distinguish it from others. However, Mobiado’s Grand Touch Em doesn’t need a case. Its outer casing is a work of art that is not meant to be obscured. The handmade phone casing is available in Marble, Ebony, Granite, Cocobolo, and Burl patterns.

While it works, the specifications are less than one would expect from a phone costing so much. The Grand Touch has a 4.65 inch screen, 1gb of RAM, 16GB of storage space, and 5 megapixel camera. It uses Android OS – Apple does not license its OS to other manufacturers.

The Gresso Regal Gold is a 24K gold edition of their $3,000 Regal phone. At a distance, it resembles any other phone. Yet up close, it is obviously much sleeker and modern looking than the average smartphone. Users can customize their phone for extra fees.
The Regal is handcrafted from a single plate of titanium and is only 8.8mm thick. Only 999 phones will be made. It has 2GB of ram, 32GB of storage, a 5 megapixel front camera, and a 13 megapixel rear camera. 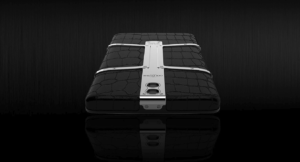 Don’t let the odd name foo you – Goldvish is serious when it comes to luxury smartphones. The Eclipse is one of their cheaper options. The Eclipse is hand-assembled out of crocodile leather and precious metals. Additional customizations can add on to its base cost of $7,688.

The Eclipse has a six lens 13 megapixel camera coupled with a dual LED flash which can record 4k video. The front camera is 5 megapixels. It also has a 5.5 inch touch screen and a Qualcomm Snapdragon processor. 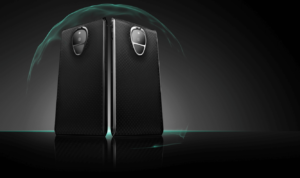 London based startup Sirin Labs targets the rich who value their privacy while wanting to quietly indulge in luxury at the same time. The Solarin is doing quite well for being the company’s first release – it has already attracted numerous millionaire investors. However, the phone has numerous vulnerabilities.

The Solarin has fingerprint detection, an 8 megapixel front facing camera, and an even more impressive 24 megapixel rear camera. The display is a crystal clear 1440p IPS LCD.Both the screen and camera lens are covered with sapphire glass. It also boasts a 4000 mAh battery, 4GB ram, and 128GB of storage space. 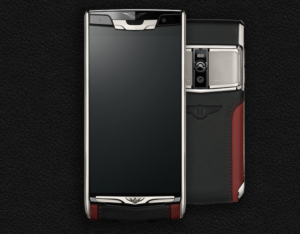 Luxury vehicle and phone manufacturers Bentley and Vertu joined forces to create a smartphone that represented both of the brands. Vertu’s New Signature touch is meant to look like a phone version of a Bentley. The outer casing of phone uses the same leather used in Bentley upholstery. It is detailed with titanium.

The Signature boasts a powerful 21 megapixel camera which can capture 4K video. It has a crystal clear 5.2 inch sapphire glass screen. Like other luxury smartphone brands, it has a 24 hour concierge and lost phone service. 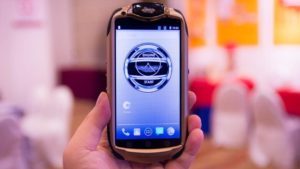 Britain’s Aston Martin does not only make luxury vehicles. They have created luxury versions of numerous everyday products. The Racing 808 smartphone is their first solo venture into the market. Previously, they were assisted by Vertu.

Like their vehicles, the Aston Martin Racing 808 has a slick and modern design. It has a Snapdragon 801 processor and a 720p 4.7 inch display. The front camera is 13 megapixels. 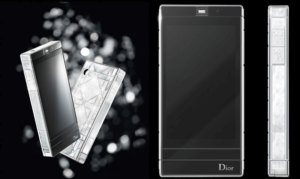 Few luxury brands are as respected as Dior. In 2012, the company released an extremely limited run of diamond encrusted six-figure smartphones. The case has 1,539 diamonds and 46 pieces of mother of pearl.

Despite its specifications being outdated today, the phone was chiefly meant to turn heads with its flashy case. There is no word on if Dior will release another smartphone at another time. 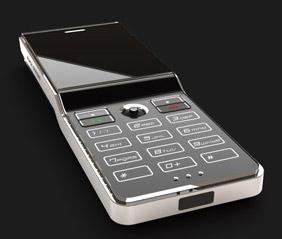 Singaporean artist Jared Goh designed the one of a kind Black Diamond VIPN for a special client in 2006. It is still one of the most expensive phones today.The phone has two 2 carat diamonds on the back and on its joystick.

Since it was created over a decade ago, the Black Diamond is very outdated in terms of hardware. Artist Jared Goh has stated that the phone is “an accessory for the diamonds”. 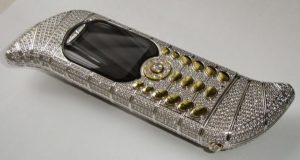 First introduced at the Millionaire fair in Cannes in 2006, the Goldvish Le Million is still one of most expensive phones ever made. Made of 18 karat white gold mounted with 120 carats of diamonds, the Le Million is stylish block of treasure. Only three were ever made.

At the time of its release, the Le Million was extremely technologically advanced. The Le Million has since established Goldvish as the leading luxury smartphone manufacturer. 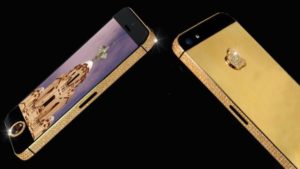 Luxury iPhones are extremely popular. Since luxury smartphone models are only unveiled once every few years. Therefore, many rich techies opt for up-to-date regular smartphones with some extra bling.

A Chinese Businessman consulted luxury phone artist Stuart Hughes to create the device. The phone took 9 weeks to create. The case is solid gold, recreated exactly to Apple’s specifications. There are 53 diamonds on the Apple logo.The centerpiece of the phone, a 26 carat black diamond is placed on the home button.