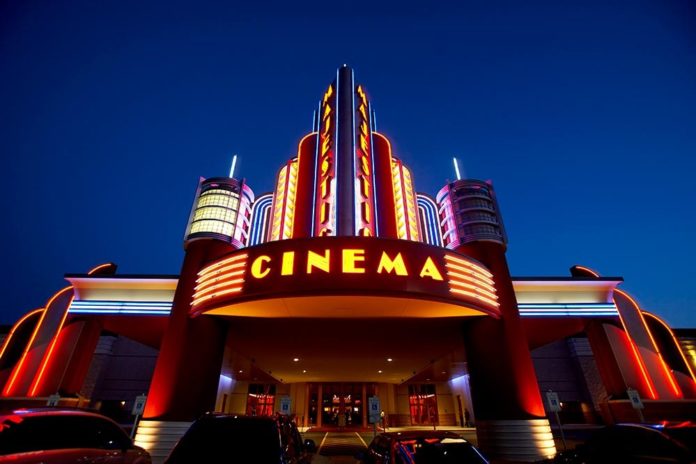 Everyone loves going to movies, even though movie tickets tend to be on the more expensive side. You may be having to pay a high price to catch a film in the theater, but it’s good to know that you’re supporting studios that put out good movies. What are some of the most commercially successful films to come out of Hollywood? In this article, I intend to answer that question, among many others. I’m going to be talking about the top ten highest grossing Hollywood movies of all time, making sure to give credit where credit is due to all of these incredible films. 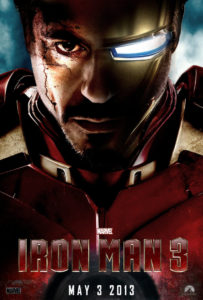 We start out our list of the top ten highest grossing Hollywood movies of all time with Iron Man 3, a Marvel Comics blockbuster distributed by Walt Disney Studios Motion Pictures. This is the third installment in Marvel’s Iron Man film series, and it was directed by Shane Black and Drew Pearce. It is largely inspired by the Extremis comic book arc, which was written by Warren Ellis. Like all of the other Iron Man films, its cast includes Robert Downey Jr. and Gwyneth Paltrow, while also introducing Jon Favreau into the mix. It is the highest grossing “threequel” of all time, and it made $68.9 million in North America on its opening day. It was a mostly well reviewed film, with critics praising its tone, which was a little bit darker than the previous Iron Man and Iron Man 2. It has yet to receive a sequel, but given the popularity of this character, I think that one is likely. 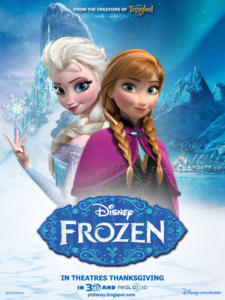 Next, it’s time to talk about Frozen, the animated Disney film that pretty much everyone heard about when it first released in 2013. Frozen is largely inspired by the old Danish fairy tale “The Snow Queen”, and it was directed by Chris Buck and Jennifer Lee. It boasts quite the talented voice cast, which includes Kristen Bell, Idina Menzel, Josh Gad, and Jonathan Groff. It had an incredible commercial and critical performance, with many people saying that it was the greatest animated film that Disney had put out in a very long time. It won many awards, including the Academy Award for Best Animated Feature and the Academy Award for Best Original Song. As far as box office performance goes, Frozen was really packing some heat. It made about $110.6 million worldwide during its opening weekend, and it is currently the highest grossing animated film of all time. (The previous holder of this record was Toy Story 3.) A sequel is scheduled to release sometime in the future. 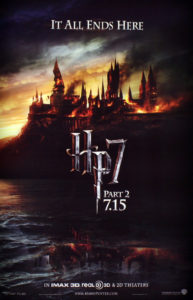 Speaking of sequels, Harry Potter and the Deathly Hallows – Part 2 is a sequel! It is the eighth installment in the Harry Potter film series, which is obviously inspired by the monumentally successful Harry Potter book series. As with all of the previous films, Daniel Radcliffe plays Harry potters, Rupert Grint plays Ron Weasley, and Emma Watson plays Hermione Granger. It was widely seen as one of the best films of 2011, largely thanks to the directorial talent of David Yates, who was responsible for directing the last four films of the Harry Potter series. At the Academy Awards, it was nominated for Best Art Direction, Best Visual Effects, and Best Makeup and Hairstyling. Considering Harry Potter’s massive fan base, it isn’t much of a surprise that the final film in the series would receive so much commercial attention. True, its midnight opening alone took in $43.5 million in North America, and its opening weekend took in $169.2 million in North America. 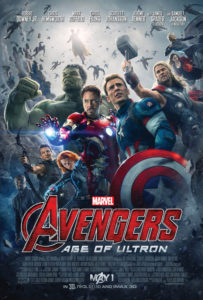 We talked a little bit about Iron Man before, and Avengers: Age of Ultron pulls us right back into the Marvel Cinematic Universe. This Joss Whedon-directed flick is the eleventh film to come out of said cinematic universe, and its ensemble cast consists of the likes of Robert Downey Jr., Mark Ruffalo, Chris Evans, Chris Hemsworth, Jeremy Renner, Elizabeth Oslen, Scarlett Johansson, and Anthony Mackie. Or, as an Avengers fan would know them: Iron Man, Hulk, Captain America, Thor, Hawkeye, Scarlet Witch, Black Widow, and Falcon. Although this is one of the more poorly reviewed Marvel films, fans of the Avengers were still very excited to see this star-studded superhero team come back onto the big screen. Avengers: Age of Ultron also has the seventh largest opening weekend of all time, making $392.5 million worldwide during its opening weekend. Its upcoming sequel, Avengers: Infinity War, is highly anticipated by Marvel fans. 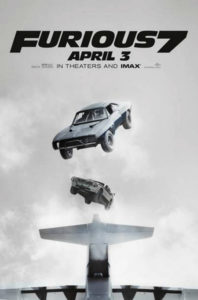 Furious 7 is the next film on our list, and as you can probably gather from the name, it’s the seventh installment in the wildly popular The Fast and the Furious film franchise. Popular cast members Vin Diesel, Paul Walker, Dwayne Johnson, and Michelle Rodriguez return to reprise their roles in the series. It’s possible that the popularity of this film had something to do with Paul Walker‘s death, which actually occurred while Furious 7 was still filming. As a result, the script had to be rewritten and his remaining scenes were completed with stand-ins in Caleb and Cody Walker. It made $397.6 million worldwide during its opening weekend, which makes for the fifth highest grossing opening weekend of all time. Like most The Fast and the Furious films, it didn’t exactly rake in Academy Awards. However, it was still seen as a strong installment in the series. Its sequel, The Fate of the Furious, is coming out this year. 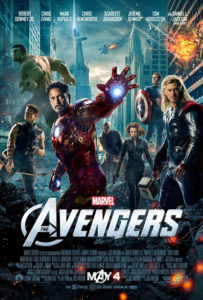 We talked a little bit about Avengers: Age of Ultron before, and The Avengers is that movie’s predecessor. It released in 2012, and it was hotly anticipated by fans of Marvel movies. Back in 2012, Marvel movies didn’t come out quite as often as they used to, and when they did, they certainly didn’t pull as many heroes into one place as this movie did. The Avengers is sort of seen as a formative film in the Marvel Cinematic Universe, and with good reason. Directed by Joss Whedon and produced by Kevin Feige, it received a lot of positive reviews and made a lot of money. It was the first ever Marvel movie to make over $1 billion in ticket sales, and at the time of its release, it was able to become the third highest grossing movie of all time. It made over $207 million during its opening weekend, which set the record for opening weekends at the time of its release. Its sequel, Avengers: The Age of Ultron, would release three year later. 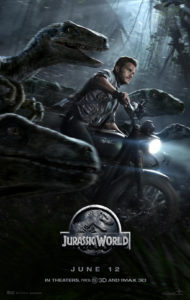 Jurassic World is the fourth installment of the Jurassic Park series, and it also serves as a revitalization of the entire series. Directed by Colin Trevorrow, people had a lot of hopes for this movie, since the original Jurassic Park is such a nostalgic film for so many people. It was made with a $150 million budget, and it starred Chris Pratt and Bryce Dallas Howard. B.D. Wong also returns as Dr. Henry Wu from the first movie. Development for Jurassic World began as early as 2004, and after a long time in development hell, pre-production began in around 2013. Brad Bird was originally set to direct, but he was too busy with his movie Tomorrowland. It made $81.9 million in North America on its opening day, which is the fifth largest opening day of all time. All in all, it made about $208 million in its opening weekend, which was quite the impressive showing. This film also helped to cement Chris Pratt’s reputation as a reliable and capable blockbuster leading man. 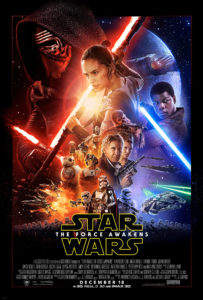 There have been quite a few franchise films on this list, and so I think it’s somewhat fitting that the highest ranking franchise film here belongs to one of the more influential franchises in all of science fiction. Star Wars: The Force Awakens was a highly anticipated film, serving as the seventh installment in the Star Wars series. There hadn’t been a Star Wars movie since the prequels, with Revenge of the Sith releasing in 2005. Star Wars fans were excited to reunite with the cast from the original series, and so they dutifully came out in droves upon its release. Star Wars: The Force Awakens made over $119 million on its opening day, shattering previous records. If you just look at earnings in North America, The Force Awakens is the highest grossing movie of all time. Its sequel, Star Wars: The Last Jedi, is arguably one of the most highly anticipated films of 2017. 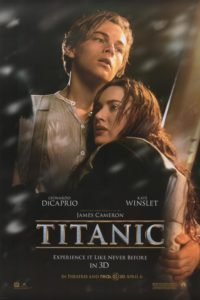 You may have noticed that many of these movies are newer films, with all of them having been released in the last decade. Titanic, which was released in 1997, breaks that pattern. This James Cameron film is one of the more iconic American movies of our time. Featuring Leonardo DiCaprio in one of his earlier roles, Titanic is a love story and a tragedy all at once, and it seemed to seriously resonate with audiences around the world. It was an unprecedented film at the time, and its $200 million budget was the largest ever. Titanic was nominated for fourteen Academy Awards, and it won Best Picture, Best Director, Best Cinematography, Best Original Song, Best Visual Effects, and Best Art Direction, among many others. The film made a modest $8 million during its opening day and its final opening weekend totaled to about $28 million. It passed the $2 billion milestone in 2012 when it re-released in 3D. 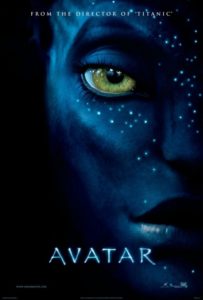 The two highest grossing Hollywood films of all time are both James Cameron movies. Avatar was also directed by James Cameron, and it released in 2009 to pretty wide critical success. It was seen as a technological marvel when it first released, and a lot of its appeal came from its revolutionary usage of stereoscopic filmmaking. It was also one of the first movies to be really, genuinely popular in 3D and IMAX 3D. The science fiction flick was nominated for nine Academy Awards, but it only ended up winning one. Avatar made $26 million on its opening day and around $77 million over its opening weekend. James Cameron has been working on a sequel to Avatar for quite some time now, and the original release date of 2018 has been pushed back more recently. Regardless, I’m sure that there are some people who are very excited to dive back into this colorful and exciting world.