Top 10 Most Popular Cat Movies of All Time

Cats have been adored by millions around the globe for hundreds of years. These balls of fur are irresistibly cute, are fun to watch when they bounce around, and make for excellent cuddle buddies. Now they have invaded the big screen, and these adorable purr machines have been portrayed in different kinds of movies ranging from animated flicks to comedies.

Read on and find out more about our top ten list of the most popular cat movies.

In this 2016 comedy flick, workaholic billionaire Tom Brand finds himself inside the body of a tomcat after a peculiar turn of events. In this new form, he learns how much he neglected his family due to his nose to grindstone attitude and he must make things right within seven days. Kevin Spacey plays the role of Brand and also provides the voice of the character’s feline form. Nine Lives gathered negative critical reaction, with Rolling Stone saying that the film will turn cat fanciers into kitty haters.

Virtually everyone knows who Grumpy Cat is. If you don’t then her real name is Tardar Sauce, and she looks ill-tempered because of her dwarfism. Her “facial expression” has led to the creation of viral memes which boosted her online popularity and led to her Internet stardom.  In 2014 her television Christmas flick Grump Cat’s Worst Christmas Ever was released where she was voiced by actress Aubrey Plaza. The film received mixed reviews, although a majority of these comments leaned on the negative side.

In 2007 street performer James Bowen met a wounded ginger cat in the hallway of the building where he lived. He helped the feline get treatment and, once the cat recovered, Bowen released it to the streets. However, the cat followed him everywhere he went, and Bowen eventually became attached to it and named it Bob. Bowen published a series of books about this fateful meeting and his other adventures with the cat, and in 2016 a film adaptation hit the big screen with Bob portraying his own furry self. The movie received mixed reviews, and earned almost $8 million which was the same production budget.

lidae is a crime fiction novel written by Akif Pirinçci and was published in 1989, and an animated adaptation was released in 1994. The film’s plot focuses on talking cats and the protagonist, an intelligent feline named Francis, finds himself stumbling upon a growing number of murdered kitties. Many scenes in this film are incredibly disturbing such as depictions of feline deaths, a cat suicide cult, and imagery of genocide. Felidae is a brutal movie with a good story that will surely satisfy horror fans. 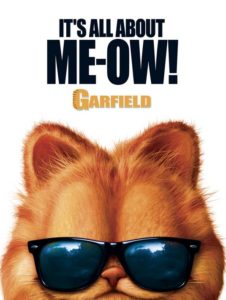 The famous comic strip created by Jim Davis has spawned many forms of media like cartoon shows and video games. Of course the big screen was not left untouched with Garfield: The Movie in 2004 and Garfield: A Tail of Two Kitties two years later. The two films feature Garfield as a CGI character, and Breckin Meyer and Jennifer Love Hewitt as Jon Arbuckle and Dr. Liz Wilson respectively.  Critics gave both movies lukewarm reception, and the sequel earned two nominations during the 2006 Golden Raspberry Awards.

Released in 2011, Puss in Boots focuses on the titular feline swashbuckler who first appeared on Shrek 2. The animated film shows the backstory of Puss in Boots and, typical to the Shrek franchise, includes many other fairytale characters into the mix like Jack & Jill and Humpty Dumpty. Puss in Boots was well-received by critics, was nominated at the 84th Academy Awards for Best Animated Feature, and earned around $554 million worldwide. It also spawned the Netflix series The Adventure of Puss in Boots in 2015, and a sequel titled Puss in Boots 2: Nine Lives & 40 Thieves was announced. 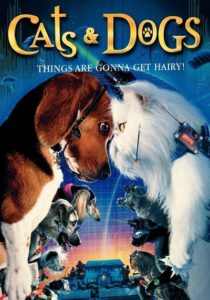 Cats and Dogs shows us the war between canines and felines as they engage each other with high-tech gadgetry, agents, and ninjas. The 2001 comedy was a commercial success with $200 million out of a $60 million budget, plus a “Best Family Feature Film – Comedy” nomination during the 2002 Young Artist Awards. The sequel Cats & Dogs: The Revenge of Kitty Galore was released in 2010 and raked in $112.5 million against the $85 million budget.

3. The Cat from Outer Space

The Cat from Outer Space deals with an extraterrestrial kitty named Zunar-J-5/9 Doric, or Jake, who makes an emergency landing in our planet. The government seizes his craft and Jake must find a way to get it back and fix it so he could go home to the stars. In his quest Jake is aided by a collar that grants him telepathic and telekinetic abilities, along with the help of a few human friends. The film was released in 1978, and was nominated for “Best Science Fiction Film” during the Saturn Awards in 1979.

The classic novel Oliver Twist has spawned numerous adaptations, and the Walt Disney Feature Animation musical Oliver & Company is what you get when you turn Oliver into a kitten and Fagin’s gang into street dogs. The film was released in 1996 and enjoyed success in the box office, although the reviews were unfavorable. Oliver & Company received nominations in the 1989 Young Artist Awards (Best Family Animation or Fantasy Motion Picture) 1989 Golden Globes (Best Original Song), and 1990 Grammy Awards (Best Recording for Children), and it won the Golden Reel Award for Best Sound Editing in 1989.

Just like Garfield, Fritz the Cat is the 1972 film adaptation of a well-known comic strip of the same name which was penned by Robert Crumb. However, unlike Garfield, this particular animated cat film was the first of its kind to be branded with an X rating due to its no-holds-barred controversial content. The film was a global hit despite having a limited release, with a good amount of positive reviews to boot. Its portrayal of violence and sexuality was an innovation that earned it spots in several lists of great animated films. Two years later a sequel titled The Nine Lives of Fritz the Cat was released, this time with an R rating (another first for an animated film), but was a failure both commercially and critically.

There we go with the top ten most popular cat movies. Have you watched any of these films? Do you have other movies to recommend? Please do share on the comments below.