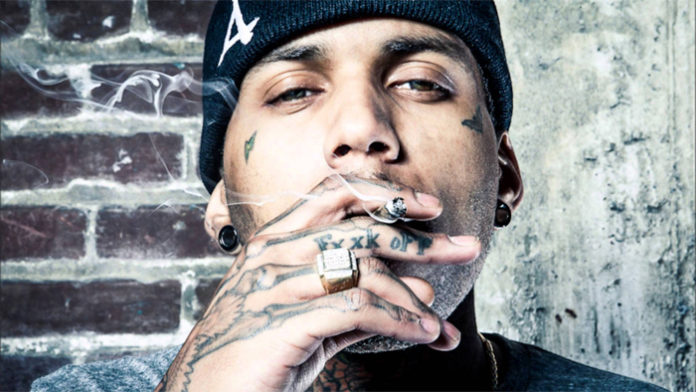 Brian Todd Collins- better known as Kid Ink, first made himself known as a rapper with his debut album, Up & Away in 2012. Extremely fond of music growing up, he started to pen his own beats and tracks in his early teens. Drawing inspiration from artists such as Swizz Beatz and Pharrel Williams, he was rapping full time by the time he was in his early twenties. In 2010, the Los Angeles-native dropped his first mix tape dubbed, World Tour. Responsible for breaking him into the hip hop scene, it ultimately led him to sign with The Alumni Group Label.

Since then, Kid Ink has showed the world what he’s capable of through several albums and records. As expected from one with such talent, his popularity has of course, also risen to new levels.

With all that he has going for him now, it’s estimated that he’s worth upwards of $50 million. Where did this huge amount come from? We’ll have to take a more detailed look at his career to answer this question.

How did Kid Ink Make His Money and Wealth? 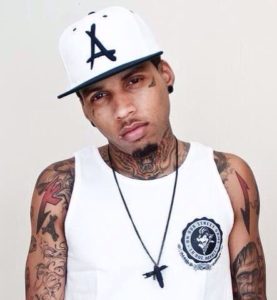 Born on April 1, 1986 in Los Angeles, California, Kid Ink (Birth Name: Brian Todd Collins) developed an interest in music- hip hop in particular, at an early age- like many artists. Having attended various after-school music programs as a teen, he eventually started to produce his own titles by the time he was sixteen. Uncovering his creative highway, he also produced several tracks for other musicians such as Nipsey Hu$$le, Sean Combs, and Sean Kingston.

By 2008, the then 22-year-old had turned rapping into his full-time career. Adopting the moniker, “Rockstar”, he released his debut mix tape entitled, World Tour in the winter of 2010. Ultimately, it was the popularity of that release that led him to be discovered by DJ III Will, who subsequently signed him onto his Tha Alumni Group Label, having recognized his potential as a rap star. Not long afterward, he decided to change his professional name to what it is today, Kid Ink.

Over the next year, Kid Ink released a number of mix tapes including Crash Landing (2010), Daydreamer (2011), and Wheels Up (2011), all of which enjoyed a positive reception.

On June 12, 2012, the Los Angeles-based rapper dropped his highly anticipated debut album, Up & Away through DJ III Will’s independent label. Kid Ink’s major breakthrough, it debuted on the Billboard Top 200 at number twenty and sold close to 20,000 copies within the first week- which was considered to be a relative success. Supported by six singles, it eventually also reached number three on the Top R&B Albums and the Top Rap Albums record charts; in Canada, it also found its way onto the Canadian Albums Chart. According to various online sources, the album is said to have earned him upward of $3 million- not too bad for his first studio album.

The following summer, Kid Ink released his major label debut EP, Almost Home on May 28, 2013. His first record with the RCA Label, with whom he’d signed with that January, it entered the Billboard Top 200 at number twenty seven and sold more than 20,000 copies in the first week in the United States. Another success for the artist, the EP- which was met with rave reviews, went on to chart at number five on the Top R&B Albums and at number four on the Top Rap Albums chart. Almost Home is approximated to have yielded the rapper earnings of close to $4 million.

On January 7, 2014, the American rapper came out with his second album, My Own Lane. His best-selling album to date, it entered the Billboard 200 record chart at number three, having sold over 50,000 copies domestically in the first week. By the end of the fourth week, it had sold an additional 78,000 copies. Kid Ink’s first album to bring him international fame, it also charted in Australia, Belgium, France, Switzerland, the UK, and Denmark. Within two years, it had gone gold after successfully selling more than 500,000 units. How much did My Own Lane earn him? Approximately $7.1 million.

The next January, Kid Ink dropped his third studio album, Full Speed which marked his second release with the RCA label. Although reviews were generally mixed, and it didn’t end up surpassing the success of its predecessor, it still sold 29,000 copies within the first week, having entered the Billboard 200 at number fourteen; it went on to sell an additional 50,000 copies by the end of the third week.

On December 25, 2015, Kid Ink released his next studio album entitled, Summer in the Winter. His newest album to date, it entered the Billboard Top 200 at number fifty shortly after its release; in the first week, it had sold approximately 16,000 units. Later reaching number ten on the Top R&B Albums chart, it also charted in several other countries including Denmark, Switzerland, the UK, and Canada.

Although he hasn’t dropped any full length albums since then, he has recorded and released a few singles including Nasty (Feat. Jeremih and Spice), Swish (Feat. 2 Chainz) and F With U (Feat. Ty Dolla Sign).

In addition to his solo works, Kid Ink has also collaborated with a number of other artists on various hit titles such as Delirious (Boneless) by Steve Aoki, Chris Lake and Tujamo and Worth It by Fifth Harmoney, the latter of which eventually went platinum three times in the United States.

Of course, his income is also supplemented by what he earns from the shows that he puts on on stage. Just looking at his current schedule, he has a couple of concerts planned for this upcoming summer in Las Vegas.

Needless to say from all that’s been mentioned above, Kid Ink earned most of his fortune from his success as a rapper. Still, a variety of other sources have helped to supplement his income. For instance, he made a brief appearance in the music TV programming, From Tha Bottom 2 Tha Top in 2016.

In 2015, Kid Ink also launched his own clothing line called The Alumni, which was made available via Apparel Zoo. The brand includes dozens of different items such as logo hats, pants, and shirts, all of which have been worn by the rapper himself in various public appearances and music videos.

On Youtube, there’s no doubt that his channel also brings him a decent amount of cash. Since he joined the site back in July 2010, Kid Ink’s page has received more than 80,000,000 views- surely, that has converted to a fair amount in terms of ad revenue. His most popular upload to date, the music video for That’s on You has been viewed well over 13,000,000 times!

Keeping that in mind, it’s not surprising to know that his net worth has also been increasing at an alarming rate. In 2012, Kid Ink was said to have a fortune of $28 million. By 2013, this amount had jumped by over $10 million to $40 million. Since then, it has gradually climbed up to what it is today- approximately $50 million.

No, Kid Ink is currently not married- however, he is engaged to his long-term girlfriend, fitness model Asiah Azante; the two became engaged in the summer of 2015. According to sources, he had popped the question while touring overseas- he later showed off the massive diamond ring on his social media account.

Does Kid Ink Have Any Children?

Yes, Kid Ink and Asiah Zante welcomed a daughter named Aislin Parvaneh Collins to the family in February of 2016.

Where Did Kid Ink Get His Name From?

Growing up, the rapper had always been fond of art; he eventually developed an interest for tattoos later in his life. His “addiction” to tattoos ultimately gave rise to his current stage name, Kid Ink. Currently, he has 27 tattoos on his torso, face, hands and torso.

Did Kid Ink Go to College?

No, the rapper did not go to college. After graduating from high school, he worked a number of odd jobs in and around the LA area prior to setting his eyes on becoming a rapper.

Where Does Kid Ink Live? Pictures of Kid Ink’s House

Having always kept his personal live private, Kid Ink’s present residence has never been revealed to fans. Having said that, it’s probably fair to assume that he lives fairly comfortably in Los Angeles with his fiancee and daughter with the amount of money that he has access to.

What Kind of Car Does Kid Ink Drive?

From our research, Kid Ink drives a white Aventador sports car which is valued at ~$150,000.

Since the beginning of his music journey, the hip hop recording artist has sold thousands of records across the globe- many of which have received RIAA accreditation. Some of said hit titles include Show Me (Feat. Chris Brown), Main Chick (Feat. Chris Brown), Body Language (Feat. Usher and Tinashe), and Be Real (Feat. Dej Loaf).

In 2014, Kid Ink’s collaboration with Chris Brown, Show Me, was nominated for an MTV Europe Music Award. Not long afterward in 2015, the same song earned him an ASCAP Rhythm and Soul Music Award for the category of Top Rap Song.

Earlier this year, Kid Ink released two titles- Swish (Feat. 2 Chainz) and F With U (Feat. Ty Dolla Sign). Since then, he has also dropped a new eight-track extended play called 7 Series– made available on iTunes earlier this month.