Skai Jackson Net Worth 2018- How Much Does She Really Make? 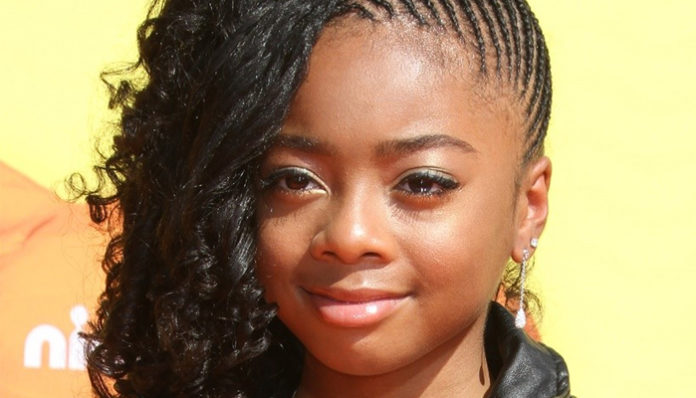 American actress Skai Jackson is perhaps best known for playing Zuri Ross in the Disney sitcom, Jessie (2002). Hailing from New York City, she started her career as a model when she was just nine months old. From there, she eventually took part in a number of commercials, prior to landing her first acting role in the television series, Liberty Kid (2007) – she was just five years old at the time.

After a number of small roles, Jackson made herself as a young, talented actress in the Disney series, Jessie in 2011. That same year, she also joined the cast of the children animated series, Bubble Guppies. With time, her popularity has only increased- as of 2017, the star has well over twenty credits to her name in the show business.

How much has she earned over the years from all of her television (and film) gigs? According to various sources, the fifteen year old currently has a net worth of $500,000. Where did most of this wealth come from? Let’s find out.

How did Skai Jackson Make Her Money & Wealth? 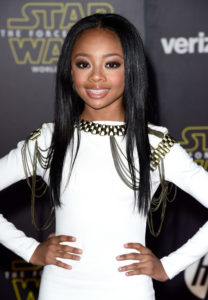 Born on April 8, 2002, Skai Jackson began her career as a child model when she was just nine months old- at the time, she appeared in a variety of nationwide commercials including one for Band-Aid. Aside from that, she also took part in a number of photo shoots as a child. Having said that, it wasn’t until she was five years old that she landed her first official acting role on television.

After a few years of modelling work, Jackson landed a small part in the film, Liberty Kid in 2007- as it happened, it also happened to be her first time appearing on the big screen. From there, the young actress eventually played a little girl in the romance comedy film, The Rebound in 2009. Ultimately, it wasn’t until 2010, that she broke into the TV world as an actress in the show, Royal Pains. That same year, Jackson also made her voice acting debut in the animated cartoon, Team Umizoomi (2010).

In 2011, she received a huge break after being cast as one of the main protagonists in the Disney sitcom, Jessie. Produced by Pamela Eells O’Connell, it centered around a young Texas girl who moves to New York in attempts to become an actress. In it, Jackson played the part of Zuri Ross- a strong willed young girl who has recently moved to New York City from Uganda; she eventually becomes good friends with Emma and Jessie (played by Peyton List and Debby Ryan respectively).

Hugely popular among young audiences, Jessie drew in over 4.6 million views during its premiere on September 30, 2011- making it the highest rated telecast on the network at the time. At the peak of its popularity during the finale of season two, the sitcom had garnered over 4.77 million viewers. Thanks to the show, Jackson quickly rose to fame in the show biz in the early 2010’s. Not only did her performance earn her praise from fans and critics, but it had more importantly- propelled her into stardom.

As one of Jessie‘s main protagonists, Jackson remained on the show for all four seasons- from 2011 to 2015; in total, she appeared in all 98 episodes. Seeing as to how popular the Disney sitcom was, the actress would have naturally banked a considerable amount from starring on the show (and for four years, nonetheless). Unfortunately for our curiosity’s sake, her salary from Disney has never been revealed to the public. For now, we can only assume that she was paid upwards of a few tens of thousands per season (which doesn’t seem too far off for a show of its caliber). Multiplying that by four (e.g. four seasons), it’s easy to see how she obtained the initial portions of her wealth.

That same year, the actress was also cast as a Little Fish in the children’s television series, Bubble Guppies. Revolving around a group of merperson preschoolers, it premiered in January 2011 on Nickelodeon, where it received a positive reception. One of the main characters of the first two seasons, Jackson ultimately remained in the cartoon for 39 episodes, prior to leaving the title in 2013.

Continuing on with voice acting, she eventually lent her voice to Isa the Iguana in the popular Nickelodeon cartoon, Dora the Explorer (2012). One of the longest running cartoons on the network, it had been running for over a decade, even before Jackson joined the cast. A recurring role, the actress appeared on and off throughout the show between 2012 and 2014.

In the fall of 2013, Jackson landed herself a lead role in the made for television film, The Watsons Go to Birmingham. As its title implies, it centered around The Watson family who sets off on a family road trip, during which they run into obstacles that eventually garner them newfound courage. Acting alongside actors Harrison Knight and Bryce Clyde Jenkins, the actress played the role of the family’s daughter, Joetta.

The following year, she made a small appearance in the Marvel animated series, Ultimate Spider-Man (2014), prior to landing her next break in the Disney sitcom, Bunk’d (2014). A Spinoff of Jessie– the same series that’s responsible for her rise to fame, the show centered around her character Zuri, as she heads off to summer camp at Moose Rump, Maine, with her best friends Ravi and Emma. In it, she is joined by her Jessie co-stars, Peyton List, and Karan Brar.

Premiered on July 31, 2015 on the Disney Channel, the pilot of Bunk’d attracted over 4.24 million viewers in the United States. Relatively successful, it had an average viewership of 1.76 million during the first season. Eventually renewed by the network for a second season, Jackson reprised her role as Zuri Ross in season two, which first aired on August 23, 2016; it eventually ended after 21 episodes on May 24, 2017.

Although television has always been her prime focus, Jackson has also appeared in a few Hollywood films- albeit in small roles, over the past years. In 2009, she played a little girl in the romantic comedy, The Rebound, after which she made a minor appearance in the comedy flick, Arthur (2011). That summer, she also voiced a girl in the popular computer animated film, The Smurfs (2011). Since then, she has also added the titles, G.I. Joe: Retaliation (2013), and My Dad’s a Soccer Mom (2014), to her growing resume.

On Instagram, Jackson is also considered to be a social media influencer with over 3 million followers. According to reports, she was originally asked to join the online community at the age of nine, to promote her first series, Jessie. Since then, her popularity has obviously exploded; on average, she receives anywhere from 70,000 to 150,000 likes on Instagram alone.

With that kind of engagement and audience, she most probably receives a fair share of endorsement deals from companies and brands. Did you know that some celebrities can easily earn upwards of a few grand (sometimes even more) for a product review or brand mention?

Currently, Skai Jackson is estimated to have a net worth of $500,000- and she’s only fifteen years old! From what we’ve said above, it can be assumed that she earned most of this wealth from the success of Disney’s Jessie and Bunk’d. If she decides to carry on with her acting career, it’s highly likely that she’ll climb even higher in the entertainment industry. For all we know, she may even decide to focus her efforts in Hollywood in the near future.

No, it’s a little too early for the teen to think of marriage- she’s barely just started high school. From what we can tell, Skai Jackson is currently still single. With her stunning looks however, she probably won’t stay that way for long!

Does Skai Jackson Have Any Children?

No, Skai Jackson does not have any children.

Did Skai Jackson Go to College?

No, the Disney star is currently still in high school. So far, it’s unknown whether or not she plans on pursuing higher education after graduating- fortunately for her however, she still has a few years left until she has to make that decision. Assuming that she continues with her busy acting schedule however, it may be difficult for her to make time for college.

Unfortunately, nothing has ever been revealed about where the young actress lives. Having said that, it can be presumed that she currently resides with her parents in New York City, where she’s attending high school.

We do not have any pictures of Skai Jackson’s house to share with readers at this time.

What Kind of Car Does Skai Jackson Drive?

At fifteen years old, the actress is still a little young to drive.

How Much Did Skai Jackson Make in Last Year?

Information on her 2016 salary is currently unavailable at this time.

At just fifteen years old, Skai Jackson has managed to successfully carve an identity for herself in the entertainment industry. Since she took on her first acting role in the independent film Liberty Kid (2007), she has appeared in a dozen television titles, the most prominent ones being that of Jessie (2011), and Bunk’d (2014). Last year, her portrayal in the former earned her a nomination for an NAAP Image Award for Outstanding Performance by a Youth.

A popular personality on social media, the actress has since garnered herself millions of followers online- on Instagram alone, she has over 3 million fans.

The actress’ latest acting project was that of Bunk’d, which had been running since 2015; after 42 episodes, it eventually came to an end in May 2017. Aside from that, Jackson hasn’t been involved with any other shows- we can only assume that she’s been taking the time to focus on school. Will she be returning to TV in a new series sometime soon? Only time can tell.