Conor McGregor Net Worth 2018 – How Rich is the MMA Star? 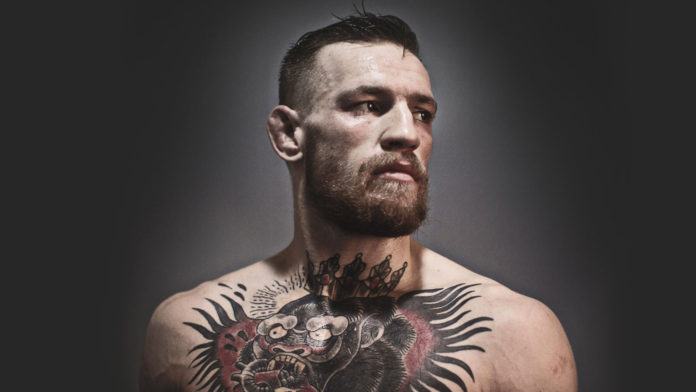 Conor McGregor is one of the most popular figures in modern MMA. Well known for both his striking ability and his smart mouth, Conor can talk trash with the best of them, and unlike some he has the skills to back up his words. Due to his massive popularity he is also one of the most well paid in the business. Still a young man, 29, he has amassed a $34 million fortune. This is set to get a fair bit larger by the end of August though, with the upcoming fight against Mayweather set to earn Conor a $75 million purse. Little of this takes into account the endorsement deals that Conor has. The profile of MMA has been raised through his combination of talent and personality, as an aside expect to see a resurgence of the bearded Irish fighter in film and television over the next few years.

So let’s take a look through his past, see where he makes his money and speculate as to where he is likely to go next.

How Did Conor McGregor Make His Money & Wealth?

Conor McGregor was born in Crumlin, Dublin, in the Republic of Ireland. His birthday is July 14th, so I missed it by a week in writing this now. He grew up speaking Irish and English, attending a Gaelscoil, essentially Elementary School  and a Gaelcholáiste, like a High School. It’s rare enough, seen as English is still the most common tongue in the South. He excelled at sports from a young age, playing soccer for a local club, before moving onto boxing at age 12. In many ways he is still a boxer, striking is his most dominant skill.

Before moving into MMA he was apprenticed to be a plumber, which is good work and pays well over here. He was convinced to try his hand at MMA by Tom Egan, who himself would go on to some success within the UFC. He made his MMA debut in 2007 as an amateur in the Irish Ring of Truth promotion, based in Dublin. His win there secured him a professional contract, but it would be a few years more before Conor would hit big. He considered dropping the sport in mid 2009, regardless of his successes in it.

His star began to rise after Dana White, head of the UFC promotion, took a trip to Dublin. He was accepting a Gold Medal of Honorary Patronage from trinity College, White is of Irish Descent, and while here he was inundated with requests from McGregor fans, petitioning him to sign Conor. Not long after he met with McGregor, and signed him. Since then he has gone from strength to strength within the organization.

Fighting within the UFC comes with a large number of benefits. The trainers, the after match care and the medical care are second to none in the industry, it has to be. In terms of take home, the fighters get a cut of the door, with increasingly smaller percentages the lower down on the card you are. I have been trying to find out whether UFC has the fighters as employees or as contractors, but I cannot find that out. The purse money won by each fighter for the match varies depending on the profile of the fighter and the venue of the fight, but seen as Conor is one of the hot names in the business right now, we can sat that he was taking home the upper percentile when he was fighter, putting a non title bout in a non PPV event still in excess of $100,000.

McGregor is highly sought after by companies for endorsement deals, as when you combine his popularity with his social media there is a huge built in audience for advertisers. His most recent, and most lucrative, deals were with Anheuser-Busch, the beer, and Beats by Dre, the headphone manufacturer. It is likely that there are more incidental deals going on as well. For the upcoming fight with Mayweather win or lose Conor McGregor is set to earn $75 million. No small amount overall. At 29 Conor still has a fair few years in the octagon ahead of him, if he wants to have them anyway. More recently he has taken a step back to look after his growing family. It will be interesting to see where he goes from here.

He is not. Conor has been in a committed relationship with his girlfriend Dee Devlin for nearly a decade though. The pair met in a nightclub in Dublin and have been together ever since. Devlin was a key component in Conor achieving the success in the ring that he has, as she supported him during his years training, long before he hit the big time.

Does Conor McGregor have any Children?

Conor McGregor has a son. Conor McGregor jr was born in May of this year, and it was the birth of this son that prompted Conor Snr to take a step back from fighting for a while. The fight with Mayweather being an exception.

Where is Conor McGregor from?

Conor is from Ireland. He grew up in and around Dublin, but currently lives in Kildare. Ireland has a long tradition of fighting in general, and boxing specifically. It’s the only sport we seem to get Olympic medals for.

Conor recently moved into a $2.3 million mansion in County Kildare, ROI. He posted a video tour of the place shortly after getting settled, and it looks lovely. You can see there in the exterior picture some of the cars he bought. Conor is a well known lover of fast cars. Glad to see he has the space to store them now.


All signs point to yes. Conor began training as a boxer for years before going for UFC, so it is not so far fetched. The fight is scheduled for August 26th. The issue from my perspective is not whether or not McGregor will give him a fight, the issue is Mayweather is one of the greatest defensive boxers in history. The hype surrounding the fight is huge, while the actual fight is likely to be a touch disappointing.