SJC Drums Update – What Happened After The Profit 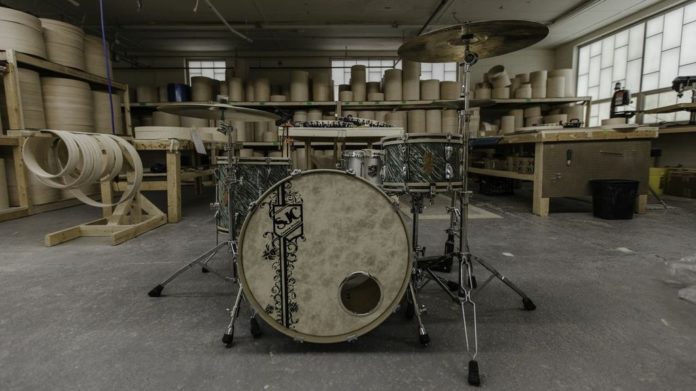 SJC Drums before The Profit

Starting in 2000 by a pair of teenaged brothers, SJC Drums has the definition of humble beginnings. First creating drums out of their grandparents basement, Mike and Scott J. Ciprari (hence SJC) worked together as craftsmen and artist to create some of the coolest drums for some of the coolest bands out there. Getting their big break with Panic! At The Disco, the duo expanded wildly with plenty of big names bands, and eventually even touring with a few to deal with maintenance and promotion. By the time Marcus Lemonis drops by, it appears that the pair have expanded their business a little past their own management abilities and family issues have arisen.

SJC Drums on The Profit

Marcus drops by Anaheim, California to attend a music conference where SJC presents some of their goods, far from their home state of Massachusetts. Upon greeting Mike, a custom drum set SJC presents catches his eye, and he inquires to the price, and when learning of the $6,000 price tag notices an immediate problem. Due to the high price, they are inhibiting many customers from trying out their drums. A second problem is that a turn around from order to delivery is 6 to 7 months due to lack of inventory.

Chris is then introduced to Marcus, a finance guy who also has an engineering background alongside an MBA degree. Marcus enquires as to if Chris has any equity for his skills, and is met with a weak “no”. With that information, he then asks Chris what sort of margins of profit the company is dealing with, which is another bad answer at give or take 15%. It’s clear that SJC’s drums are great, but the finances were off beat, big time.

The meaning of SJC is then brought up, and family issues are then revealed because Mike’s brother Scott was the founder and namesake of the company. Marcus is well aware that one cannot hire a new founder, or a new brother. After the conference, Marcus then travels to the Southbridge warehouse. Within minutes it’s made obvious there’s plenty of inefficiencies, and while Mike’s heart is in the right place (in trying to keep costs down) his efforts to manage high costs and low profits have, as Chris puts it, set the company into a death spiral.

In terms of organization, the materials seem to be a mess of cylinders. Boxes and piles of equipment are everywhere. Marcus then inspects the workflow and is impressed with the level of handmade precision. In speaking with the employees, it’s discovered there’s no real prioritization process, and workers are often confused. When discussing money, the team admit that the company is about as disorganized there, too.

There’s around $200,000 alone of products that need to be sent out to customers, with an additional $100,000 of debt due to work expenses. In the last year, $1 Million was made, with $200,000 lost despite 20% margins. When asked, Chris admits the margins should be about double that to make the company viable. Another major issue is Scott as Marcus notes that in buying him out, Mike put his brother ahead of himself in doing a $2,000 a month payment plan for 15 years with a $285,000 final payment. In Marcus’s words “that speaks a lot to (Mike’s) character”, which brings Mike to tears, obviously saddened by a deteriorating relationship. Even Chris offers support, saying that he wished Scott knew of Mike’s feelings. Marcus says that this needs to be fixed alongside the business.

Chris a few moments later has to step out due to rough emotions, and Marcus follows him out, being told it’s hard to believe in something and come close to not believing in a business anymore. Marcus says that they’ll find a way to blow this company out of the water in terms of success. He then comes back the next day, and states that working capital and debts are the concerns to be worked with. He then offers $400,000 for 33% of the business. This comes with the contingency that Chris would also be brought into the deal, and equal partnerships be made, with Marcus taking the reigns.

Early the next day, Marcus does a team huddle. First, he mentions the new partnership and that the products themselves are stellar. He then states though, that they are leaving out huge chunks of the market and aims to integrate them with a system he calls “good, better, best”. These will diversify the price points and who can afford them in the first place. Good will be around $895, costing the company $537 to make. The team is sent to make a plan for this base kit, which is clearly a challenge. Marcus sees a problem in terms of manufacturing, while the team was focused on components. Marcus then leaves to meet with Scott, who was the innovator, and ask him to return. Scott states that his issue with the company as he states he thinks there was a mutiny, and also the rush of drums production due to disorganization got to him. Marcus states Mike feels terrible about what happened, and Scott says he deserves it. Marcus still asks Scott to get involved with the company, and leaves with a plan of addressing the issues on Mike’s side of things.

Later, Marcus works with the employees to streamline the process to make a 10 steps to success process, including electronic and material organizers, much to the joy of the workers. He then meets Scott outside and brings him in. Marcus expresses doubt about working this relationship out. Mike and Scott both fall silent when they see each other, and clearly nerves get frayed. Mike then apologizes for what happened on both sides, and Scott pokes holes into the apology, causing escalation. Scott clearly is not as well controlled during the reconciliation. Marcus tries to work as a mediator and tables the personal issues for now, and focuses on drums.

Chris and Mike discuss the fallout of this, and Mike more or less states that this is too much pressure, and he may walk from the business. Marcus walks in, and the two discuss the issues, and Marcus pushes Chris to put the issues aside for the sake of the business. Chris then comes clean over the work culture and fully apologizes, stating he wants to be brothers again. Scott says he doesn’t want to deal with that now, and Mike says he understands but the offer is on the table. The next day, Scott drops by to help with the base model.

He makes a good deal of innovative solutions which is clearly going to save the business. They then test the base drums against Mike’s $6,000 kit. Needless to say, the base drums do extremely well. After this, the drums are made using the 10 step process which cuts down manufacturing time drastically. The team then takes their Better Drum set to Sam Ash to negotiate a deal. Initially, they are outright rejected. Then, Mike makes the play that he can leverage his personal relationships with artists like Green Day to sell the drums.

After the profit, there has been some improvements with SJC Drums. In terms of profitability, the business has not been better, with increased efficiencies and contracts with the likes of Sam Ash and the School of Rock. In terms of personal life, Scott has more or less been out of the business again, as the two’s egos and familial issues continued to be a problem after the show. It is mentioned that as of 2017, the family is on more solid ground and the business is set to continue to expand, especially with different drum products for different needs and price points. It could turn out to be that for SJC Drums, 2017 may be the most banging year yet.