James Rodriguez Net Worth 2018 – How Rich is He Really? 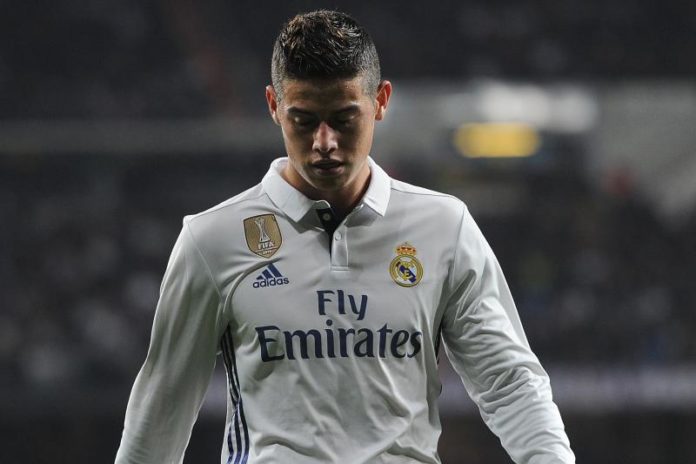 James Rodriguez, also just known as James, is a footballer with Real Madrid. He also plays as the captain of the Colombian national team. He’s a massively talented player, and there are a lot of people who would argue that James Rodriguez is one of the greatest players to come out of this era of footballers. Being a talented athlete can obviously be a very lucrative thing. How much has James been able to make during his career in sports? In this article, I intend to answer that question, among quite a few others. I’ll talk about how much James Rodriguez makes as a footballer, while also making sure to talk about how he was able to become such a successful athlete to begin with. Without further ado, let’s jump right into this.

How did James Rodriguez Make His Money & Wealth?

James Rodriguez was born in July of 1991 in Cúcata, Columbia. He spent a lot of his childhood in Ibagaué, Tolima. James officially began his career in football in 2006, when he entered Envigado, a Colombian second division club. He was able to reach the first division in 2007, when he was promoted. His time in Envigado was pretty successful, with 30 appearances and 9 goals. He was a solid contributor to his team. James eventually left Envigado and came aboard Banfield, the Argentine team. He played with Banfield up until 2010, and during his time there, his style of play drew comparison to football greats like Cristiano Ronaldo. Rodriguez’s career was still young, but he had already established a glowing reputation. People were very impressed by what they saw in him. He left Banfield in 2010 to move to Porto, where he was signed to a contract that was worth a good deal of money. 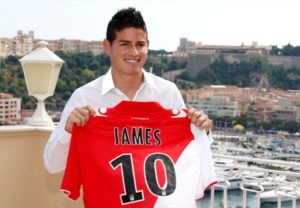 As it turns out, Porto got their money’s worth. Rodriguez played phenomenally with the club. During the 2011-2012 season he scored 14 goals and 11 assists, earning him the LPFP Award for Breakthrough Player. He also won the Portuguese Golden Ball Award for his play in that same season, which would make him the second Colombian to ever win it and the youngest person to ever win it. By the time James was done with Porto, he had scored 25 goals in 63 appearances, which is definitely not a feat to scoff at. He spent a brief period of time with Monaco, during the 2013-14 season. Rodriguez transferred to AS Monaco as one of the most expensive transfers in Portuguese football history, and he made his brief time with the club really count. In 34 appearances, he scored 11 goals. After Monaco, he made a move to the team that he still plays with today.

Like many footballers, James Rodriguez had always dreamed of playing for Real Madrid, one of the most prestigious football clubs in the entire world. In July of 2014, his dream finally came true. He signed a six year contract with Real Madrid, and it has been reported that the contract was worth as much as €80 million, which is obviously a ridiculous amount of money. If those reports were true, then this contract would make him one of the most expensive football players of all time. James debuted with Real Madrid during the 2014-15 season, and despite suffering an injury, he still put up a very good season. Rodriguez has been with Real Madrid since 2014, and he has scored 28 goals in 77 appearances. He is still with Real Madrid today, and I’m willing to bet that he’s going to continue to astonish fans and and rivals alike with his incredibly high level of play. 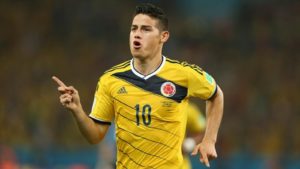 Outside of his club career, though, James has also made a real name for himself on the international level. He was playing internationally at a Youth level as early as 2007, which sort of allowed him to attract a lot of international attention and put him on the map so to speak. He was seen as someone with a lot of potential, and he was promoted to Colombia’s senior international team in 2011. Rodriguez played phenomenally at this level, just as well as he was able to play at a club level. He is still with the Colombian national team, even going so far as to serve as the captain of the team. In 20 55 appearances with the national team, he has scored 20 goals. It’s pretty astonishing to consider how much this guy has been able to accomplish when he has really only been in the spotlight for five or six years. Sometimes a footballer will work a lot longer than that without receiving the recognition they feel they deserve.

True, James Rodriguez is arguably one of the most gifted attacking midfielders/wingers in all of football right now, and he’s still really young. If his career continues on the path that it’s already been going on, who knows what kind of stuff he could accomplish? For reference, Cristiano Ronaldo is currently considered by a lot of people to be the greatest footballer alive, and he’s 32 years old. It’s mind-boggling to imagine how much better James Rodriguez could be by the time he reaches that age. Rodriguez is already renowned for his incredible versatility, technical skills, and vision, and all of those things will probably only improve as he acquires more club level and international level experience. Even if you’re not a fan of James Rodriguez, I think it’s safe to say that a lot of people are interested to see what this man will be able to become further down the line.

James Rodriguez is married to Daniela Ospina, who is a volleyball player. They have been married since 2011. Daniela is the sister of David Ospina, who plays with Rodriguez on the Colombian national team. Together, James and Daniela have a daughter named Salome, who was born in 2013.

James Rodriguez is without a doubt one of the most expensive players in football, so exactly how much does he make with the team? It has been revealed that, as a member of Real Madrid, James makes £120,000 per week. That means that he makes around £6.24 million per year. For reference, that’s around $8 million per year.

How much does James Rodriguez make per day?

If you use his salary above as a starting point, you can just use some really basic math to calculate the daily income of James Rodriguez. In a year consisting of 365 days, he makes around £17,100 per day. That comes out to about $22,100 per day.

James Rodriguez is widely considered one of the best footballers alive right now, so I don’t think it’s surprising to say that he’s accomplished a lot during his career, even though his career is still pretty short. With Real Madrid, he won the FIFA Club World Cup in 2014 and 2016. In those same years with Real Madrid, he also won the UEFA Super Cup. As far as individual honors go, the list is quite long. In 2014, he was named the FIFA World Cup Golden Boot. In 2014, he was named a Globe Revelation Player. In 2015, he was named a member of the UEFA Team of the Year.