Offset Net Worth 2018 – How Wealthy is the Migo’s Rapper Now? 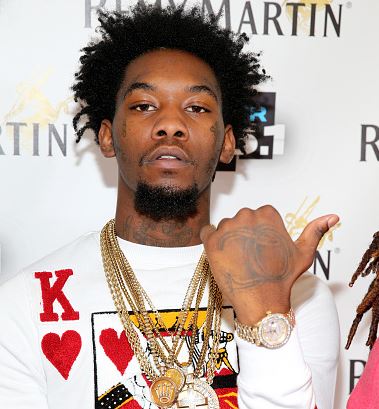 Kiari Cephus- better known as Offset, is best known for being a member of the hip hop trio, Migos. Hailing from Georgia, he grew up with his crew, Quavo (Quavious Marshall) and Takeoff (Kirshnik Khari), whom he is directed related to. Although the group was formed in 2009, it wasn’t until the release of their hit single, Versace in 2013, that they first came into the limelight.

Since then, Offset and his boys have released a number of records including two full length albums, an extended play, and a series of mix tapes- not to mention over a dozen singles. Some of their most popular songs include Bad and Boujee (Feat. Lil Uzi Vert), T-Shirt, Fight Night, and of course, Versace.

One of the country’s rising rap artists, Offset has also come out with several solo works. For instance he’s contributed to the tracks Life Line, Big Money, Large Bag, Headlock, and Extortion.

How much has he managed to bank from his various endeavours over the years? According to various sources, Offset currently has a net worth of $2 million, give or take some. Let’s take a look at his different sources of income.

How did Offset Make His Money & Wealth? 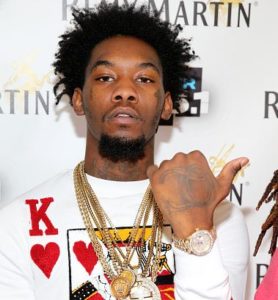 Born on December 14, 1991 in Lawrenceville, Georgia, Offset (Real name: Kiari Kendrell Cephus) grew up with his cousin, Quavo, and his nephew, Takeoff. Unfortunately, not much is known about their early life. Having said that, they did come together to form the hip hop crew, Migos in 2009 while they were in their late teens. From this, it can be assumed that all three were big fans of hip hop music.

After testing and playing around with their sound for a couple of years, the trio made their debut with the mixtape, Juug Season in August 2011. Released independently as a digital download, the project boasted nineteen titles including Money Going In, Locked in the Game, Ray Bans, Smell Me, and Train Rek. Even before it was released, its official trailer (posted onto Soundcloud) had garnered many views and likes.

The next year, Offset contributed to their second mixtape dubbed, No Label. Made available online on June 1, 2012, it contained the tracks U Didn’t Know, 2Pac & Biggie, Pull Out, Hit Juug, and Been Dropped a Sac, among others. Shortly after its release, one of its cuts- Bando became a regional hit; it was then that the group caught the attention of record producers Zaytoven and Coach K, aka the same manager who was responsible for launching the careers of rappers Young Jeezy and Gucci Mane.

Following a whirlwind of events, Migos dropped their next release, Y.R.N (Young Rich N*iggas) via Quality Control on June 13, 2013. The big break that they had been waiting for, the 18-track project included the songs Bakers Man, Jumping Out the Gym, Thank You God, R.I.P. Finesser, as well as features from RiFF RaFF, Gucci Mane, Trinidad James, and Que. Praised as the best mixtape of 2013 by Rolling Stone, the mixtape later peaked at number 74 on the Top R&B and Hip Hop Albums in the US, making it their first charting record. To date, it has amassed over 500,000 downloads online.

Not only did the mixtape perform incredibly well, but it also gave rise to their breakthrough hit, Versace. Released as a single on October 1, 2013, its popularity quickly soared through the roof after it was remixed by a number of popular artists including Justin Bieber, Adrien Broner, Johnny Polygon, Cap G, Why SL Know Plug, and Swagg Man. A huge commercial success, it reached number 99 on the Billboard Hot 100, number 23 on the Top Rap Songs Chart and number 31 on the US Hip Hop Songs Chart. Since its release, the official MV has received over 19 million views on Youtube and the single itself has garnered gold accreditation from the RIAA.

Over the next few months, Offset worked on two separate projects alongside his relatives and rapper, Rich The Kid- the mix tapes, Streets on Lock and Streets on Lock 2. Released through Quality Control and Rich Forever, some of the highlights include All I Do is Juug, Camera Flash (Feat. Soulja Boy), Quarter Million Dollars, On My Pradas, Fly With a Fish, My Momma (Feat. Yakki Diviosi), and Sean Kemp (Feat. Chill Will).

From their, the group’s next high-profile release came in the form of the mixtape, No Label 2, which was released on February 25, 2014. Produced by TM88, Metro Boomin, and Zaytoven, among others, it also featured appearances from artists Meek Mill, Rich Homie Quan, and Machine Gun Kelly. Named as one of the best albums of 2014 by Complex Magazine, it quickly became their most successful release to date, with spots on the Billboard Top 100, Top R&B and Hip Hop Songs, Top Rap Songs, and US Heatseekers Charts.

As with Y.R.N, the mixtape eventually spawned three singles, one of which included the hit, Fight Night, which went on to reach number 69 on the Billboard Top 100, number 17 on the Top R&B Songs Chart and number 14 on the Top Rap Songs Chart. Migo’s highest charting single at the time, it was lauded as one of the Best Tracks of 2014 by David Drake at Pitchfork Media. By the end of the year, the record had earned itself a BET Hip Hop Award nomination for Best Club Banger.

After a couple of collaborations with Gucci Mane and Rich the Kid (World War 3D: The Green Album and Streets on Lock 3 respectively), Offset and the boys dropped their next charting mixtape, Rich Ni**a Timeline on November 5, 2014. Featuring production by Cheese, Cassius Jay, Deko, DJ Durel, Murda Beatz, and Swift Bangs, it consisted of eighteen tracks including Story I Tell, Wishy Washy, What Y’all Doing, Take Her, and All Good. A few weeks after its release, it established itself at number 6 on the US Top Heatseekers Chart.

On July 31, 2015, the trio released their debut studio album entitled, Yung Rich Nation. A collection of trap and hip hop, it proved to be popular, selling more than 14,000 units within the first week. From there, it eventually peaked at number 17 on the Billboard Top 200, number 3 on the Top Rap Albums chart and number 5 on the Top R&B Albums Chart. In support of the album, the boys also headed off on the Run rich Nation Tour alongside OG Maco.

The following October, they dropped their hottest single to date, Bad and Boujee, which featured Lil Uzi Vert. A viral sensation on the internet, it not only topped the Billboard Top 100 but it was also spawning a huge amount of memes with the lyrics “rain drop, drop top” towards the end of 2016. The official music video, which features cameos from OG Maco and Travis Scott, has since received over 410 million views on Youtube. As of June 2017, the single has been certified four times platinum by the RIAA.

From there, the group’s popularity received another huge boost with the release of their second album, Culture. Easily their most successful project to date, it entered the US Billboard 200 at number one, with over 131,000 sales in the first week alone. Not long afterwards the album also managed to peak at number 1 on the Top R&B and Hip Hop Albums chart; in Canada, it also topped the Canadian Albums Chart with 2,000 first week sales. Aside from US and Canada, Culture also charted in France, the UK, New Zealand, Norway, Denmark, to name a few.

With the crew, Offset has also performed a number of concerts over the years. In fact, they’re currently on tour as we speak- looking at their schedule, the trio will be performing throughout the summer until October 17, 2017. In the past, Migos has also hit the stage in many other cities including Paris, France, Milan, Italy, and Luzern, Switzerland.

Aside from his endeavours with Migos, the Atlanta rapper has collaborated with several artists- some of said titles include Life Line, Big Money, Large Bag, Water Leak, No Complaints, Headlock, and Know Bout Me.

In 2016, Offset even made a guest appearance in the comedy drama, Atlanta, which starred Donald Glover, Brian Tyree Henry, Keith Stanfield, and Zazie Beetz.

From everything that was said above, it’s clear that most of Offset’s earnings came from his success with Migos- whether it be from their record sales, or concert shows. As of 2017, he is fortune is estimated to be around the $2 million mark.

No, the Atlanta rapper is not married- having said that, rumours has it that he’s recently hooked up with fellow artist, Cardi B. Just this February, the two were spotted sitting next together inside the NRG Stadium for the 2017 Super Bowl.

It’s unknown whether or not Offset has been in any other relationships in the past.

Does Offset Have Any Children?

Yes, the rapper has two children, a daughter and a son. Back in 2015, several media sources reported that Offset had gotten two women pregnant at the same time, an event that caused quite the stir.

Did Offset Go to College?

No, from what we can tell, the 25-year-old did not go to college.

Where Does Offset Live? Pictures of Offset’s House

Unfortunately for fans, Offset has not yet revealed any information about his pad. Going off by what we know about him however, it’s likely that he still resides in Atlanta.

What Kind of Car Does Offset Drive?

Despite being only in his twenties, Offset has successfully made a name for himself in the rap world, alongside his cousin, Quavo and nephew, Takeoff. Since they first came together for music in 2009, they’ve released a number of tapes and albums, many of which later reached multiple record charts. Currently, their top two records include the 4x platinum Bad and Boujee (Feat. Lil Uzi Vert), the platinum album, Culture.

With over 240K subscribers on Youtube, their work hasn’t gone without recognition- in fact just this year, Migos received two BET Awards for Best Group and Best Collaboration.

As far as solo endeavours go, Offset recently collaborated with Gucci Mane on the hit single, Met Gala. Taken from the album Drop Top Wop, it eventually reached number 88 on the Billboard Top 200 and number 37 on the Top R&B and Hip Hop Songs Chart.

With Migos, he’s also come out with the charting singles, T-Shirt and Slippery (Feat. Gucci Mane), in February and May 2017 respectively. This fall, the trio will also be releasing a third studio album entitled, Culture 2, which will be a direct follow up to Culture from earlier this year.