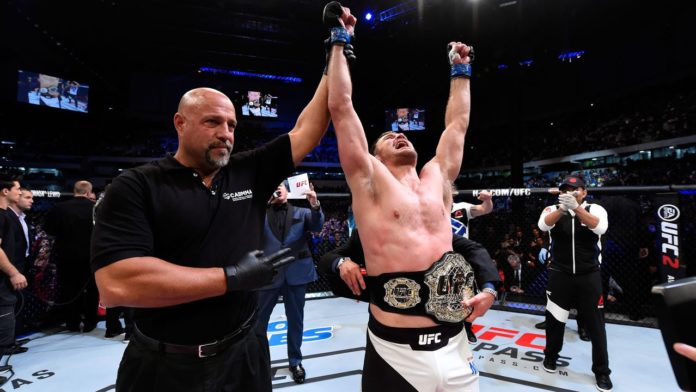 So many people watch sporting events and loudly tell everyone in the room, “Eh, I could do that!” but few have anything to say when the sport is mixed martial arts (MMA) and the athlete is the champion himself, Stipe Miocic. The Ultimate Fighting Championship (UFC) isn’t for the faint of heart but is the money really worth the effort and sheer physical prowess required to come out top dog? Stipe knows, looking down from the top of the dogpile, so let’s fight our way up and see if we can learn some of that magic that’s put him in the record books.

How Did Stipe Miocic Make His Money & Wealth? 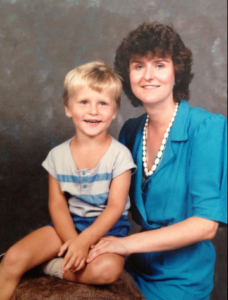 Born August 19, 1982 in Euclid, Ohio to Croatian parents, young Stipe started life by grabbing it by the horns and refusing to let go. He attended Eastlake North High School where he was on the baseball, football, and wrestling teams and excelled in all three sports, winning 8 total varsity letters. While in college (Cleveland State University and Trevecca Nazarene University) he attracted attention from Major League Baseball teams and their scouts but ultimately did not go into the MLB despite playing collegiate baseball. Being an amateur Cleveland Golden Gloves winner and NCAA Division I nationally-ranked wrestler during his time at Cleveland State, Stipe was a natural athlete and powerful fighter. MMA fighting requires the speed and skill of a boxer, core strength and endurance, and the flexibility of a wrestler, and was the perfect sport for this young bull to test his horns. Working as a bartender after college, in 2005 Stipe was helping a friend train for a fight and, in his own words, “never left the gym.”

Stipe burst onto the MMA scene, winning his first five fights by knockout, not an easy task for a rookie in the fighting world. Impressing crowds and turning critics, he then started fighting for NAAFS (Northern American Allied Fight Series), a MMA promotion based in Ohio and boasting a serious roster of all-in fighters and pro alumni, where he quickly became the NAAFS Heavyweight Champion. The wins were piling up and in 2011, Stipe signed with the UFC for a multi-fight deal, debuting against Joey Baltran at UFC 136 in October and winning by unanimous decision. For the next few years he was a staple for both UFC and UFC on Fuel TV events, racking up enough wins and scores to make him a bookie’s sweetest offering and earning him fans by the thousands.

Hard hitting, with several wins by technical knock-out (TKO), Stipe’s career was on a crash course with UFC Heavyweight Champion Fabricio Werdum and on May 14, 2016, they clashed at UFC 198. Stipe Miocic handily defeated Werdum to take championship title for himself, earning a Performance of the Night bonus and delivering Werdum his first defeat since 2011. He’s twice defended his title, against challenger Alistair Overeem in September, 2016 and most recently against challenger Junior dos Santos in May, 2017. Currently, Stipe is tied for the most consecutive UFC Heavyweight title defences in the history of the division. 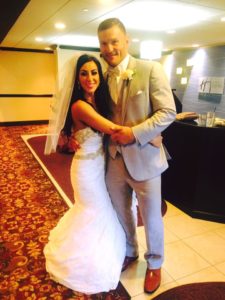 Stipe Miocic is married. On June 18, 2016, he married Ryan Marie Carney in Parma, Ohio. Ryan Marie, a registered nurse and beautician, had been with the fighter for several years, though Stipe didn’t make the relationship public until 2013, via Twitter. Some stars can’t wait to plaster every aspect of their lives and relationship all over social media but the two have have shown tact and restraint with Stipe tweeting before the wedding, “I’m gonna marry my best friend today. Hell yeah.” making him a gentleman gentle giant.

Did Stipe go to college?

Stipe attended two universities; Trevecca Nazarene and Cleveland State University, where he graduated with a degree in Communications/Marketing. College isn’t just about studying, though! While at CSU Stipe played 3rd base on the baseball team as well as the previously-mentioned NCAA Division I wrestling. This diversity in his college years resulted in the strength and agility needed for MMA fighting but also the marketing and brand savvy to promote himself in his early days. Social media impact is very important for any celeb but sports stars are also role-models for their younger fans and doubtless Stipe’s degree has helped him present a winning image to fans young and old.

Where does Stipe live? 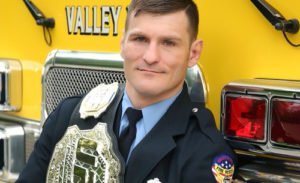 Stipe and his wife live in Independence, Ohio, where he works as a firefighter and paramedic. The talents that make him unstoppable in the ring serve him well when there’s an emergency. While it takes a lot of guts to get into fighting and to go up in front of the crowd time and again to fight, it takes bravery, will, and honour to commit the same to running into danger to save lives. He’s previous stated that he has no intention of quitting his work as a first responder, no matter what MMA heights he eventually climbs to.

Has Stipe won any awards?

What is Stipe’s total career earnings?

Only his winnings in the UFC are part of the official record, but to date, Stipe Miocic has racked up over $2,228,000 in prize purses, bonuses, and sponsorships.

What does Stipe do with his wealth? 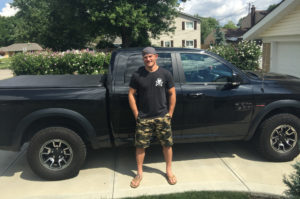 For someone with the UFC at his feet and a net worth of $2 million, Stipe and his wife live the simple life in Ohio. He drives 2016 black Dodge Ram Rebel truck that seems to be his pride and joy, as far as autos go, telling Motor Trend Magazine he rates it “a 10 out of 10.” On the lot while Ryan Marie was filling out a lease on her new car (an amazing Jeep Cherokee), a salesman introduced him to the Rebel and it was (automotive) love at first sight. Beyond fun cars to get them from here to there, there’s no shopping sprees on Stipe’s Instagram or wild, extravagant vacations. Studying marketing in college seems to have made quite an impact on the champion and it looks like he’s taking the sure bet and playing his financial cards close to his vest.

What’s next for UFC Heavyweight Champion Stipe Miocic? The sky certainly isn’t the limit for this popular fighter. With 108 thousand followers on Twitter and 265 thousand followers on Instagram he balances being a sports star and celeb with the rigorous training needed to keep defending his title (twice daily Monday through Friday and once on Saturday with conditioning and strength training in the morning and sparring in the evening). As MMA fighting becomes more and more popular, all eyes will be on the UFC and its reigning champion, Stipe Miocic.