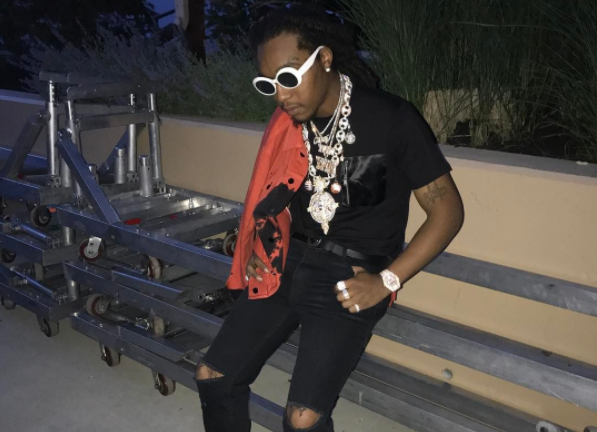 sKirshnik Ball- better known as Takeoff, rose to prominence as a part of Migos in the early 2010’s. Hailing from Georgia, he started to develop beats and rhythm at a young age, alongside Kiari Cephus “Offset” and Quavious Marshall “Quavo”, with whom he grew up with in Gwinnett County.

In 2009, the trio created a hip hop group under the name, “Migos”. They eventually launched their music career with the release of their first full length project, Juug Season in August 2011. Since then, Takeoff and the boys have dropped several other titles including the gold-certified hits, Versace, Fight Night, and T-Shirt, all of which remain to be some of their most popular tracks to date.

Currently, Migos is managed by Coach K, the same individual responsible for the success of fellow rappers, Young Jeezy and Gucci Mane. Seeing as how Takeoff is a member of one of the most prominent hip hop groups in Atlanta, it doesn’t come as a surprise that he’s earned himself a considerable fortune throughout the years.

According to certain sources, the 23-year-old artist currently has an estimated net worth of $1.5 million dollars. Where did most of this money come from? Let’s take a look.

How did Takeoff Make His Money & Wealth? 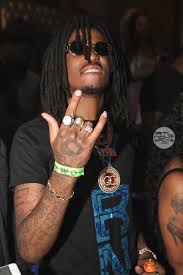 Born on June 18, 1994, in Georgia, Takeoff (Real Name: Kirshnik Ball) had always been drawn to music as a child. Growing up, he as raised alongside his uncle Quavo (Real Name: Quavious Marshall) and his cousin, Offset (Real Name: Kiari Kendrell Cephus). Ever since he was twelve years old, he had creating his own beats and rhythms- it didn’t take long for those around him to recognize his talent.

When he was fourteen years old, Quavo came up with the idea that the trio of them should form a hip hop group- seeing as how they were all fans of rap. Agreeing, they eventually adopted the name, “Polo Club”;  it wasn’t until later on that they changed it to what it is today, “Migos.” Going with the whole package, the three of them later came up with their individual nicknames, with him being “Takeoff”.

After performing a various venues in and around Georgia, they released their first full-length project, a mixtape entitled, Juug Season in August 2011; they subsequently dropped their second tape dubbed, No Label in June 2012. Ultimately however, it wasn’t until their third mixtape, Y.R.N. (Young Rich Niggas) that they began drawing attention from the hip hop crowd. Released through Quality Control, the project boasted eighteen tracks and featured appearances from Que, RiFF RaFF, Trinidad James, and Gucci Mane.

Reaching number 74 on the Top R&B and Hip Hop Albums chart, the tape later gave rise to their first breakthrough single, Versace, which was released in October 2013. Not long after its release, the song was covered by rapper Drake- this ultimately caused the track to go viral on the web. Before long, its official MV, directed by Gabriel Hart had received millions upon millions of views on Youtube. By November 2015, Versace had received gold certification after selling over 500,000 copies in the US.

Following their breakthrough success, Takeoff worked with Quavo and Offset for their next high profile release, the mixtape, No Label 2. Dropped in February 2014, it included the tracks Migo Dreams, YRH, and Body Parts, which featured Meek Hill, Rich Homie Quan, and Machine Gun Kelly respectively. Hailed as the perfect mix of party tunes, it charted among the Billboard Top 200, number 3 on the Top Heatseekers chart, number 17 on the US Rap Albums chart, and number 23 on the Top Hip Hop Albums chart.

Like their previous mixtape, No Label 2 gave rise to a few singles, including their second gold-certified record, Fight Night. Released on April 8, 2014, it became the group’ highest charting single after reaching number 69 on the Billboard Hot 100. Later on, the track also peaked at number 38 on the Billboard Rhythmic chart and number 17 on the Hot R&B Songs chart. Incredibly successful, its official music video has since been viewed over 21 million times on Youtube.

The following July, the trio delivered their first studio album entitled, Yung Rich Nation. Released through Atlantic, Entertainment Records, and Quality Control Music, it made over 14,000 first week sales- making it the 11th highest selling album in the US during that week. Chart performance wise, the 15-song project entered the Billboard Top 200 at number 17, and peaked as far as number 5 and number 3 on the Top R&B Albums and Top Rap Albums charts respectively

That same year, Migos released a few mixtapes: Migo Lingo (With YRN Lingo), Still on Lock (With Rich The Kid), and Back to the Bando; of the three, Back to the Bando ended up creating the greatest stir. Although it didn’t score on the record charts, it added fifteen new tracks to their catalogue including Neighbourhood Scientists, Asking for Money, Came From Nothing, Trap Problems, See What I’m Saying, Forrest Whitaker, and Look at My Dab– the last of which was eventually released as a single.

In January of this year, the hip hop trio dropped their biggest hit yet, Culture through Atlantic Records and 300 Entertainment. Originally announced in 2016, the album soon debuted at the top of the Billboard Top 200 shortly after its release, with approximately 131,000 sales in the first week. As if that wasn’t impressive enough, it also topped the Top Hip Hop Albums chart in the US and the Canadian Albums chart across the border. Outside of North America, Culture also charted in Norway, Sweden, Switzerland, France, Australia, Belgium, and Denmark, among other countries.

On top of being a successful release in itself, Culture eventually also spawned the 4x platinum single, Bad and Boujee. Featuring Philadelphia rapper Lil Uzi Vert, the song quickly topped the US Billboard Top 100, Top R&B Songs chart, and the Top Rap Songs chart. Outside of the US, it also charted in Australia, Canada, New Zealand, and the UK.

In addition to Bad and Boujee, their second studio album also produced their third gold certified single, T-Shirt. Released as a digital download on February 14, 2017, it became the second highest charting song of their music career, having reached among the top 20 in the Billboard Top 100. In the United States, it peaked at number 19 on the Billboard 100, number 11 on the Hot R&B Songs chart and number 20 on the Billboard Rhythmic chart.

Aside from their mix tapes, albums and singles, Migos has contributed to several songs including that of Young Nigga, We Ready, Irresistible (Remix), Thank Yo Momma, and Key to the Streets. Some of the artists that they’ve collaborated with in the past include R. Kelly, Juicy J, Project Pat, Sonny Digital, Tyga, and Fat Trel.

This May, Takeoff also made his debut as a solo recording artist with the single, Intruder. Produced by OG Parker, the song has since received over 1,000 hits on Soundcloud.

Considering the success of their releases, it’s clear that a significant portion of Takeoff’s wealth would have come directly from Migos’ record sales. No stranger to live concerts, he would also earned a considerable portion (alongside Offset and Quavo) from the countless performances that they’ve put on over the years. In 2016 alone, the trio hit dozens of different cities across the globe from Cleveland, Ohio to Amsterdam, Netherlands.

As far as other sources of income goes, Migos also has a popular Youtube channel which has since amassed over 2.2 million subscribers. Across their videos, they’ve garnered more than 980 million views. With these kind of numbers, it’s more than likely that the trio have monetized their content through Youtube’s partnership program. Assuming that they make at least $2 per 1,000 monetized views, that would work out to be earnings of at least $784,000.

On television and film, Takeoff and his cousins have appeared in the short film, Bando (2014) and in an episode of the comedy drama, Atlanta (2016).

To sum up, most if not all of Takeoff’s fortune is earned from his work with Migos- both from their record sales, public events and live concerts. Assuming that they will continue to put forth new material, it’s likely that his assets will continue to increase with time.

From what we can tell, Takeoff is not married, nor is he currently in a relationship. Nearly every time he’s spotted in public, he’s with his cousins Quavo and Offset.

Does Takeoff Have Any Children?

No, Takeoff does not have any children that we know of.

Did Takeoff Go to College?

The rapper’s educational background is unclear as he’s never talked about it openly before. Having said that, it’s assumed that he did not go to college.

Where Did Takeoff Get His Name From?

From what we know, Takeoff has never revealed the meaning behind his stage name, nor has his cousin, Offset.

Where Does Takeoff Live? Pictures of Takeoff’s House

Other than the fact that Takeoff is based in North Atlanta, Georgia, not much is known about his residence. Unfortunately, that also means that we do not have any pictures to share of his house.

What Kind of Car Does Takeoff Drive?

Information on Takeoff’s vehicle is unavailable at this time.

How Much Did Takeoff Earn Last Year?

We do not have any information on his 2016 salary.

With his cousins, Takeoff has dropped several hit tracks in the past years including Versace, Bad and Boujee (Feat. Lil Uzi Vert), T-Shirt, and Fight Night. Since their debut in 2009, they’ve released two full length albums, nineteen singles, twelve mix tapes and an extended play.

In March 2014, Takeoff and his cousins were involved in a shooting incident in Miami. According to reports, an unidentified individual had fired upon their van, from an adjacent vehicle. Fortunately, none of the band members were harmed in the accident.

This summer, Takeoff and his cousins will be continuing their worldwide tour- not only will they be hitting Canada, but they’ll also be performing in Belgium, Denmark, Finland, Germany, Netherland, and Australia.

As mentioned earlier, the rapper recently also dropped his first ever solo record, Intruder. The song, produced by OG Parker, can be streamed via his Soundcloud account.