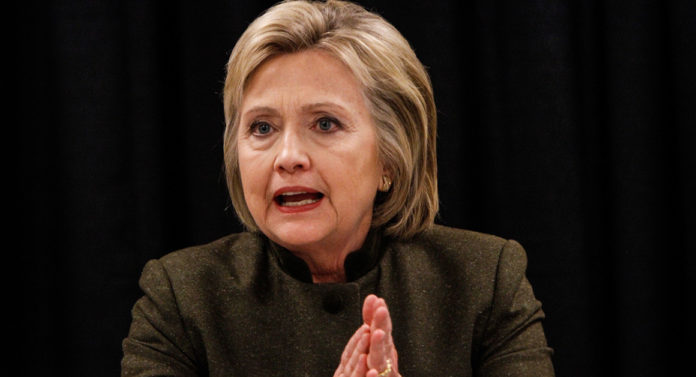 Last year, Hillary Clinton was probably one of the most talked-about people in the entire country. She was the Democratic nominee for the 2016 Presidential Election, and in the months leading up to the election, she was in the news for a lot of different reasons. Although she didn’t end up winning the 2016 Presidential Election, she is still probably one of the more well-known and relevant figures in politics right now, particularly in the Democratic Party. Hillary Clinton has millions of supporters across the country, and these supporters are known to express their kinship with Clinton through social media. They flock to numerous social platforms, including Snapchat, Twitter, Facebook, and Instagram. 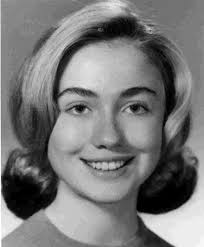 Hillary Clinton was born as Hillary Rodham in October of 1947 in Chicago, Illinois. She was an overachiever from a young age. Rodham was very good in class, and she was active in different extracurricular activities. She went to high school at Maine East High School, where she was an active member of the student council and a contributor to the school newspaper. During her senior year, she was voted most likely to succeed by her peers. Hillary was interested in politics when she was very young. Rodham obviously participated in things like student council, but her desire to create change in the world around her branched out much further than just that. She grew up in a largely conservative household, and so early on, she volunteered for Republican politicians. (During the election of 1964, she supported Republican candidate Barry Goldwater.) Heading into 1965, Hillary was still a Republican when she began to attend Wellesley College.

Hillary was a political science major with Wellesley College, and she continued to support Republican candidates in various local and larger elections. During the 1960’s, there was a lot of political upheaval. While a lot of people Rodham’s age were trying to take action against the government, Rodham was more inclined to create change in a more constructive manner. During her junior year, despite her conservative tendencies, she became an avid supporter of Eugence MCCarthy’s antiwar presidential nomination campaign. Although Hillary entered Wellesley College as a ride or die Republican, her time at the college caused her to slowly inch over to the Democratic side of things. She would go on to graduate the school with a bachelor of arts in political science, and following this graduation she would go to Yale Law School. 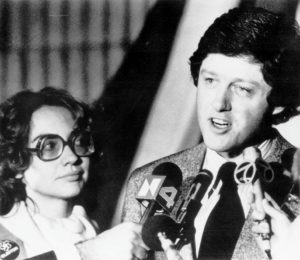 Around this time, Hillary began to date Bill Clinton. They were both law students at Yale, and they became very close over time. When Hillary graduated from Yale in 1973 with her Juris Doctor, Clinton proposed to her, but she declined his proposal. Although Hillary loved Bill very much, she was reluctant to permanently tie her life to his. Now that Hillary was completely done with school, she began to assert herself in law and in politics. For a time, she was the staff attorney for the Children’s Defense Fund in Massachusetts. She followed Bill wherever he went as he continued to pursue a career in politics, and all the while she sought out her own opportunities. In 1974, she moved to Arkansas (where Bill was running for a seat in the U.S. House of Representatives) and became a faculty member with University of Arkansas, Fayetteville’s School of Law. Around this time, Hillary also became the direction of a legal aid clinic that was run by the university. In 1975, just a year after moving to Arkansas, Hillary finally agreed to marry Bill Clinton. She may not have known this at the time, but this decision would majorly alter the course of the remainder of her political career. 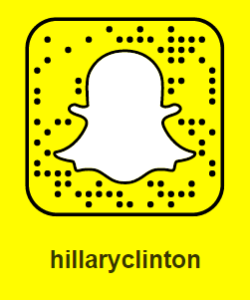 It took her a while to jump on the bandwagon, but Hillary Clinton did in fact end up creating a Snapchat account during the summer of 2015. If you want to add this politician on Snapchat, you can find her just by searching for the username ‘hillaryclinton’. You also have the option of scanning her Snapcode using the Snapchat app. (The image you see above is Hillary Clinton’s Snapcode.) If neither of those work for you, then you can also just click the link right here to add Hillary Clinton on Snapchat.

Hillary Clinton, like a lot of other politicians, has an official, verified Facebook page. She uses the page to share things that she thinks is important, and also as a way to keep her supporters in the loop in terms of what she’s been up to. You can find her Facebook account by searching for her username, which is @hillaryclinton. You can also just click the link here.

Hillary Clinton has a massive following on Twitter. As I write this, she sits at over 17 million followers. This is definitely impressive, especially when you consider that she only made her Twitter account in April of 2013. You can find her under the username @HillaryClinton. Take a look at the kind of stuff she shares with her followers by clicking the link here.

You know, Instagram may not be the first social platform that you think of when you think of Hillary Clinton. However, Clinton really does use every tool at her disposal to ensure that she gets her message out to the masses. You can find her on Instagram under hillaryclinton. Check out her account by clicking the direct link right here.

There are a lot of people out there who use Kik. It’s a very popular messaging app, and it’s especially popular among younger people. However, it isn’t all that popular among politicians, and Hillary Clinton is no exception. Kik is a little too casual for someone like Hillary Clinton to use it. If you meet someone on Kik who claims to be Hillary Clinton, you’re probably talking with a very ambitious impersonator.