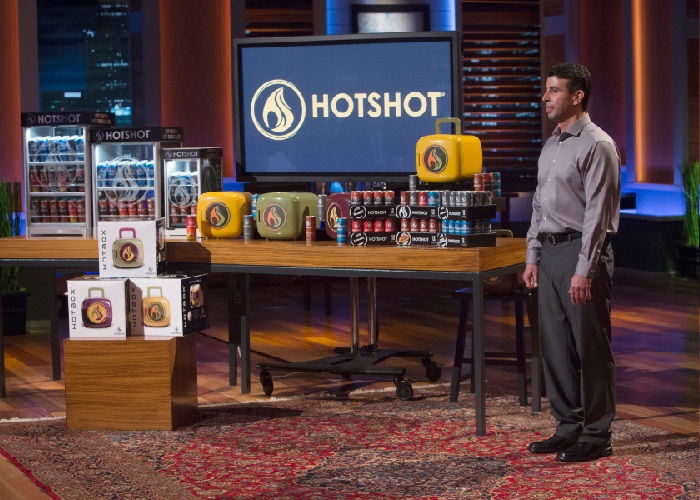 Danny Grossfeld was visiting Tokyo, Japan on a business trip in 2008 when he found himself in desperate need of a cup of coffee, at five o clock in the morning. The New York native went to a series of stores in an attempt to get his caffeine fix, but found to his surprise that none of them appeared to have any hot coffee available. Eventually he gave up on the idea, and went to a cooler in the back of a store to buy a soda, but he was pleasantly surprised that what he had thought was a cooler was in fact the exact opposite, it was a heated unit for ready to drink coffee cans.

Danny had discovered the Japanese market for hot beverages in a can, and he liked the idea so much that when he returned to the United States he began to research the size of the potential market. He soon discovered that the canned coffee business was a multi-billion dollar market in Japan, which trails only behind America and Germany in terms of average coffee consumption.

The entrepreneur began experimenting with his own version of the drink, and a convenient way to heat the product up. After thousands of tweaks to his formula, he eventually perfected the recipe, and also devised the Hotbox, a heating unit that could keep the drinks permanently heated, to 140 degrees, for as long as three months.

Danny managed to fund the production process and expensive molds with his own cash, alongside additional funding he sought out from family and friends. He eventually sunk over two million dollars into his dream, and in early 2015 things seemed to be progressing well, as a test run of 1,000 cans had met with a very positive reaction from testers. Danny pushed ahead with a production run of 4,000 hotbox units, and turned to the crowd-funding site Kickstarter to finance the operation.

The Hotshot business was featured in the Los Angeles Times and Danny had an opportunity to promote his Kickstarter campaign, but unfortunately not many others shared his vision, and the campaign, which had a target of $80,000, eventually raised less than $10,000. But the LA times article also had another, more positive side effect. Producers from Shark Tank contacted Danny because they liked his passion and drive, as well as the tenacity he had shown throughout years of product development, they invited him to appear on the show and he eventually entered the tank in October 2015.

Danny came to the tank hoping a gain an investment of $300,000, in exchange for 10% of his company. He launched into his pitch by telling the sharks that he had developed the ultimate convenience in hot coffee, perfect for busy coffee-lovers who were always busy in the mornings. With Hotshot they could just grab a hot drink from a hotbox, and never have to make a cup, or stand in line ever again. Hotshot was the first ‘Grab and go, ready to drink in a can coffee product available in America’, and he asked which of them was willing to join the coffee revolution, and become a Hotshot themselves.

‘Gotta try it’ said Robert Herjavec, and Danny was ready with some samples. He handed out drinks to the sharks and Lori Greiner remarked how warm the can was. Mark Cuban was quick to point out that 140 degrees was usually considered quite warm, and Danny took the opportunity to mention the insulated label that absorbed 50% of the heat, leaving the cup still quite comfortably warm, rather than too hot to hold.

The Sharks liked the coffee, several on them remarked on the pleasant taste and Danny revealed that he had changed the recipe over 1,500 times during six years of development, in order to get a product that tasted great, yet could be heated continually for up to three months.

Robert Herjavec asked Danny where the idea had come from. Danny explained about his trip to Japan, and his discovery of canned coffee over there. Robert asked what sales he had achieved so far, and Danny announced that the product had taken six years, and $2 million dollars ‘in the making’.

Chris Sacca was confused, he asked Danny if he had sold $2 million worth of products, but that was not the case at all. Danny admitted that he had invested $2 million in total to develop the product over six years, but he hadn’t actually sold anything so far.

Kevin O’Leary tapped his fingers, looking happy. But he didn’t strike just yet. Chris Sacca was still uncertain why Danny was in the tank, ‘I’m not sure if you’re pitching, or asking for therapy’ he remarked, but his expression suggested that therapy was the more likely option.

Kevin revealed his belief that all business practices were rooted in Greek philosophy. ‘Oh No’ remarked Lori, knowing that when Kevin starts talking about philosophy it never ends up well for a shark tank applicant. Mark Cuban dissolved into laughter.

Kevin shared the Myth of Sisyphus, an ancient king who was forced to spend eternity pushing a huge boulder up a mountain, only to find it rolled back to the bottom whenever he finally reached the summit. Kevin told Danny that he was the cursed man, forced to push the Hotshot business up a mountain, but he had never achieved any sales, and he was forced to repeat his futile efforts when they inevitably failed.

Danny defended himself, pointing out that he was launching the business now, after years of perfecting his product. Robert inquired what the $2 million previously invested in the business had been spent on. Danny explained that he had finally developed a product that would taste great, even after several months of being continuously heated, and that development process had cost a million dollars alone. He told the sharks that the market was worth $15 billion in Japan, and it was the third largest beverage sector in the World, yet nobody in America was providing similar products.

Robert asked if Danny had managed to get any convenience stores stocking his products yet. Danny admitted that although he had received ‘lots of interest’ in the Hotshot business, from a variety of stores, he had failed to close any deals with retailers to date, but he asserted that with a sharks help in meeting retailers his product would virtually sell itself.

Kevin O’Leary wasn’t going to be joining Danny. He told the entrepreneur that after six years, with no sales at all, he should consider doing something else. Kevin believed that if a company didn’t show any kind of profit after a period of thirty-six months, then it was a hobby, not a business, and it was time to ‘take it into the barn and shoot it’. And with that Kevin was out.

Robert Herjavec was unimpressed with the concept of the Hotshot business too, but he also had an observation about the difference in American and Asian markets. He believed that American consumers had a far greater selection of coffee outlets to choose from, and a shift to hot coffee in cans would be far harder to achieve in a market that was already highly competitive. Robert wished Danny luck for the future, but he was out too.

Chris Sacca revealed that he had previously invested in the high-end coffee retailer Blue Bottle Coffee, which raised $70 million from several big name tech investors during a funding round in 2014. He believed that the Hotshot business would be competing for the same market space as Blue Bottle, and due to that he was also dropping out.

Mark Cuban had good and bad news for Danny. The Texan shark announced he hated the business, but liked the idea, and he liked Danny too. Although he was not going to be investing in the Hotshot business, he told Danny that once the business was actively shipping out orders, he would be prepared to give Hotshot coffee a trial in one of his Landmark theaters. ‘How about the stadium too?’ suggested Danny, but Mark looked less enthusiastic about that idea. ‘That rock is going to come down and squash you’ he cautioned, but he was smiling at Danny’s endless enthusiasm.

‘Well you’ve got a customer’ said Robert, and Danny did look pleased, but he turned his attention to Lori Greiner, the last shark remaining and his last chance of a deal in the tank.

Unfortunately Lori wasn’t going to give the entrepreneur a last-minute lifeline. She told Danny that after so much money being invested in the product, and a complete lack of any corresponding return on the investment, she had a gut feeling that the business was never going to work. She believed that in this case there really needed to be a sixth person rejecting the business, and that was Danny himself. She told him that the Hotshot company was, in her opinion, doomed to failure, and she suggested that Danny should leave it behind too, and ‘Stop the bleeding’.

‘I can’t stop now, I’m going to launch this fall’ said Danny, and he was smiling, but the impact of Lori’s speech had dampened his sunny disposition just a little.

Hotshot Now in 2022 – The After Shark Tank Update

Several movie theaters and convenience stores agreed to test out their products after the episode aired. Not only that, but they also signed a distribution deal with SKI Beverage, who agreed to distribute their coffee throughout the New York area.

They also offered a starter kit (hotbox with 12 cans) for $79.99 plus $4.95 flat rate shipping on their official website. Monthly subscriptions (hotbox with 24 cans) were also available for $99.99 (then $47.98 per month). As of July 2022, however, they no longer have any products listed on their site. You can still see the various options that used to be available but you’ll get an error if you try to proceed with the order.

As for their retail partners, it’s currently unknown whether or not their products are still available in stores, but our guess is no. Their ‘store locator’ feature still lists several shops across the United States (including one in Alaska) but for all we know, it might just be outdated.

That’s not all, they’ve also pulled their products from Amazon (their latest reviews are from 2019). Prior to that, they had offered five different flavors: Hot Chocolate, French Vanilla, Espresso, Caramel, and Black.

Their social media accounts also appear to be abandoned. Their Twitter account (@hotshotdrinks) hasn’t been updated since 2019 and the same goes for their Instagram account (@hotshotcoffee). If anything, their website is the only thing that’s still ‘up and running’, which is interesting, seeing as how they usually go offline once a company shuts down.

In any case, given everything that we’ve seen, it’s probably fair to say that the company is no longer active. Seeing as how Danny is a serial entrepreneur, he might very well have gotten himself involved with another endeavor. Perhaps we’ll see him with another company sometime in the future.