There are a lot of people who may be surprised that Dwyane Wade is still playing basketball. He has been in the NBA since 2003, and he hasn’t really shown any signs of stopping. Dwyane is perhaps one of the most gifted shooting guards that the NBA has ever seen, and over the course of his long and storied career, he has found himself with a ton of different fans. He remained with the Miami Heat for a very long time, and he helped that team become one of the most popular in the NBA. Wade’s fans are known to come out in droves to support him on social media, especially on platforms like Instagram, Snapchat, Twitter, and Facebook. Wade is sometimes known to go on those platforms and interact right back with his fans, too.

Dwyane Wade was born in January of 1982 in Chicago, Illinois. He had a very difficult upbringing, and he often found himself surrounded by things like drugs and gang violence. Because of all of these things, Wade resorted to sports to distract himself from it all. His favorite sports were football and basketball. He attended Harold L. Richards High School, where he played as a wide receiver for the football team and as a shooting guard for the basketball team. As someone who had grown up in Chicago, Dwyane grew up as a huge fan of the Chicago Bulls and of Michael Jordan. Although Wade had an excellent high school career, due to academic issues, he was only recruited by Maruqette University, DePaul University, and Illinois State. 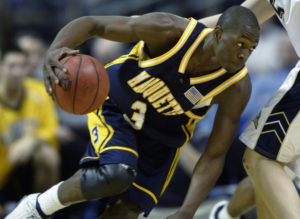 In the end, Dwyane Wade ended up playing for Marquette University. Although he was ineligible to play during his freshman year due to academic problems, once he got onto the court, he made a huge impression with Marquette. He had excellent individual stats, and he was also able to help the team go on to big things. During the 2002-03 season, Wade helped lead Marquette to their first Conference USA championship. Needless to say, he was proving himself indispensable. He decided to forgo the remainder of his time with Marquette to enter the 2003 NBA Draft, where he was selected with the 5th overall pick by the Miami Heat. Right off the bat, Dwyane became a very important part of the Heat. He came into the NBA at the same time as Carmelo Anthony and LeBron James, so he was overshadowed a bit, but the NBA was still very impressed by him.

Fast forward to the present, and Dwyane Wade is one of the most prolific players in the NBA. He has been an NBA champion three times: in 2006, 2012, and 2013. In 2006, he was actually selected as the NBA Finals MVP. He has been named an NBA All-Star 12 times, between 2005 and 2016. Wade had a very good relationship with the Miami Heat for a very long time, but in the summer of 2016, he announced that he was going to be playing with the Chicago Bulls. He felt as if he was unappreciated by the president of the Miami Heat, Pat Riley. Despite a couple of unfortunate injuries, Wade has made his presence very known on the Bulls, and he has proven that his prior success wasn’t just tied to Miami. Although fans of Wade may have been disappointed by this move, at the very least we still have the privilege of being able to watch this basketball great in action. 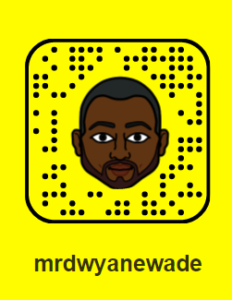 Dwyane Wade is on Snapchat, and he’s known to actually use it pretty often! (Sometimes, a celebrity or athlete will create a Snapchat for the purpose of promoting something, and they won’t use it much after that.) Wade’s official Snapchat username is mrdwyanewade, and you can add him just by clicking the link right here. You can also just try to scan his Snapcode, which I’ve included a picture of above. If you use the Snapchat app, you can just scan the Snapcode and add Dwyane Wade instantly.

Dwyane Wade and Facebook have both been around for a very long time, so I suppose it comes to no surprise that he has an official, verified page on Facebook. His page has over 11 million likes, which is really impressive. You can find Wade on Facebook as @dwyanewade, or you could just go ahead and click the link here.

Dwyane Wade is on Twitter! He has been on Twitter since early 2009, and he has gotten over 7 million followers since then. Wade uses Twitter pretty often, and he talks with his fans on there quite a lot. You can find Dwyane on Twitter as @DwyaneWade. If you want, you can also just click the link here, which should lead you straight to his page.

Dwyane Wade has been on Instagram for a good while. This isn’t really unusual, since Instagram is a very popular social network among professional athletes. You can find Wade on Instagram through his username, which is simply @DwyaneWade. Of course, you’re free to check out what kind of stuff he shares with his followers by clicking the link here.

Kik is a super popular messaging app, and it’s actually used by quite a lot of athletes. If you want to add Dwyane Wade on Kik, though, I have some bad news for you. Although it’s fully possibly that Wade has a Kik account that he uses personally, it doesn’t seem like he has a public account.