T-Pain Snapchat Name- What is His Username and Snapcode? 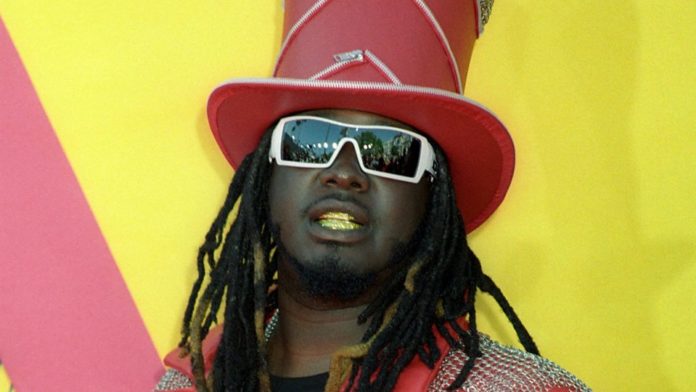 From the mid to late 2000’s, T-Pain was able to rapidly become one of the more well-known hip-hop artists out there. He has been featured in countless popular songs over the years, and in many ways, he’s become a brand. T-Pain popularized auto-tone pitch correction, giving his “voice” a distinctive sound that people have gone on to replicate with his official app and merch. This artist has been able to accumulate millions of fans over the years, and these fans are known to support him across many social networks, including Snapchat, Facebook, Instagram, Twitter, and more. Sometimes, T-Pain will even use his social media accounts to interact with his fans.

T-Pain, also known as Faheem Rashad Najm, was born in September of 1985 in Tallahassee, Florida. Najm was first exposed to music by Ben Tankard, who was a friend of the family at the time. (Tankard is best known for his work in gospel jazz.) A young Faheem spent some time in the recording studio with Tankard, which inspired to convert his bedroom into a recording studio several years later. Like a lot of young, aspiring hip-hop artists, T-Pain started out by joining a rap group. The group was called Nappy Headz, and he originally joined in 2004. With Nappy Headz, Faheem recorded “I’m Fucked Up”, which was a cover version of “Locked Up”, the Akon single. The cover ended up falling into Akon’s hands, who went on to sign T-Pain to his record label. 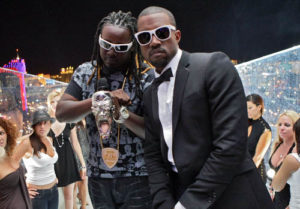 Just a year later, T-Pain recorded and released his debut album, entitled Rappa Ternt Sanga. Two singles off of this album, “I’m Sprung” and “I’m N Luv (Wit a Stripper)” charted pretty well. T-Pain kept his momentum going in 2006, and in 2007 he released the album Epiphany, which was a smash success. It ended up topping the Billboard 200 chart, and two singles to come from it, “Buy U a Drank (Shawty Snappin’)” and “Bartender”, were successful, as well. While T-Pain promoted this album, he made guest appearances on songs by other artists. These collaborations would increase his brand recognition, and they did a lot to make him a more popular musician overall. He worked with many artists, including Kanye West, Chris Brown, DJ Khaled, T.I., and Bow Wow. His single with Kanye West, “Good Life”, would win a Grammy Award for Best Rap Song in 2008.

I think it’s safe to say that, by this point, T-Pain had become a credible and popular name in hip-hop. In 2008, he released the album Thr33 Ringz. It wasn’t quite as popular as his previous album, but it was still a solid release. Thr33 Ringz ended up being nominated for a Grammy Award for Best Contemporary R&B Album. More recently, T-Pain is still making music. He has been working on his fifth studio album Stoicville for some time now. T-Pain released the album’s lead single, “Dan Bilzerian” featuring Lil Yachty, in October of 2016. This album has been plagued by delays throughout its development, but I highly doubt that T-Pain is going to cancel its release altogether. With that said, though, he has spent a lot of time recently collaborating with artists like Lil Wayne and Bruno Mars, both as a featured artist and as a producer. 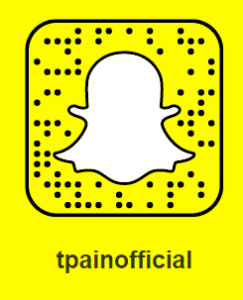 T-Pain first joined Snapchat a couple of years ago, and he has been a big part of the social platform ever since then. If you’re a fan of him, then I think it would be a really good idea to add T-Pain on Snapchat. You can do this, first of all, by scanning his Snapcode. I have included an image of his Snapcode above for your convenience. If that doesn’t work for you, then you can try to just search for T-Pain through his Snapchat username, which is tpainofficial. As a last resort, you should also be able to just click the direct link right here to quickly and easily add him on Snapchat.

If you’re a Facebook user who is also a fan of T-Pain, then you’re not alone. As of this writing, he has over 12 million likes on his official, verified Facebook page. You can find this rapper on Facebook through his username, which is simply @t-pain. Also, you can click the link right here and be taken directly to his Facebook page.

T-Pain is on Twitter, and he has been there all the way since April of 2009. He has accumulated over 1 million followers on Twitter since he first created his account, and if you’re a Twitter user, you may be happy to know that he uses the social network quite regularly. You can find him through his official, verified Twitter handle, which is just @TPAIN. Click the link here to check out what he tweets about.

T-Pain doesn’t have quite as many as followers on Instagram as he does on Twitter or Facebook, but he still has a pretty decent following with over 900,000 followers. You can find him on Instagram as @tpain, and you can also click the link right here to take a look at the kind of stuff that he shares with his followers.

It’s very possible that T-Pain has an account on Kik. After all, Kik is a very popular messaging app, and it counts a ton of different people among its users. However, T-Pain has never shared any information regarding a Kik username or code with his fans. Although it’s still obviously possible that he has a Kik account, since he hasn’t shared anything, he probably intends to keep it private for now.