Body acceptance is a huge movement happening today. For so long, the only body type that has been glamorized in the media is the standard model type. The men and women who look so perfect that it’s almost entirely impossible that they’re real. However, more and more clothing lines and magazines have started to promote and feature all body types. One model who is taking a stand in this movement is Ashley Graham. She is a curvy, plus size model who believes that all bodies are beautiful and should be celebrated on all platforms.

Ashley Graham has created a strong presence in today’s pop culture. In addition to being a well known model and body activist, she is also an author and designer. Ashley uses her outreach and assets to encourage girls and women of all age to stick together and work hard to reach your goals in life. She herself has put in a lot of effort to get to where she is now and it definitely was not an easy journey.

How Ashley Graham Made Her Claim to Fame 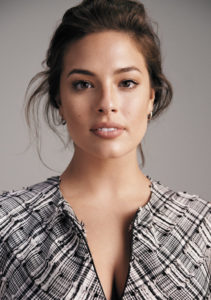 Born and raised in Lincoln, Nebraska, Ashley led a relatively normal life alongside her parents and two younger sisters. She attended Scott Middle School and Lincoln Southwest High school, but her life started to change in 2000 when a scouting agent spotted her at a mall in Omaha, Nebraska.

The scouting agent that reached out to Graham worked for the I & I modeling agency. This particular agency is a smaller group that focuses primarily on taking care of their models and actors. They are a wholesome business that has been in the game for a little over 20 years and ultimately ended up helping Ashley get her start in 2001 while attending a modeling convention.

During that convention, she signed a contract with Wilhelmina Models. This talent agency is headquartered in New York City, but has other locations in other major U.S. cities as well as one in London. Ashley did some work with Wilhelmina for a few years until 2003 when she became a part of the Ford Models team. She was slowly working her way up the ranks, receiving more recognition for her work under these agencies. Ashley’s fierce determination and confidence in herself makes her a model that any photographer would love to work with.

Graham began appearing in magazine editorials alongside other plus sized models to further promote body activism. She was very serious about pushing the message that there is more than one body type and everyone of them is just as beautiful as the next. In 2010, Ashley was featured in a lingerie ad for Lane Bryant. It was deemed controversial for the fact that she wears nothing more than a bra and panties, but you can find more risque advertisements literally anywhere. Victoria’s Secret is known for their sexy advertisements but never criticized for it, just to give an example. You can watch the commercial by clicking this link.

Ashley Graham’s Other Achievements in the Industry

In addition to continuing to work with Lane Bryant, Ashley also did work for Levi’s, Rachel Clark, and Marina Rinaldi. Then having already worked closely with the Canadian plus sized brand, Addition Elle, Ashley was able to design her own line of lingerie with them in 2013. Since the very beginning of her career, Ashley always embraced her curves and was undoubtedly confident in her figure. What she was aiming to do by producing this line of intimates for women was to allow them to love their shapes as well. And it is a common issue today that women who have a fuller figure struggle to find bras and underwear that fit comfortably while also feeling sexy at the same time.

Later on in 2016, Sports Illustrated Swimsuit Issue featured her on their cover, which made her the first plus size model to ever have appeared on the cover of that magazine. Then not so long after that, Ashley starred alongside Joe Jonas for his band DNCE’s music video for their song “Toothbrush”. Ashley received a lot of recognition for that video because Jonas has such a large following and people absolutely loved her performance in it. 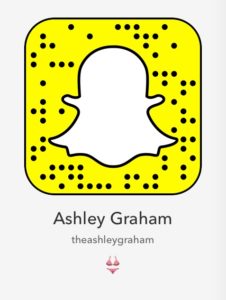 If you wish to add Ashley Graham onto your Snapchat friends list, you can do so by clicking here

Although Ashley doesn’t have a personal Facebook that she shares with her fans, she does have an Official Facebook page. You can like the page by following this link.

Ashley does not currently have her own YouTube channel, but she is featured in various videos if you simply search for her name.