Spain’s World Cup 2010 team was amazing and while they began with a shocking 0 – 1 loss to Switzerland, they bounced back and went on to win the tournament. Spain was coming off a 2008 Euro win and the 2010 World Cup would be one of two titles that the national team would go on to win in the next four years. It was an impressive run fueled by stars at nearly every position. It’s been over seven years since Spain won the World Cup and the starting roster has now changed. Where is Spain’s 2010 World Cup team now? Here we have the latest on that starting XI:

In 2010, Casillas was a starter for Real Madrid and Spain’s national team. Two years later, he became the first player to reach 100 international wins for Spain. His team would go on to win the Euro 2012, helping his country to its third title in four years. Casillas was also selected as the starting goalkeeper for the 2014 World Cup, which was a disappointing tournament for Spain’s national team. Casillas started in two of the group stage games but was benched for the last one for his performance. In 2015, he made a shocking move to Porto after months of speculation. He is still playing for Porto, where he has made 73 appearances.

Sergio Ramos played as a right back during the 2010 World Cup but he is currently one of the best central defenders in football. Spain’s last title was in 2012 but Ramos has continued winning titles for Real Madrid. His amazing header goal in the last few seconds of the 2014 Champions League final actually helped the club keep its hopes for La Decima alive. The game would go to overtime, where they scored a few more goals to finally win the tenth Champions League title.

Capdevila played for a number of clubs after winning the 2010 World Cup. In 2011, he left Spain for the first time, joining Portuguese club Benfica, where he made his Champions League debut. The following year, he returned to Spain, where he played with Espanyol for two seasons. In July 2014, he joined the Indian Super League and five months later, he moved to the Belgian Pro League. In 2016, he signed with Andorra’s Primera Divisio club FC Santa Coloma. He announced his retirement in July 2017.

Puyol was an important part of Spain’s Euro 2008 and World Cup 2010 win. The central defender made 100 appearances for the national team and 481 for Barcelona, including Barcelona B. Puyol won 21 major titles, including three Champions League. In 2014, he announced his retirement and reports later said he had turned down the chance to become Roberto Mancini’s assistant manager at Inter Milan. He also rejected the chance to become sporting director at his former club. He set up his own agency with friend Ivan de la Peña a few years ago.

Pique is currently a starter for Spain’s national team and Barcelona. In May 2014, he signed a new contract extension that will keep him at Barcelona until 2019. Pique is not only one of seven players in history to win the treble with Barcelona but is also one of four players to have won the Champions League two years in a row with different clubs (Manchester United and Barcelona).

Busquets has represented Spain’s national team in every tournament since the 2010 World Cup and is currently the starting defensive midfielder for Barcelona. Busquets is one of seven players in history who have won the treble twice with Barcelona.

Alonso went on to win many more titles after the 2010 World Cup. With Real Madrid, he won a Champions League, two league titles and a Supercopa de España. In 2014, he joined Bayern Munich, where he won several titles. Alonso retired after the 2018 – 2018 season.

Xavi had an impressive display in the 2010 World Cup, with a jaw dropping 91 percent passing success rate. He was included in the UEFA Team of the Year from 2008 to 2012 and became the first player ever to have assists in two separate Euro finals (2008 and 2012). In 2015, Xavi made his last appearance for Barcelona during the 2015 Champions League finals against Juventus. Xavi then signed with Qatari club Al Sadd, where he has scored 14 goals in 51 appearances.

Iniesta has won nearly every title that there is to win during a football career. In 2009 and 2010, he 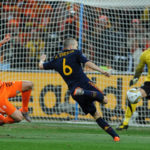 would score two very important goals. The first happened in the Champions League match against Chelsea. The goal is still remembered today as it is not only an impressive shot but also one that gave Barcelona the ticket to the Champions League finals. In 2010, Iniesta scored against Netherlands in the 116th minute of the World Cup finals. That goal gave Spain its first ever World Cup. Iniesta has continued winning titles with Barcelona and last month, he agreed to a lifetime contract with the club.

Pedro, one of the youngest players of Spain’s 2010 starting XI, went on to win several titles with Barcelona. In 2015, he joined Chelsea, where he has scored 18 goals in 72 appearances.

Villa was an important part of Spain’s success during that great run. In 2011, he became Spain’s all time leading goalscorer. Villa would miss the Euro 2012 tournament after suffering an injury in 2011 but would return for the 2013 Confederations Cup and 2014 World Cup. He had announced prior to the 2014 World Cup that he would retire from international football. Three years later, he returned to the national team for two 2018 World Cup qualifying matches. Villa is currently playing for New York City FC and has also made a few appearances for Melbourne City on loan.

Its been seven years since Spain won the 2010 World Cup but their run has not been forgotten as winning back to back Euro titles and a World Cup in the middle of that is something that we don’t see very often.