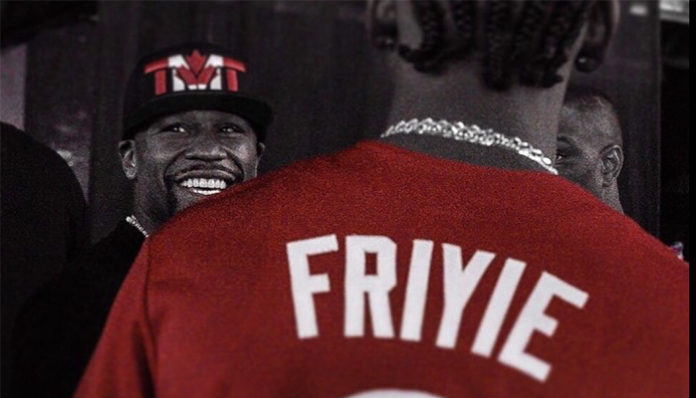 Out of Toronto, Canada, Friyie has recently been making waves in the hip-hop world. From local star to international acclaim, he has been dropping hits since early 2016. For instance, he appeared on local rapper Don Meeno’s project, Giinchy 5x, that year, which brought him some underground attention. With the recent release of his single, Come and Get It however on the web, however, his reputation has begun to soar. A huge success, the track ended up making it onto DJ Carlie B’s summer mixtape.

Currently, his most popular song, Money Team has been played nearly one million times on Youtube. Some of his other big hits include Undefeated, and 5 Ways, both of which were met with praise by fans upon their release. Though he hasn’t put out a full-length project yet, we have no doubt that one is in the works. Don’t let his newcomer status fool you- he has plenty planned for the future. In fact, Floyd Mayweather himself had recently name-dropped him on television, more specifically on The Late Show with James Corden.

At the rate that his popularity is climbing, Friyie will have no trouble carving an identity for himself in the industry. With all that said, how successful has his rap career been so far? Has he managed to bank himself a decent amount from his various endeavors? How rich is he? Unfortunately, it may be difficult to answer this question at this time as his net worth is still under review. For now, our guess is as good as any. While we’re here though, let’s dive a little deeper and get acquainted with the Canadian rapper.

How did Friyie Make His Money & Wealth?

From Toronto, Canada, Friyie spent most of his youth in the Jane and Finch area, where he presumably got into rap. Unfortunately, that’s about all we know about his early life at this time- nothing else has been revealed.

Regardless, it wasn’t until last summer that he started to make waves with his single, Come and Get It. Produced by TwoTone, the track has already been played well over a hundred thousand times on Soundcloud, and to a similar amount on Youtube. A big success compared to his previous efforts, it eventually made its way onto DJ Charlie B’s mixtape in 2016.

Towards the end of the year, Friyie landed a feature in Wala Why’s song, In the Stash (Natty Rasta). From there, he released the single, Legendary, which featured Don Meeno. Made available for streaming online, it has already been played over 22,000 times on Soundcloud alone.

Fast forward to 2017 and Friyie has churned out a number of records at an extraordinary rate. For instance, he dropped Don’t Worry in April, a song that has since been played over 100,000 times on Soundcloud. Then in the summer, he followed up with Undefeated, another hit that enjoyed considerable success online. Some of his other recent singles include Money Team and 5 Ways.

In addition to what’s been mentioned above, Friyie has also done a number of collaborations over the past years. For one thing, he had worked with Don Meeno extensively on his album, Giinchy 5X last year. Some of the said tracks include Running, Pick and Roll, All I Want, Days End, and Came Up.

As mentioned earlier, it’s unclear at this time how much the rapper has made from the above records. One thing’s for sure, it’s not his own stream of revenue. On the Internet, it’s likely that he’s also been monetizing his Youtube channel, which was first established in 2016. From then until now, Friyie has already amassed over 3,100 subscribers with over 1.2 million lifetime views.

Assuming that he earns a couple of dollars per 1,000 views, he would have easily already pocketed a few hundred dollars from his videos alone. Of course, as his popularity climbs further, these earnings are likely to go up as well. Currently, his most popular upload, Money Team has been played over 800,000 views. Doing the math, that works out to be upwards of $1,000 in ad revenue in itself!

As far as concerts and the likes go, it doesn’t seem like he’s had the opportunity to put on any tours yet. Having said that, he did put on a show in his native Toronto, Canada, last March.

Unfortunately, Friyie has never revealed whether or not he’s currently dating someone. In fact, not much is known about his private life at all, if anything. Should we learn more about his dating situation in the future, we’ll update this section.

Does Friyie Have Any Children?

No, Friyie does not have any kids as far as we know

Did Friyie Go to College?

Like his dating life, no information has been made available on his education history. For now, it’s unclear whether or not he has completed high school or has gone to college.

What is Friyie Famous For?

Friyie is perhaps best known for his single, Money Team, which has since been played over 800,000 times on his official Youtube channel. Most recently, he released the song, Undefeated on August 23, 2017.

A Canadian rapper, Friyie currently resides in Toronto, Ontario. Growing up, he spent most of his youth in the Jane and Finch area.

Unfortunately, pictures of Friyie’s home are unavailable at this time.

What Kind of Car Does Friyie Drive?

At this time, we do not have any information on Friyie’s vehicle.

How Much Money Did Friyie Make Last Year?

We do not have any information on Friyie’s 2016 earnings at this time.

As mentioned before, the hip-hop artist recently dropped the single Undefeated on August 23, 2017. Featuring production from TwoTone, it has picked up close to 200,000 views on Youtube. Will he be delivering a full-length project sometime in the near future? Only time can tell. For now though, if you’d like to stay on top of his releases, it may be a good idea to follow him on Soundcloud.

Interested in following the rapper on social media? As it happens, he’s active on a few of them. You can find Friyie on Twitter at @FriyieMusic and on Instagram at @artofvangogh.