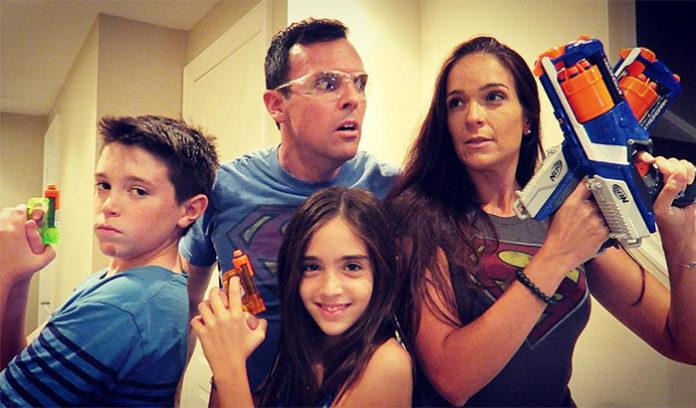 A Youtube personality, Andres B. is the patriarch of the popular Eh Bee family. Based in Toronto Canada, he launched their channel in 2013, as a platform for there family’s vlogs. Since their rise to fame, however, they’ve gone on to include a variety of other videos, from challenges, to cover songs, all of which are extremely popular among fans. To date, their most-viewed upload, Gummy Food Vs Real Food, has generated over 59 million hits.

As of 2018, their Youtube channel has amassed over 4.9 million subscribers with more than 929 million views. With how they’re constantly adding new videos, it wouldn’t be surprising for their following to surpass the 5 million mark sometime in the near future. In fact, they had gained over 2 million followers in 2017 alone!

With all the views that they reel in from their channel, surely they must make a decent amount of money from their videos? How rich are Andres B. and his family? According to sources, they currently have an estimated net worth of $700,000. How much of this came directly from their success on Youtube? Do they have any other ongoing projects? Let’s take a look below.

How did Andres B’s Make His Money & Wealth?

Born on November 25, 1977, in Chile, Andres B is the patriarch of the popular Youtube family, Eh Bee. Prior to their rise to fame on the video-sharing platform, they also had a decent following on Vine, which is now defunct. Before launching their online career, he had worked in web development and marketing. Based in Thornhill, Ontario, the family of four also includes Mama Bee (Rossana Burgos), Mr. Monkey (Roberto Burgos), and Miss Monkey (Gabriela Burgos).

Like many Internet personalities, Andres B and his family originally rose to fame on Vine for their six-second clips. Known for their family friendly content, they had amassed well over a million followers on the app by the time it shut down in early 2017.

Perhaps their most noteworthy account of all, however, is their Youtube channel. Launched in June 2013, they are known for uploading a variety of “crazy family fun videos”, all of which are incredibly popular among viewers. Though they initially used the site for vlogging, they’ve since gone on to include other content such as music videos, challenges, reaction videos, and more.

As of 2018, Andres B. and his family have amassed nearly 5 million subscribers with more than 929 million views across their videos. Some of their most popular uploads include Gummy Food Vs Real Food, Fidget Spinner vs Fidget Spinner, Disney Descendants Party, and There’s a Pool in Our Hotel Room.

With the audience that they have, how much does the family make on Youtube? According to sources, their channel generates over 2 million hits a day on average; assuming that these are all monetized views, they’d easily earn upwards of $4,000 per day from their videos (approximately $1.6 million a year). Assuming that their subscriber count continues to grow with time, it’s more than likely that this amount will also increase in the future.

Is Andres B Married?

He has been married to Mama Bee aka Rosanna for many years.

Does Andres B Have Any Children?

He has two children with his wife, a son named Roberto (Mr. Monkey) and a daughter named Gabriela (Miss Monkey).

Did Andres B Go to College?

At this time, it’s unclear whether or not Andres B has gone to college.

What is Andres B Famous For?

Andres B is best known as the patriarch of the Eh Bee Youtube family. Incredibly successful, they currently have over 4.9 million followers

Where Does Andres B Live now? Photos of Andres B’s House

Andres B. and his family currently reside in Thornhill, Ontario in Canada. Photos of their home are unavailable at this time.

What Kind of Car Does Andres B Drive?

We do not have any information on Andres B’s vehicle at this time.

How Much Money Did Andres B Earn Last Year?

At this time, it’s unclear how much Andres B. and his family has earned in 2017.

For the most parts, Andres B has been busy filming videos for his family’s Youtube channel. If you don’t want to miss out on their videos, be sure to subscribe to their channel.

If you’re interested in following them on other social media platforms, you can find the Eh Bee family on Twitter at @EhBeeFamily or on Instagram at @ehbeefamily. On Facebook, you can also visit their official page by clicking here.