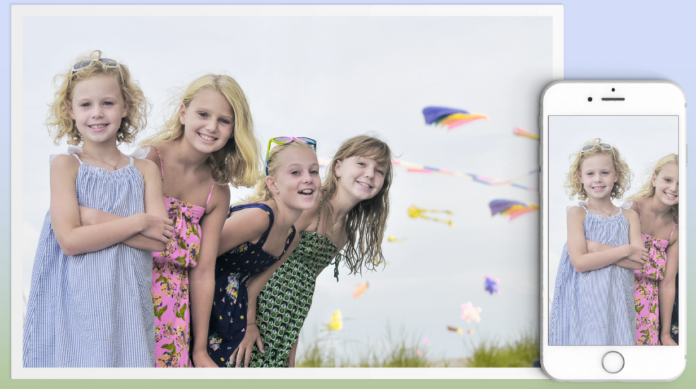 Flag got off to a good start. Way back in 2014, they launched on Kickstarter. Their goal was $10,000, but they ended up raising an impressive $169,187 from over 5,000 different backers. Although the product launch was delayed over and over again, it finally released in the summer of 2016 – just 3 months before they appeared on Shark Tank. Would this release prove the model enough to get a deal from the Sharks? Let’s take a look. 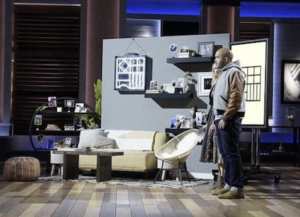 Sam and Savannah walked out onto the stage, and into the Shark Tank. Savannah told the Sharks that they were here to talk about Flag. She requested $375,000 in exchange for 5% equity of their company. Savannah starts off the presentation by telling the Sharks that the number of photos people take each year has tripled since 2010. It was projected to grow by 1,300,000,000,000 x 2017.

Sam spoke up, telling the sharks that they probably already knew that the majority of photos are taken on phones. Savanna admitted that she took photos every day. Her phone was always available and her kids were adorable. She stated that the problem was that even the best ones might not make it off of her laptop or phone.

She and Sam created Flag to counteract that problem. Sam said it was the world’s first truly free photo printing app so that there is no printing or shipping charge, no subscription, or credit card required. Savannah explained that they were using the blank space on the back of photos that have been wasted for over 100 years. That space would be used to deliver targeted ads.

Savannah said that the idea was simple. The customer would get free photo prints, and advertisers would be able to deliver ads that will be kept for decades. Sam told the Sharks that they should get in on the opportunity to help them develop flag and print money together.

Mark asked to see some samples. Savannah began to pass them out. Kevin thanked her for his sample and then stated that they were very large companies are already taking the photos that people take, print them, and send them to people. He’d already sold a Shark Tank company called Groovebook to Shutterfly. He wanted to know why larger companies wouldn’t have taken advantage of it already if the model was to work. Of course, the larger companies already had a customer base of millions of people.

Sam told Kevin that they thought about that. Kevin said that he was glad, and asked what the answer was. Sam said that there are a couple things that people don’t know about photo printing. It required a different technological stack to make double-sided prints than what companies such as a Shutterfly already had in place. Now is claimed that they could do it if they invested a lot of money. Sam said that the reason that Flag was able to do all of the fancy shapes and finishes, and have completely customizable orders is that they are laser printing their pieces. He insisted that Shutterfly and all the other big businesses don’t do that.

Sam went over to a screen that was on the stage. He showed them that people would be able to customize the frame that they get. Sam said that it was very easy to use. Lori wants to know how he was getting companies to pay for the advertising that was on the back. She also wants to know how many advertisers they had already. Savannah let her know that they sold $150,000 in advertising in just three months.

Kevin asked her what kind of companies they sold advertising to, and she let him know that number one advertiser was Visa. Barbara sarcastically said that they’ve never heard of them. Kevin asked him to clarify that they were talking about the credit card company. Sam insisted that it was, and said that these and believed in their company because they were able to turn ads into gifts.

Chris Sacca asked the entrepreneurs behind Flag how much money they’d already raised. Sam admitted that raised $1.6 million. The Sharks seemed taken aback. Chris wants to know what valuation they gave the previous investors. Sam told him that they did not raise it all in the same round. The last time that they raised money was a year ago, which came in at a $5 million valuation.

Barbara asked them how many photos they had sent out with the advertisement on the back. Savannah told her that they’d been in the market for three months, and each month they sent out 800,000 to 100,000 photos per month. Lori seemed impressed. Savannah continued, stating that they were outsourcing all of their production currently. Sam said that when they start to produce everything themselves, their cost per pack would come down dramatically.

Lori asked him what their costs per card were, and what was the ad revenue that they got per card. Sam mentioned that it was a dollar per ad. Barbara was surprised, and said that should be a very targeted ad for that price. Savannah stated that it was. Sam said that the Sharks needed to remember that they were print advertisements, not clicks. It was more comparable to a catalog than a website.

Chris reminded them that most of the ads would be facing the back of a frame. Sam said that they shipped 20 free prints each month, and insisted that people wouldn’t frame 20 photos a month. Savannah also said that Flag’s prints were such high quality the people would want to send them to friends and family. It would be something that customers put up in their cubicle at work, or display on their coffee table. Chris asked if the ads were working for the companies yet. Sam told them that the ads hadn’t started running for them yet. He saw the look on the Sharks faces, so he quickly followed up by saying that they were sold, and they’ve been paid.

Chris asked if the laser printing technology or the double-sided printing the was unique to them. Sam said no. Mark clarified the question, asking if he could go out and buy each of those printers themselves. He said that they theoretically could. Kevin let them know that there is nothing proprietary about their business. He said that he likes them, and their concept, but he was worried that a “big foot” was going to come down and squash them like the cockroaches that they were.

Savannah said that they were on Shark Tank because they need to insource production. They are spending a lot of money having other people produce their product – they were print, laminating, and cutting all in different facilities. Mark Cuban was concerned that something was not adding up. He pointed out that they had raised $1.6 million, and they were asking for $375,000. He asked why they didn’t use the money from what they’d already raised to get them everything that they needed. Sam casually mentioned that they were also raising another $3 million.

Mark laughed and asked them if they didn’t think that they should mention that to the Sharks. Sam apologized. Barbara said that she didn’t like the numbers she was being given, and she would have to put out a lot more cash in order to make it work. She went out.

Sam and Savannah thanked her. Sam asked her if they could say one thing about their ads model. Barbara said that she didn’t quite trust him. Kevin stated that that was natural for Barbara, and Barbara said that it might be the English accent. Kevin said that what he wants to know is if it worked. He said that there is no way to know because they had rolled out the ads yet. Savanna said that their appeal was that they had been in the market for three months, and brands were compelled by the idea. Kevin stated that they didn’t really know if Visa was coming back. He would need to find out if the advertisers got a return.

Kevin said they should be really motivated to solve the problem. Sam insisted that they were. Kevin told him that the answer wasn’t to just take more money from the investors. They should be saying that their big brands were coming back, it worked, and now they need to another investment. Kevin said that he felt like he needs to come over and spank them with a ruler for not focusing on the thing that mattered. He thought that they were on the cusp of the abyss. Mark asked him what he was going to do, and Kevin went out.

Lori told them that she had been burned before by a similar model. She didn’t see an issue with customer acquisition, but with getting advertisers and keeping them interested. She went out. Mark Cuban said that they had too many balls in the air. He saw it as an insurmountable obstacle. Mark went out. Sam spoke up then. He wanted to make sure that the Sharks understood he was promoting a freemium model. Customers would get the first 20 prints free and then they would pay for additional prints. He said he didn’t anticipate all of their revenue needs to come from advertisers.

Chris was not having it. He criticized Sam for leaving this information out until all the Sharks were practically out. He said that the pitch needs CPR. Chris said they were one competitor having access to the correct equipment from not being able to charge anything for their product. Sam tried to speak up to defend himself, but Chris went out, stating they he doesn’t make deals with businesses that engage with out of touch advertising and were burning cash.

Since not getting a deal on Shark Tank, Flag has pulled its app from the iOS app store. They raised another $331,949 from a brand new Kickstarter, which was over 30x their goal. The campaign was funded on October 26th, 2016, and the entrepreneurs were expected to deliver in March of 2017.  However, they appear to have completely disappeared from the internet, and their backers are mad. According to the FAQs on the Kickstarter, they got too many subscribers for the app and were unable to keep up with the level of production. In a backer’s only update, Flag said that they were taking everything offline until they were able to regroup and get things under control. That was in April of 2017, and backers are getting impatient. Many of them are understandably clamoring for refunds. If you wanted to sign up for the app yourself – well, you can’t, unfortunately. Keep an eye out for Flag if you are interested, but I wouldn’t hold your breath.