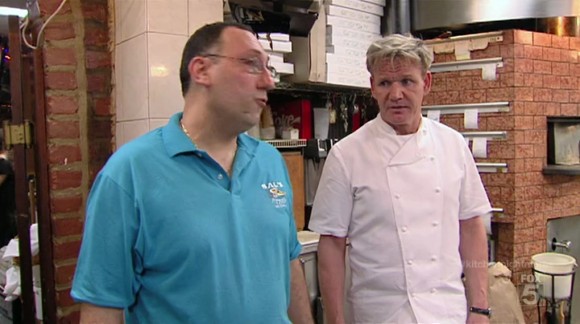 Founded in Brooklyn, New York 55 years ago and owned by John Esposito (a second generation restaurant owner), Mama Maria’s is a new take on what the usual spot happens to be for Kitchen Nightmare Episodes. Unlike most establishments, Mama Maria’s is actually a 2 in 1, paired with Sal’s Pizzeria next door and owned by the same person, with Mama Maria’s being named after John’s deceased mother. Unfortunately, in recent years John’s focus on the pizzeria has seen the decline of Mama Maria’s food quality, service, and reputation. It doesn’t help that John has been said to be extremely stubborn, and the staff all recognize that there is a lot wrong with the restaurant. Can Chef Ramsay make the needed changes to Mama Maria’s before it closes down? Let’s take a look.

Starting out the episode, Chef Ramsay notices that the front sign is wrecked with plenty of holes in the lettering. He then meets with the manager, who states the owner cut out the letters as he noticed that they were wearing away, which is an odd choice. Going next door to the pizzeria, John meets Ramsay and states he always works front counter and making pizza. When asked about the letters, he states that the “wind did that”, which is clearly a lie. John, when asked about both establishments, says they are both for his mother and father respectively, and that the main problem is a downturn in customers. Ramsay then takes a seat and asks a waitress what’s wrong. She replies that it’s a lack of leadership. When given a menu, he orders the tortellini, spaghetti and a Margherita dish. He is then met with a dessert waitress who shows him his options, which features an exceptionally moldy small cake, which is more suited to developing antibiotics than it is being served. This causes a conflict between a manager and Ramsay, as he states it’s for “display only” and complains about the potential loss of food. This causes the owner to panic a bit, just as the first dish comes out.

When the tortellini comes out, the chef openly admits he’d rather have Ramsay throw it at him than actually serve it to Ramsay. Despite the pasta menu stating it’s made fresh on site, it turns out the pasta is frozen, which is an odd choice, and the flavor is bland. After this dish, Ramsay looks at the décor and it looks very dirty and musty, and he notices that a plant is severely overwatered, leading a rancid liquid landing on him and a few guests, who he promises free dry cleaning to. The next dish, spaghetti, and meatballs are not promising as the meatballs are frozen and look like stones. Lastly, the Margarita Pizza comes out, which is so greasy it could be wrung out. He sends it to the owner to have a taste and claims he shouldn’t be around if no one else cares. The owner says he’s had enough and starts tossing boxes away.

Ramsay heads into the kitchen to have a full staff meeting. During the meeting, it’s clear the chef wholly agrees with Ramsay and states he’s embarrassed about how it’s being run, stating he doesn’t have a choice in the matter. Ramsay picks up his side and criticizes with John, which causes a conflict. In the end, Ramsay thanks the chef for his honesty, claims John is living in a memory and leaves citing the need for a shower. John remains stubborn that he has to prove Ramsay wrong for the dinner service, which quickly turns south as John asks the cameraman to leave him alone to make pizzas and ignore Mama Maria’s. The food coming out of Maria’s is hard to ignore, however, as most of the food is bland or freezer burned, and at least in one case, there is a bone found in a vegetarian’s dish, which is beyond bad. John doesn’t really see a problem in this as that’s “how we prepared food in the past 40 years”. At least one customer got very sick during this service, through some funny tasting lobster tail. Ramsay asks to see the tail, which is wholly rotten and ammonia-scented (a sign of advanced decomposition). Ramsay orders an ambulance called, and the customer is clearly not doing well. As the EMS comes in, other customers are clearly spooked, and it brings a shocking end to the night, and both chefs order that the restaurant close down. 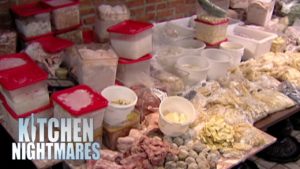 After dinner, Ramsay speaks with the owner who states he’s been thrown into this situation and asks for Ramsay to help him change. He replies he can’t be a member of staff anymore, and he needs to step back and run the place properly. John states he can’t do it and walks away. Ramsay follows him in and tells him to go rest and to get into the fight tomorrow morning, for his kids. He agrees as the kitchen is cleaned. The next morning, Ramsay checks out the freezers and finds nearly everything is frozen, with no labeling, plenty of freezer damage, and in some cases frozen mold. Next, he holds a staff meeting to first inform everyone that the ill customer recovered, and then shows them all the frozen food. John openly admits this is his fault, says he let it get out of hand, and is refusing to change. It’s clear he’s still treating the business as it was when his parents died and he needs help coming into the present. In a private talk, he states he doesn’t want to be scared anymore and wants to be there for his kids. Ramsay understands but says it’s his turn to step away from the pizza oven, which is his safety net.

The next morning, a renovation is shown, including a brand new sign, custom art (including his parents shown in full-sized canvas, and tables covered in news clippings of himself and his parents) and a more vibrant New York décor. Next up, the menu is revamped including fresh ingredients and smaller portion sizes focusing on quality. As a final touch, John is presented with an owners jacket and told if Ramsay catches him near the pizza oven, he’ll put John in it. In terms of the relaunch, John does have some significant stress to deal with as critics fill the place, but in the end, it comes off as a success. But can this be continued into 2018? Let’s see where Mama Maria’s is in 2018. 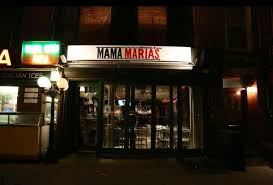 After Kitchen Nightmares, Mama Maria’s saw a vast improvement in ratings, and about a 10% uptick in foot traffic. Despite mostly keeping to Ramsay’s suggestions, there have recently been some additions of revamped items that did originally show on the menu, though these were specifically for customers who requested it. As of 2018, Mama Maria’s is still open, with a Yelp rating of 4 out of 5, with 99 reviews since 2006, and years 2014-2018 having an average closer to 4.5, which is fantastic. The official website is also still open, under Salspizzastore.com, which is the accompanying pizzeria. As a fun fact, the attached Sal’s Pizza was featured in an episode of Brooklyn 99. It appears that what started out as a nightmare ended on a very pleasant note.