Billy Thompson is a man who can sympathize with the thousands of people who have to deal with the embarrassing issue of excessive underarm sweat. He suffers from the medical condition called hyperhidrosis, which causes him to sweat a lot more than your average person. It is because of this condition that Thompson set his time and efforts toward producing a line of clothing for people struggling with the same issue. 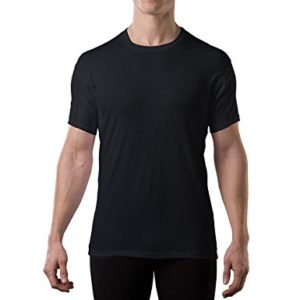 As most people know, being out in public with sweat stains is terribly embarrassing. If you’re making a presentation or going in for an interview, the excessive sweat may cause people to suppose your nervous or just generally put them off. It isn’t a pleasant experience for anyone involved. So, in an attempt to remedy the issue, Thompson reached out to fashion designer and close friend, Randy Choi. They put their heads together and came up with the Thompson Tee.

Thompson and Choi were able to create a “sweatproof” material that would help people avoid embarrassing stains and ruining expensive clothing. This “Hydro-shield sweat-proof technology” was patented in 2014 and the Thompson Tee line was launched not long after that.

They began selling shirts via Amazon and their own official website. Purchasing a shirt could cost anywhere from $25 to $32, which is actually pretty inexpensive as far as clothing goes. People were showing an interest in their sweat-proof lifesavers, but starting a new business is never easy. Thompson and Choi needed to find an investor to help grow and improve the company. Naturally, they decided to take the Thompson Tee to the Shark Tank in the hopes someone would bite.

Both Thompson and Choi enter the Shark Tank and they’re asking for a $700k investment in exchange for a 7% stake in their clothing line. The Sharks are immediately unimpressed with their ridiculously high evaluation of the company, but that doesn’t seem to discourage the owners. Instead, they jump straight into their pitch. 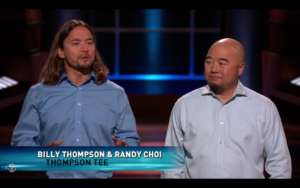 Almost everyone, Robert Herjavec included, has experienced the embarrassment of excessive sweat. The Thompson Tee is designed specifically to avoid that problem altogether and comes with a 30-day guarantee to prevent armpit stains. Additionally, the company boasts being a USA based business. This means all their shirts are currently manufactured in the states, which is something that is likely to appeal to a vast majority of American consumers.

Sharks are then given samples of the shirts. They are simple enough in appearance, but there’s a distinct difference between the Thompson Tee and a generic undershirt. In the armpit seam of a Thompson Tee, there are three extra layers of fabric. One layer is a medical grade compound polymer that allows vapor to pass through. So there is a science behind the production of the shirt and they do have a patent on it.

Before they get into sales details, the Sharks want to know the story behind this company. Thompson admits to having dealt with excessive sweat for almost his entire life. When he reached out to Choi and told him of his idea, he could also sympathize because he too has hyperhidrosis. They both became passionate about the project because 1% of people also have hyperhidrosis and another 35% have dealt with excessive sweat on a situational basis.

Many people go out of their way to buy clinical strength deodorants and other products to avoid sweat stains, but many of them don’t work as well as they should. This means people are spending tons of money for mediocre products. However, by purchasing a few Thompson Tees, customers will actually begin to save money an have a product that is effective in warding off sweat stains. Additionally, they offer a traditional and slim fit option for the shirts and prices range from $25-$30.

It only costs $8.50 to produce a shirt and all sales are made direct to consumer via the Thompson Tee website and Amazon. During their first year of business, they made $90k. During their second year, sales increased to a half a million. This year is their 5th year of being operational and they are currently on track to making $4 million in sales. 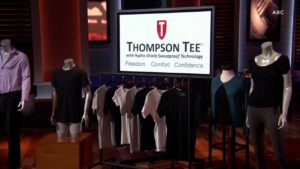 Considering the business is already doing so well, the Sharks want to know what Thompson and Choi plan on doing with such a large investment. Their overall goal is to bring manufacturing in-house instead of using an outside manufacturer. Daymond John thinks this is a bad idea because it would only become a waste of time and money. The marketing system they have now is working exceptionally well and they are already making a profit from it. John feels as if they are making a mistake and does not offer them a deal. Additionally, the overall evaluation of the business is ridiculously high, which has turned Kevin O’Leary off from investing.

That leaves Robert Herjavec, Mark Cuban, and Lori Greiner still in the tank. According to Cuban, Thompson and Choi didn’t come into the Shark Tank with a clear vision of what they planned on doing with the money and that “scares” him, so he doesn’t want to invest. Herjavec, on the other hand, sees potential in the business. He likes the product and can relate to the issue of excessive sweating. Because of that, he decides to make them an offer. For a $700k investment, Herjavec wants 25% of the business instead of 7%.

Considering that it’s such a large jump in percentage, Thompson and Choi aren’t immediately excited. Instead of responding to the offer, they look to Greiner for her input. She admits to liking the product and can see that they are doing well as a business. However, it is not a product she is particularly excited about and does not want to make them an offer.

Now, with no other deals on the table, they look back to Herjavec. Before the partners 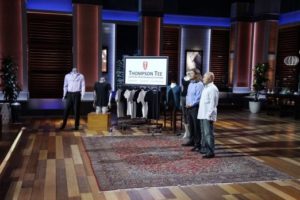 make a final decision, they want to know Herjavec’s thoughts on what direction to take the company. He tells them that although he’s willing to offer some input, he’s mostly investing in them. What they decide to do with the $700k is primarily up to them.

Seemingly out of nowhere, O’Leary chimes back in to make an offer. He will give them the $700k as a loan with 18% interest in addition to also taking the 7% equity in the business. It’s pretty clear which is the better offer, so it doesn’t take Thompson and Choi long to decide. They agree to take Herjavec up on his offer and become partners with him.

Since appearing on Shark Tank, Thompson Tee has still been doing considerably well. Going in on a deal with Herjavec helped project them towards more success. Their antiperspirant shirts have been featured on The Doctors, ABC News, and CNBC. People have seen the Thompson Tee and love how it works, making it a very popular Shark Tank product.

If you are interested in learning more about the company and their products, you can visit the Thompson Tee website. You’ll find all their available products in addition to blog posts that talk about excessive sweating, its causes, and other products that will help keep your arms dry.