What Happened To Jerry Doyle? 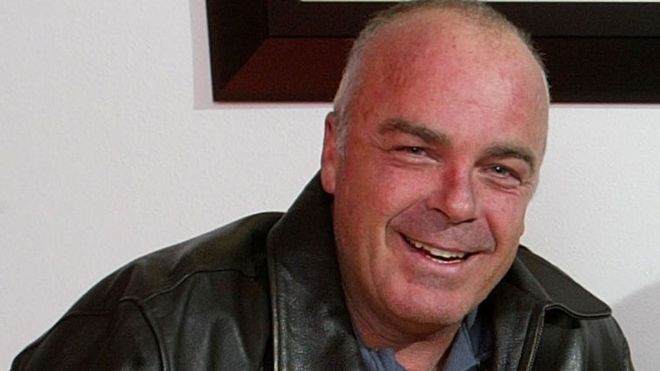 Jerry Doyle might have been a polarizing figure both behind the scenes of Babylon 5, but there is no questioning his talents on the screen. Perhaps better known now for his talk show than for his work on the greatest and most influential Sci-Fi show ever made, Jerry had a long and industrious career in the business. To answer the question in the title, he is ow no longer with us, having passed away back in 2016. A sad day for fans to be sure. Still, his life and career are as interesting as anyone. He didn’t start acting until the early nineties, having been a corporate jet pilot and stockbroker for over a decade. Early success in Moonlighting, with him, pegged as a possible replacement for Bruce Willis’ character on the show led to more and more bookings before he landed a leading role in the ensemble Sci-Fi hit Babylon 5. I always thought he looked a bit like Willis so that Moonlighting fact was a bit of personal vindication.

So let’s take a look through the life and career of Jerry Doyle.

Jerry Doyle was born on July 16th, 1956 in Brooklyn New York. He was put up for adoption at birth and spent the first six months of his life in an orphanage. He was raised the eldest son of a police officer, which might explain his latter-day affiliations. While young he had his heart set on flying, and in 1978 he graduated from Embry-Riddle Aeronautical University earning himself a Bachelor of Science Degree in Aeronautics, while simultaneously getting his flight training. He landed steady work as a corporate jet pilot for a number of years before moving into the stock market.

After ten years as a stockbroker, he decided he wants to try his hand at acting. The 35-year-old Doyle moved into the business with aplomb and a rare talent for the craft. His first role was little more than a bit part in the hit show Moonlighting, where he played one of many hopefuls vying for the part of David Addison. He followed that up with minor appearances in Homefront and Reasonable Doubts before landing a role in, Babylon 5 The Gathering. 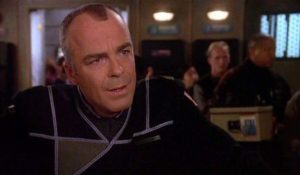 Jerry Doyle played Michael Garibaldi in Babylon 5 for the duration of the shows run. He played a no-nonsense by the book security officer, an old war buddy of the original Commander of the station, and like every other character on the show, he went through both major character development, and the wringer over the course of five years. While stalwart in the first few seasons, his turn as a foil in the latter half of season 4 is probably his shining moment. We are led down a rabbit hole with the character, and Doyle put in some terrific performances, both emotive and powerful. I don’t want to spoil anything, but I will say that his on-screen chemistry with Walter Koenig made for some of the most compelling television of not only the nineties but all time.

His acting career after Babylon 5 was far from amazing. I don’t know what happened, he was a good actor, behind the scenes he was described as a little standoffish, but supremely dedicated to filming going smoothly, so it is a real shame that all he has in his credits pile is a few bit parts in a variety of shows, like JAG, and The Republic of Doyle. Thankfully he saw success elsewhere. He started a radio show, called The Jerry Doyle Show, which soon proved popular enough to syndicate, and by 2012 was the third most listened to on the market. Granted the Radio market is a small one these days, but that is an impressive feat. Known for his Libertarian views, he was an outspoken supporter of Ron Paul, and while I cannot condone some of his views, I at least enjoyed listening to him describe them. If you ever have a few hours free they are all online.

In the mid-nineties, he married former B5 co-star Andrea Thompson, but they divorced two years later. Jerry Doyle had for years battle with alcoholism, and while he was clean in his later years, it had taken its toll on him.

When did Jerry Doyle Pass Away?

Jerry Doyle died on July 27th, 2016 of natural causes at age 60. Far too young an age these days. The years of alcohol abuse had done a number on him, and likely hastened his demise, but there is little you can do in hindsight. He was very politically active in his later years, and his career was booming, making it doubly sad to see him pass away. He is survived by his son, Alec Doyle.