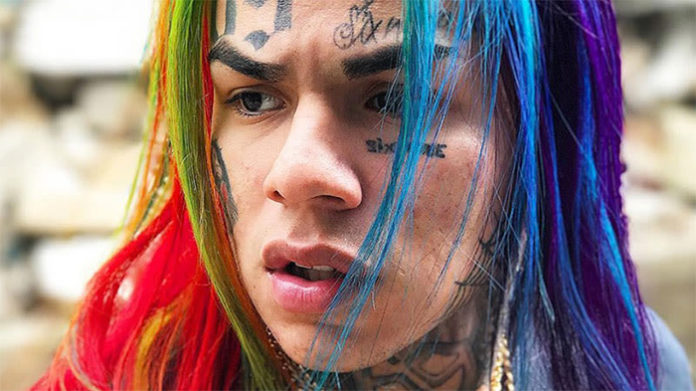 Hailing from New York, 6ix9nine made himself known to the hip-hop world with his debut single, Gummo in 2017. Relatively successful, it eventually made its way onto number 12 on the U.S. Billboard Hot 100. Riding on his initial momentum, he later dropped another track, Kooda, which peaked at number 50.

Around that same time, he gained a significant amount of attention from users on social media dubbed him as the “final boss of all Soundcloud rappers.” Quickly viral, the post also turned his eccentric appearance- mainly his rainbow grill, and rainbow-dyed hair -into an online meme. Most recently, he collaborated with A Boogie wit da Hoodie and Fetty Wap on the single, Keke.

How successful is the 21-year-old rapper? How much money has he managed to earn over the past year? How rich is he as of 2018? From what we can gather, 6ix9ine’s current net worth stands at approximately $100,000. What are his biggest moneymakers? Where did he earn most of his wealth from? Hopefully, we’ll be able to provide some answers to these questions below.

How did 6ix9ine Make His Money & Wealth?

Born on May 8, 1996, in Brooklyn, New York, 6ix9ine (Real Name: Daniel Hernandez) is of Puerto Rican descent from his father’s side and Mexican descent from his mother’s side. Growing up in the Bushwick neighborhood, he only attended high school briefly, before being expelled during the eighth grade. Following his father’s murder in 2009, he began working multiple jobs- including selling marijuana, to help his mother.

As far as hobbies go, he listened to a variety of bands in his early teens including A Day to Remember, and Parkway Drive. Before he knew it, he had started to get into rapping himself. With that said, it wasn’t until 2017 that he decided to take the hobby more seriously.

On November 10, 2017, the twenty-something released his debut single, Gummo. His breakthrough hit, it eventually reached as high as number 12 on the Billboard Hot 100 chart, however not before garnering his fame and attention on the way.

From there, the rapper released his next single, Kooda on December 23, 2017. His second official release, it performed fairly well, having managed to debut at number 61 on the U.S. Billboard Hot 100.

Since then, 6ix9ine has also collaborated with Fetty Wap and A Boogie wit da Hoodie on the track, Keke. Released earlier this month, it peaked at number 43 on the Billboard Hot 100 and at number 26 on the Top R&B and Hip-Hop Songs chart.

Though it’s unclear how much the rapper has earned from the above-mentioned efforts, it’s likely that his music career is going in the right direction. In fact, it has already been announced that he will be releasing his debut mixtape on February 23, 2018, though its title has not yet been revealed.

Going by what he’s put forth so far, it’s likely that his presence in the hip-hop community will only continue to grow with time- especially if he manages to dish out a few full-length projects in the next year.

As far as we know, the rapper is currently not in a relationship. If he is seeing someone, he’s doing so out of the radar.

Does 6ix9ine Have Any Children?

No, he does not have any children, as far as we know.

Did 6ix9ine Go to College?

No, he has not gone to college. After getting expelled from high school in the eighth grade, he has not returned to continue his education. Instead, he worked several jobs to support himself and his mother.

What is 6ix9ine Famous For?

6ix9ine is perhaps best known for his debut single, Gummo, which reached number 12 on the Billboard Hot 100 (his highest-charting single to date). Recently, his popularity also peaked with the release of the collaboration, Keke with A Boogie wit da Hoodie and Fetty Wap.

Where Does 6ix9ine Live now? Photos of 6ix9ine’s House

6ix9ine is currently based in Brooklyn, New York. Unfortunately, further information on his abode is unavailable at this time.

What Kind of Car Does 6ix9ine Drive?

Information on 6ix9ine’s vehicle is unavailable at this time.

How Much Money Did 6ix9ine Earn Last Year?

Information on 6ix9ine’s 2017 earnings is unavailable.

As mentioned earlier, he is currently working on putting together his debut mixtape, which will be released next month.

Want to follow the New Yorker on social media? You can find 6ix9ine on a few platforms including Twitter at @Official6ix9ine and Instagram at @6ix9ine_. If you’re on Facebook, you can also drop by his official fan page here.