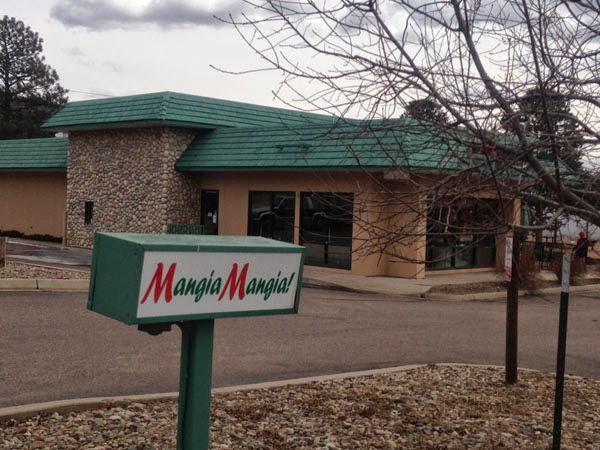 Cook Kevin explains that Mangia Mangia is run like a Jerry Springer show. The staff fights a lot, and Julie has a tendency to yell instead of solving the problem. She also uses colorful, insulting language. Mike, the prep cook, says that when she gets mad, you have to stay out of her way or else you suffer her wrath. The king-of-the-world attitude that Julie has is the biggest problem that the staff has.

However, Julie’s biggest problem with the restaurant is her head chef, Trevor, who thinks he’s a god. The staff also hates Trevor, finding that he is disrespectful, not very nice, and has fits. He has thrown stuff at the staff, intentionally given wrong orders, and has walked out before. Even more interesting is that Mangia Mangia has a drive-through window. The drive-through window screams ‘fast food’ and not casual, fine-dining. The food isn’t cooked with much love, although it is cooked with stress and a microwave.

Julie has had more people tell her what is wrong with her than ever in her entire life. Julie feels like it’s open field day on Julie, and she has reached her breaking point. She is stressed and cannot take any more. If the restaurant goes out of business, she will lose everything. She has put all of her money into the restaurant, and calling on chef Gordon Ramsay is the absolute last resort.

The last resort for Mangia Mangia has arrived in Woodland Springs, Colorado. The first thing Gordon notices is the drive-through window and says that it looks more like a fast-food restaurant than a fine dining and casual experience. This is a first for him, and he is curious if they have tables inside. Gordon pulls up to the window and meets Janelle, Julie’s daughter. He asks if they have tables inside (which they do), although his next question is why do they have a drive-through. Janelle explains that people call in an order and pick it up. How many guests drive by a day, though? Only one or two. 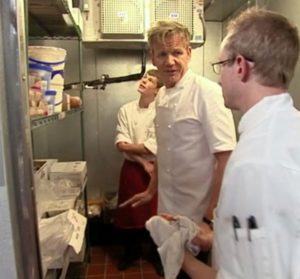 Gordon insists on the full experience, so he orders through the drive-through. The soup of the day is chicken and wild rice, so he orders one of those. Janelle is already stressed and looking to Julie for answers. The soup is loaded into a styrofoam cup and passed through the window to Gordon, who has been timing the experience. Gordon comically honks his horn and reclines in the driver’s seat, but the food finally arrives after 10 minutes.

The drive-through kitchen window is a first for Kitchen Nightmares. Gordon pulls to a parking spot and opens the soup, which looks like a mixture of flour and vomit. The cup is only half full, as well. He opens his cutlery, which only contains a knife and fork – no spoon. He laughs at the entire thing, although the soup is thick enough to eat with a fork. Inside, it turns out that Julie had forgotten to give Gordon the spoon, and Julie lays into her for that.

The soup is ghastly, and Gordon struggles to take more than a few bites of the soup. He exits the car and enters the restaurant, which looks just like a typical fast food restaurant. He finally meets Julie and explains that the drive-through is a first. The soup was also horrible, as it was thick and bland. Gordon and Julie retreat to a corner, although every booth is equipped with frilly curtains to raise the booths up and increase privacy. Gordon rolls his eyes before launching into questions.

The place still looks like a fast food restaurant, and Gordon sees nothing Italian in the building whatsoever. Julie has never been to Italy, and she is Irish. Fake Christmas lights adorn the walls, although Julie feels that they provide light. Gordon asks for more information about the staff and the problems. Julie immediately points to Trevor, saying that he has an attitude. She hasn’t fired him, though, since it’s hard to get help in Woodland Park. So, who is in charge of the standards? Er… Julie is. But she just confirmed that she has kept the wrong chef for nearly four years, since the first day Mangia Mangia was in business. All that matters is Trevor shows up and does what he’s supposed to do 90% of the time. Trevor has never worked in a restaurant and has no background or training. He started by washing dishes, although he does not get along great with the rest of the staff. 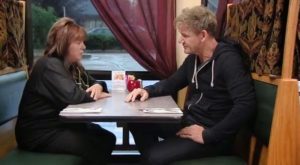 Gordon is finally shown to a table, and he orders the wild mushroom ravioli, veal piccata, the fresh Pacific salmon, Mama’s own meat lasagna, and meatballs. The kitchen begins to prepare his food, although Trevor and Julie begin to provoke each other almost instantly. The mushroom ravioli is served in an alfredo sauce, although it looks like “a pile of defrosted snow with a pile of bear poop” in it, according to Gordon. The ravioli were defrosted not even 10 minutes prior to making the meal. Obviously, they were store-bought. Gordon sends his server back to ask the chefs if they can even make a ravioli. He only survives one bite.

The ingredients are given to the kitchen, and Trevor is supposed to start preparing pasta under Gordon’s instructions. The meat lasagna is served next, and Gordon notices a big meaty thumbprint on the side of the bowl. The dish is sent back, cleaned, then returned to Gordon. The dish is watery and disgusting, as well as cold in the middle. Gordon can tell that it’s microwaved, and the food is shown to Julie before being disposed of. The spaghetti and meatballs are served, and of course, the meatballs are store-bought. The meatballs taste like warm foam, and the dish is sent back. Clearly, Gordon has his work cut out for him with a dysfunctional staff and a failing restaurant.

Mangia Mangia has closed, although it’s very interesting to see that a restaurant by the exact same name has opened up in Newbury, Ohio. The original Mangia Mangia closed in late 2014, although to nobody’s surprise. Most of the Yelp reviews agree that that the food was inconsistent, took too long, and sloppy/greasy. Julie took an active part in addressing complaints and trying to bring customers back. Prior to closing, Mangia Mangia had an3-star3 star review across more than 25 different reviews on Yelp. Of course, the drive-through window made quite a few appearances in the reception.