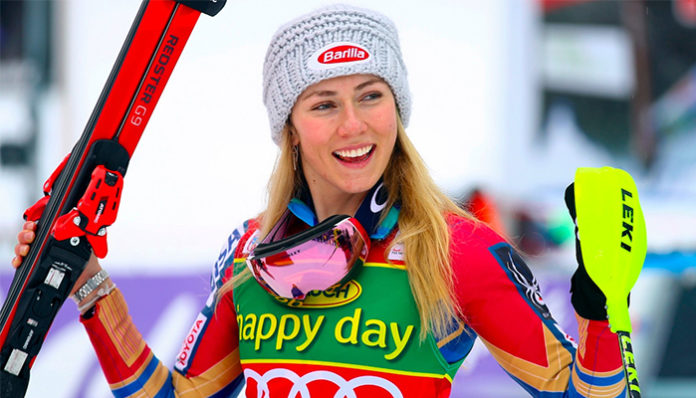 An alpine ski racer, Mikaela Shiffrin is perhaps best known as a member of the United States Ski Team. Talented beyond her years, she has won numerous titles throughout her career so far- for instance, she is currently the reigning World and Olympic champion in slalom.

The youngest skier to have ever won the slalom title in the history of Olympic alpine skiing, she was only eighteen at the time of her win during the 2014 Winter Olympics in Sochi. Since then, Shriffin has continued to compete in several events including the World Cup and Championships. As of 2018, she is in the lead on the World Cup overall standings.

Taking into consideration all of the medals that she’s won over the years, how successful is she? How rewarding has her professional skiing career been? How wealthy is she? From what we can gather, Mikaela Shiffrin’s current net worth hovers around the $5 million mark. Where does her income come from? What are her biggest money makers? Let’s try to figure this out below, stick with us!

How did Mikaela Shiffrin Make Her Money & Wealth?

Born on March 13, 1995, in Vail, Colorado, Mikaela Shiffrin is the second child of Jeff and Eileen Shiffrin, both of whom are former ski racers. Often following her parents to the mountains as a young child, it didn’t take long for her to develop a passion for the sport herself. Before they knew it, she was quickly rising up through the ranks in alpine ski racing.

At the age of fifteen, she participated in her first World Cup event which took place in the Czech Republic. From there, just a few weeks after her birthday, she successfully won the US National Championships, which were held at Colorado’s Winter Park. With that, she became the youngest skier from the US to win the alpine title.

Since then, she has taken large strides in her skiing career- not only did she medal at the Junior World Championships and World Championships (the latter of which she did more than once), but she also won gold at the slalom events at the 2014 Winter Olympic Games in Sochi.

Following that, her gold-medal win garnered her a number of endorsements. In fact, according to various sources, it’s said that she currently earns upwards of $3 million a year form said offers alone. Aside from that, she had allegedly also pocketed a $25,000 bonus from the US Olympic Committee for the win at the Sochi Games.

Assuming that she continues to perform at the same pace, the committee also reported that her earnings had the potential of rising to the ~$50 million range over the next several years. Well if anything, she’s on a right track- this month, she will be competing at the 2018 Winter Olympic Games, where her first race will begin on February 11, 2018.

Outside of skiing, Shiffrin has been involved with a few projects. For instance, she was featured in a TV special called How to Raise an Olympian, which premiered in 2014 on NBC. That same year, she guest appeared on the radio show, Wait Wait…Don’t Tell Me.

Since 2017, the skier has been dating Mathieu Faivre, a fellow skier. Due to the fact that he lives in France however, the two are currently in a long distance relationship.

Does Mikaela Shiffrin Have Any Children?

No, Mikaela Shiffrin does not have any children.

Did Mikaela Shiffrin Go to College?

She currently resides in Colorado, where she continues to train in skiing. Further information/photos are unavailable.

What is Mikaela Shiffrin Famous For?

Mikaela Shiffrin is perhaps best known for being the youngest skier to have won the slalom title at the 2014 Winter Olympics. This month, she will be representing the United States once again at the 2018 Winter Games in Pyeongchang.

She currently resides in Michigan. Unfortunately, that’s about all we have on her location at this time.

What Kind of Vehicle Does Mikaela Shiffrin Drive?

Information on Mikaela Shiffrin vehicle is unavailable at this time.

How Much Money Did Mikaela Shiffrin Make Last Year?

According to various sources, it’s said that she makes ~$3 million from endorsements a year.

As mentioned already, she will be representing the US at the 2018 Winter Olympic Games in Pyeongchang, South Korea this month.

Want to follow the skier on social media? If so, you’ll be glad to know that she’s active on a few platforms- for instance, you can find Mikaela Shiffrin on Twitter at @MikaelaShiffrin or on Instagram at @MikaelaShiffrin. On Facebook, you can also support her on her official fan page here.