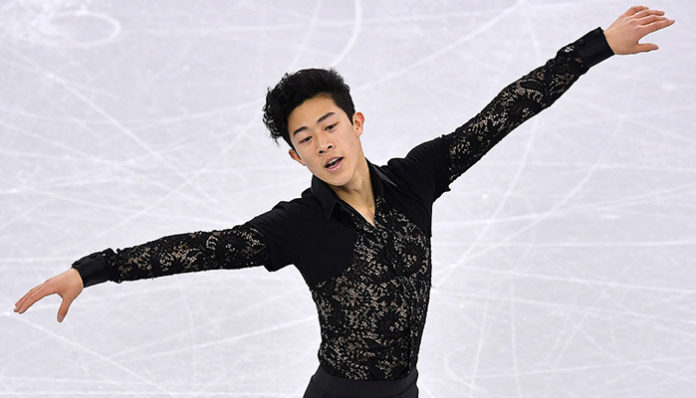 A professional figure skater, Nathan Chen has been skating ever since he was three years old. Since then, he has proved himself to be a worthy contender on the ice- in fact, his skills and talent have led him to win two US National Champion titles over the past two years. Today, he is the only skater to be able to land five different quadruple jumps in competition.

As if that wasn’t impressive enough, he was recently nominated to represent Team USA at the 2018 Winter Olympics in PyeongChang, alongside Vincent Zhou, and Adam Rippon. Young and talented, he might just have what it takes to take home the gold medal.

How successful is the teen financially? How well off is he? Unfortunately, information on Nathan Chen’s net worth is currently not available. Since we’re here though, let’s take a closer, more detailed look at his figure skating career so far.

How did Nathan Chen Make His Money & Wealth?

Born on May 5, 1999, in Salt Lake City, Utah, Nathan Chen is the youngest of five children; he has four older siblings, Colin, Alice, Tony, and Janice. Like most figure skaters, he had started skating at an early age- when he was just three years old. Quickly taking to the ice, he had eventually competed in his first competition by the time he was four.

With lots of practice and hard work, he eventually managed to advance to the junior level by 2011. Coached by Rafael Arutyunyan, he went on to win the 2012 US Championships in San Jose at the age of thirteen. Around that same time, he made his international debut at the Gardena Spring Trophy event held in Italy.

By the 2014-15 season, Chen had moved up to the senior level in the US. That fall, he landed a spot in the 2015 US Championships after winning the senior division at the Pacific Sectional Championships. Despite a heel injury one week before the national championships, he was eventually named for Team US at the 2015 World Junior Championships, where he finished fourth.

A year later, he made his senior international debut- after many hours of working on his 4F and 4Lz jumps. Some of the competitions that he took part in during the 2016-17 season included the 2016 CS Finlandia Trophy, Trophy de France, Grand Prix Final, and NHK Trophy.

From there, he set a new record with the highest scores in US Figure Skating history at the 2017 US Championships in Missouri.

Starting the 2017-18 season with a bang, he won the CS US International Figure Skating Classic that fall, with his first quad loop in the FS. With that, he represented Team North America at the Japan Open, where his free program earned him the silver medal.

After one final performance at the 2018 US Championships, where he successfully performed seven quadruple jumps, he alongside Adam Rippon and Vincent Zhou, where named to Team USA for the 2018 Olympic Winter Games to be held in PyeongChang, South Korea.

No, he is not. In fact, as far as we know, Nathan Chen is currently single and not in a relationship.

Does Nathan Chen Have Any Children?

Did Nathan Chen Go to College?

Due to his hectic training schedule, Nathan Chen has not attended college (though he did recently complete high school). For now, it’s unclear whether or not he plans on continuing his education sometime in the future.

What is Nathan Chen Famous For?

A young, emerging talent from the U.S., Nathan Chen is a strong competitor in the figure skating world. At the age of eighteen, he has already won numerous titles, including two wins at the US Championships.

Nathan Chen currently lives in California, where he continues his training. Further information on his location is unavailable

What Kind of Vehicle Does Nathan Chen Drive?

Information on Nathan Chen’s vehicle is unavailable at this time.

How Much Money Did Nathan Chen Make Last Year?

As mentioned earlier, Nathan Chen will be representing the United States as one of the many figure skaters of Team USA in the 2018 Winter Olympics in Pyeongchang.

Want to follow the figure skater on social media? Did you know that he’s active on a few platforms? For instance, you can find Nathan Chen on Twitter at @Nathanwchen or on Instagram at @Nathanwchen. If you want to support him on Facebook, be sure to drop by his official fan page here.