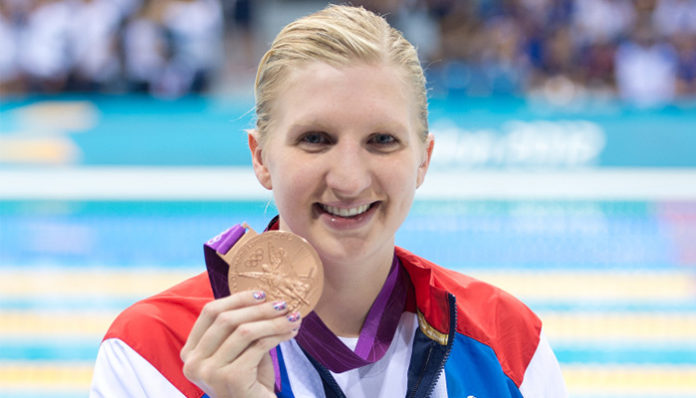 A former competitive swimmer, Rebecca Adlington had won two gold medals at the 2008 Summer Olympics. At her second Olympic Games in 2012, she also received two bronze medals in the 400m freestyle, and 800m freestyle events. From there, she eventually retired from swimming in 2013.

Since her retirement, Adlington has appeared on television numerous times. For instance, she has participated in several reality game shows such as Who Wants to be a Millionaire, Celebrity Masterchef, and Celebrity Come Dine with Me. In 2013, she was also a participant in I’m a Celebrity…Get Me Out of Here!.

What else has she been up to nowadays? What’s her major source of income, now that she’s no longer swimming in the pool? How rich is she? From our research, Rebecca Adlington’s current net worth is around $1.5 million. Where does she earn most of her money from? Does she have any endorsement offers? These are some of the questions that we’ll be addressing below.

How did Rebecca Adlington Make Her Money & Wealth?

Born on February 17, 1989, in Mansfield, England, Rebecca Adlington began swimming at a young age as a member of the Sherwood Colliery Swim Club. With her natural talents, she was eventually chosen for the Nottinghamshire County Elite Squad as a young teen.

After many years of training, Adlington had the chance to represent Great Britain at the 2008 Summer Olympic Games in Beijing. Qualified for the 400m, and 800m freestyle, she went on to win two golds, after breaking a Commonwealth record in the former event. With that, she became the first woman from Britain to win a gold medal at the Olympics since 1960.

The following year, she took part in the 2009 World Championships in Rome. Though she didn’t end up finishing first, she did take home two bronze medals. From there, she went on to finish first on the podium twice at the Commonwealth Games in 2010.

Two years later, she returned to the 2012 Summer Olympic Games held in London. Though she didn’t replicate her previous success for a gold medal, she did win bronze in both the 400m and 800m freestyle events. Not long afterward in 2013, at the age of twenty-three, she announced that she had retired from competitive swimming.

Obviously, she would have earned some degree of prize money from medalling at the above-mentioned competitions. Since her retirement however, where does her money come from? To answer that, she has been working as a swimming pundit for BBC TV for many years. In fact, Adlington has also taken part in several reality shows such as I Love My Country, Who Wants to be a Millionaire, A Question of Sport, and I’m a Celebrity, Get Me Out of Here!.

Most recently last summer, she even participated as a contestant in Celebrity MasterChef.

As far as endorsements go, she has worked with several brands in the past including BMW, Amishi London, British Gas, Boodles, and Aspinal of London.

In 2014, she married a former swimmer named Harry Needs. Following two years of marriage however, they announced their separation in 2016.

Does Rebecca Adlington Have Any Children?

Did Rebecca Adlington Go to College?

Yes, she attended the University of Nottingham.

What is Rebecca Adlington Famous For?

As a former competitive swimmer, Rebecca Adlington is perhaps best known for having won two gold medals at the 2008 Summer Games in Beijing. Four years later, she also finished third on the podium twice at the 2012 Summer Olympics.

She currently lives in the town of Stockport, in England. Photos of her home are not available at this time.

What Kind of Vehicle Does Rebecca Adlington Drive?

Information on Rebecca Adlington’s vehicle is unavailable at this time.

How Much Money Did Rebecca Adlington Make Last Year?

Information on Rebecca Adlington’s annual earnings for 2017 is not available.

As mentioned previously, she recently appeared as a contestant on the on the reality series, Celebrity MasterChef in August 2017. Earlier this year, Adlington was also featured on the talk show, Midlands Today.

Aside from that, at the 2017 World Aquatic Championships, she had also been a part of the BBC presenting team.

If you want to stay connected to the former swimmer, why not follow her on social media? You can find Rebecca Adlington on Twitter at @BeckAdlington or on Instagram at @BeckAdlington.  On Facebook, she also has a fan page, which you can visit by clicking here.