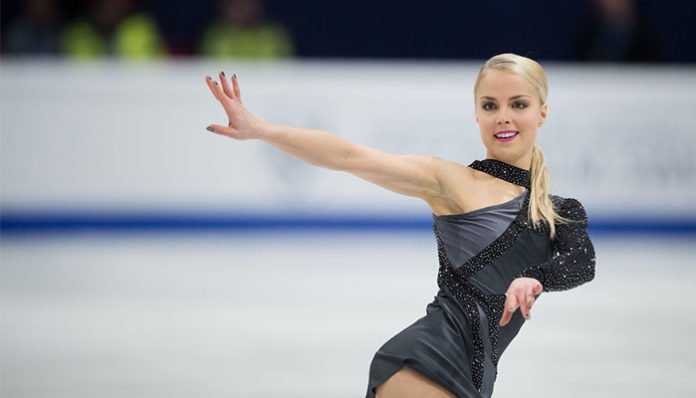 A Finnish figure skater, Kiira Korpi is perhaps best known for having medalled at the European Championships three times. In addition to that, she had also won the gold medal five times at the Finnish National Championships, making her one of the most distinguished athletes in the country.

Despite her success on the ice however, injuries had kept her from competing for two years. Though she initially planned on taking part in the 2015-16 season, she later announced her retirement in 2016, citing that she was “mentally very empty.” With that said, she has continued to skate and perform in ice shows throughout the year.

How is the 29-year-old former skater doing for herself nowadays? How lucrative had her career been? How financially stable is she now? From our research, Kiira Korpi’s current net worth hovers around $500,000. Where did she bank such an amount from? What is she involved with now? We will be exploring some of these issues down below.

How did Kiira Korpi Make Her Money & Wealth?

Born on September 26, 1988, in Tempere, Finland, Kiira Korpi is the daughter of Rauno Korpi, a former ice hockey coach who had taken the Finnish Team to the 1998 Winter Olympics. Following in the footsteps of her older sister, she took up skating at the age of five. Naturally talented on the ice, it didn’t take her long at all to master the basic skills.

As a junior, she competed for the first time at the World Junior Championships in 2003; she was fifteen at the time. By then, Korpi was already able to land triple jumps in competitions. The following season, the skater made her ISU Junior Grand Prix debut, where she managed to take home the bronze medal.

From there, she was eventually assigned to the 2006 European Championships, where she finished sixth overall. With that, the Finnish skating federation named her to the country’s Olympic Team. In the end, she made her Olympic debut in Turin in 2006, where she was 16th overall.

The next season, she competed as a senior for the first time at the Grand Prix. After finishing fourth, just shy of the podium at the Finnish Nationals, she participated in the 2007 European Championships, where her elegance on the ice earned her the bronze medal; this made her the second ladies’ singles skater from Finland to ever medal at the European Championships.

Over the next several years, she continued to work on her competitive programs. Despite her best efforts however, she experienced a number of injuries, including  a metatarsus in her foot, which led her to withdraw from the 2011 Finlandia Trophy and Japan Open. With that said, she did recover in time for the 2011 European Championships, where she won a bronze medal.

After a two-year hiatus, she returned to competition in 2014. Due to illness however, she was soon forced to be off the ice once again. Though she intended to compete in the 2015-16 season, a battle with anxiety ultimately led her to retire from the sport in 2015.

Since then, she has remained involved with skating by performing in ice shows. In addition to that, she has also been working for the Finnish TV Network.

In May 2017, she announced her engagement to Arthur Borges Seppala.

Does Kiira Kopi Have Any Children?

As far as we can tell, Kiira Kopi does not have any children.

Did Kiira Kopi Go to College?

Yes, she attended the University of Tampere in Finland.

What is Kiira Kopi Famous For?

As a figure skater, Kiira Korpi is best known for having medalled at the European Championships three times. In addition to that, she has also won the Finnish National Championships five times throughout her career.

Kiira Kopi currently lives with her fiancé in Finland. Photos of her house are unavailable

What Kind of Vehicle Does Kiira Kopi Drive?

Information on Kiira Kopi’s vehicle is unavailable at this time.

How Much Money Did Kiira Kopi Make Last Year?

Information on Kiira Kopi’s annual earnings for 2017 is not available.

As mentioned earlier, she recently got engaged to her boyfriend, Arthur Borges Seppala last summer.

Want to support the skater on social medial? If so, how about following Kiira Korpi online? You can find her on Twitter at @KiiraKorpi_fi, where she has over 24,000 fans. On Facebook, you can also drop by her fan page by clicking here.