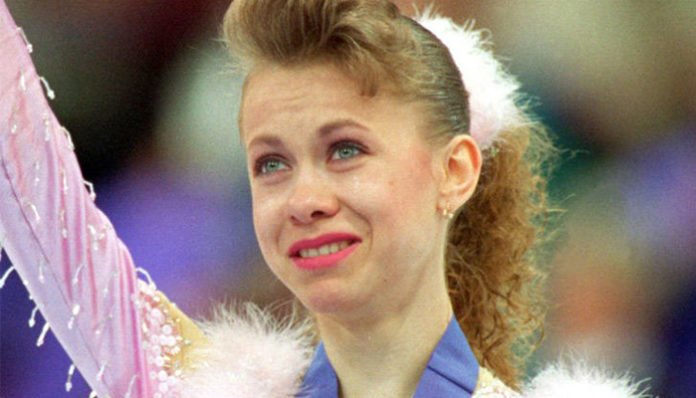 A former figure skater from Ukraine, Oksana Baiul won a gold medal in the ladies’ singles event at the 1994 Winter Olympics. That same season, she had also medalled at the European and World Championships. Despite her talents, however, she chose to retire from competition shortly after the Winter Games.

Following that, she went on to perform in various ice shows, which led her to travel across the United States. In addition to that, he has also made several television appearances over the years; for instance, she had appeared in the reality game show, Celebrity Poker Showdown in 2005.

How is she doing for herself nowadays, now that she’s been retired from competition for over two decades? How lucrative have her other opportunities been? From our research, Oksana Baiul appears to be doing fairly well, with an estimated net worth of $20 million. Where did she earn this fortune from? What projects is she involved with now? Let’s take a look below.

How did Oksana Baiul Make Her Money & Wealth?

Born on November 16, 1977, in the Soviet Union, Oksana Baiul was raised single handed by her mother, as her parents divorced when she was still a toddler. Though she was originally interested in ballet, she eventually took up skating, under the encouragement of her grandmother, who referred to it as “ballet on skates.” Naturally talented on the ice, she later had the opportunity to be coached by Stanislav Koritek, a prominent coach, by the time she was five.

At the age of sixteen, she had made it to the 1993 European Championships, where she finished in second place for a silver medal. During her subsequent performance at the World Championships, however, she crashed into the boards, which caused injury to her neck and back.

Despite that, she managed to come back for the 1994 Winter Olympics the following year. Though she ultimately sustained another injury after colliding with another skater during a practice session, she was able to win the Olympic gold, after receiving two approved injections of anesthetics.

Later that year, Baiul officially announced her retirement from competitive figure skating. Shortly afterward, she signed a multi-dollar contract with the talent agency, William Morris Endeavor. With that, she went on to perform in a number of ice tours, that saw her traveling across the country.

Since then, the former Olympic champion has also made several television appearances. For instance, she had taken part in the game shows, Celebrity Poker Showdown, Celebrity Charades, Master of Champions, and Family Feud. According to her IMDb page, she will also be playing the titular role in the upcoming film, Queen of Ice, the True Life Story of Sonja Henrie, which is currently in production.

As far as other things go, she has also continued to skate in various ice shows- such as Cold as Ice, and Norway on Ice. For a period, she also led the coaching staff at the International Skating Centre in Simsbury, Connecticut.

Since 2015, she has been married to Carlo Farina, her former manager.

Does Oksana Baiul Have Any Children?

No, Oksana Baiul does not have any children as far as we know

Did Oksana Baiul Go to College?

From what we can tell, Oksana Baiul has not attended college.

What is Oksana Baiul Famous For?

Prior to her retirement, Oksana Baiul had successfully won a gold medal at the 1994 Winter Olympics; to this day, that remains to be her greatest accomplishment in figure skating.

She currently resides in Las Vegas with her husband, Carlo Farina. Photos of her house are unavailable.

What Kind of Vehicle Does Oksana Baiul Drive?

How Much Money Did Oksana Baiul Make Last Year?

Information on Oksana Baiul’s annual earnings for 2017 is not available.

As mentioned earlier, it has been announced that she will be playing the role of Sonja Henie in the upcoming movie, Queen of Ice, the Truth Life Story of Sonja Henie, which will be released sometime in 2019. Aside from that, she hasn’t made any recent appearances on television.

Want to follow the former Olympic champion on social media? If so, why not follow Oksana Baiul online- you can find her on Twitter at @OksanaBaiul or on Instagram at @OksanaBaiul. On Facebook, she also has a fan page that you can check out here.