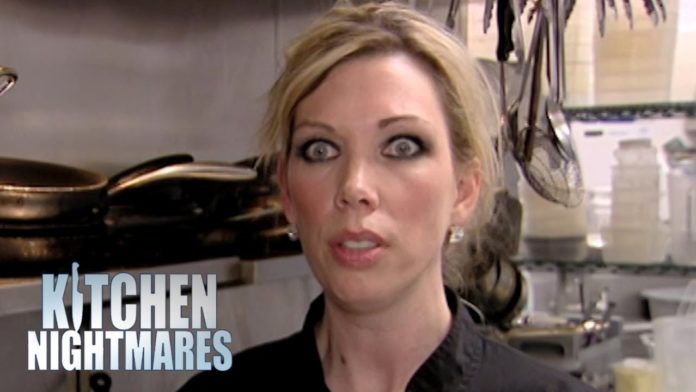 Scottsdale, Arizona, is an upscale Phoenix suburb. It’s also home to Amy’s Baking Company, which was opened in 2006 by the husband-and-wife team, Amy and Samy. Amy had a true passion and talent for anything to do with the culinary arts. So in 2006, Samy invested over $1 million in the restaurant to make Amy’s dream come true. But, in the restaurant business, it’s not all daisies and ponies and unicorns. Approximately two years ago, reviewers and bloggers decided to make up lies and said that the food was disgusting. They lost a tremendous amount of business because of it.

Katy, a food runner, agrees that there are a lot of things wrong with the food that Amy just doesn’t realize. The food is too garlicky, too buttery, too sweet, too overcooked, not done enough – it’s very inconsistent. If someone has criticism, Samy defiantly fights back with them. If anyone tells them that his wife’s food is not good, he tells them never to come back. Not only do they lash out and swear at customers, but they take it one step further and retaliate against the customers.

The customer is not always right at Amy’s Baking Company, and she’s not here to take crap from anybody. The truth is, Amy is totally nuts. One second, she’s like a nice little carebear, and the next, she’s a cruel, evil villain. Unfortunately, the majority of the people in Arizona think that if you attend Amy’s Baking Company, they will scream and yell at them. This “isn’t true.” In fact, Gordon Ramsay is coming to tell Amy and Samy how good their food really is. Katy says that the two are a complete lost cause. 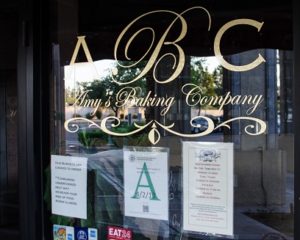 A day before Gordon arrives, the staff spends their day preparing and cleaning the restaurant. In fact, the servers are not allowed to input orders, handle wine, or even manage money. The only one who can do this is Samy. Samy thinks that he’s doing everything all by himself, but he doesn’t realize how badly he’s messing everything up. Amy is only able to cook one ticket at a time (because the restaurant is short-staffed), and only one table has received their food. The customer is dissatisfied with their Caesar salad, and Samy only sasses him.

In fact, the customers can hear Amy and Samy yelling from the back. More food comes out, and the pizzas are not cooked enough. Amy starts to melt down and mentions that there are starving people who could be eating it but they are going to throw it away. Some customers have waited more than an hour and a half, and they just leave. Amy and Samy escalate their fight to a full-fledged blowout, and more and more customers leave. The final straw comes when Samy screams at a customer to pay for the pizza that he ate, then demands him to leave. The customer leaves, and Amy scrambles to call the police. This is after Samy demands him to leave.

The camera and production crew step in to stop the violent scene as Samy stands in front of the door. Amy then tells the customer that “he is a little pansy and a little weenie.” The restaurant is subsequently closed as Amy suffers yet another meltdown.

Finally, Gordon Ramsay has arrived at Amy’s Baking Company. With no knowledge of the previous night’s experience, he enters the restaurant and immediately meets Samy. The desserts all wow him, and he asks to meet Amy right away. The desserts look extraordinary, and none are store bought. In fact, the entire restaurant is beautiful. Gordon is shown to the kitchen, but on the way, Amy herself lets it slip that there is indeed an evil army of online bloggers and yelpers. These people attack them and are used to eating processed wood chips or getting things for free, but Gordon has had enough of her rambling. 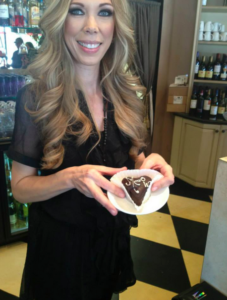 The kitchen is immaculately clean, and it reminds Gordon of a basketball court. The freezer is all sorted and organized, and everything is properly labeled. This is a first for Gordon, and it is even a pleasure. He also meets Miranda, the server for the day. Christine is the sous chef, and Katy is the food runner. Katy opens up that the restaurant is very clean and nice, but Amy and Samy are the problems. Gordon sits down with the husband and wife to ask some questions.

They have been married for ten years (marrying only five months after they met). In fact, Amy prayed for him and God sent Samy, so she wasn’t going to wait. Samy was actually a playboy in Las Vegas. Amy rambles on about their relationship, but Samy lets it slip that he is not trained in the industry. He is skilled in building custom houses, and when the housing bubble burst, he decided to open a restaurant for Amy. This is all Amy has wanted to do. Gordon has been snacking on a dessert the entire time and he mentions how delicious it is.

Amy then makes it clear that if she isn’t present to cook the food, the restaurant is not open. This catches Gordon off guard, and he says it’s no way to run a business. Amy and Samy cannot find qualified people, as everyone just wants a paycheck. Finding suitable personnel is their biggest worry, and all the employees have been dirty and lazy. They have been through “a few hundred employees.” Amy admits that she has problems with customers who are trying to be online bullies who say horrible things. These bullies write that they serve frozen food and that the dough is store bought.

This situation started when one customer, in particular, came in to order a Margherita pizza. Samy asked how his food was, and he said that the pizza was frozen. The next day, that customer wrote the review, and the couple retaliated. They wrote that they thought he was a loser and a moron, but they insulted him first. Gordon explains that you need a thick skin for this business, but Amy loses her cool and rambles on about how you need to “earn your stripes.” 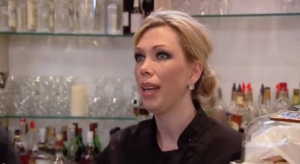 Gordon catches on and says that there is something not quite right. He asks Samy if he is a control freak, which Samy confirms. Amy then brings up the fact that they treat their cats like children, and those cats are their whole life. She speaks “feline.” Gordon simply says, “after meeting you both for the first time, you are both f**king nuts.” Gordon is finally shown to a seat. He immediately asks Miranda if she makes good tips, but she reveals that she only makes hourly. She is the only server in the country that likely does not get tipped. Samy takes all the tips from the service. Gordon appears distraught at this.

Gordon flags Samy down and tries to explain the problem with not tipping your staff, but Samy defends this practice. He wants people who will do their job, and he doesn’t have to interfere. Samy already took three orders by himself and sent them, and he is “doing most of the job.” Gordon orders the prosciutto pizza, a blue ribbon burger (medium-rare), the salmon burger, and the red pepper ravioli. The order is placed, but the story is becoming too clear for Gordon.

Amy believes that one Gordon tastes her food, as a chef himself, he’ll be able to tell that this is what God wants him to do. The fig and pear and prosciutto pizza finally arrives. The crust is supposed to be good, but it simply isn’t crusty or flaky like real pizza. In fact, it’s very, very sweet. The dough is raw. Gordon has waited so long and the pizza has come out half-finished. Samy makes an excuse that he doesn’t believe the pizza came out like this. Amy slowly begins to freak out that Gordon did not like her food. Katy admits that Samy sugar-coats a lot of things in the restaurant. In reality, Samy is trying to protect Amy from the criticism lest she leaves.

Gordon Ramsay has been sitting for 75 minutes, and all he has had is the undercooked pizza. The burgers arrive next, and Gordon immediately points out the soggy bun full of grease. They have a lot of nerve to call the burger a blue ribbon burger, and the burger is entirely raw inside. Grease and fat ooze out onto the plate and Gordon can only manage one bite. The meal is “overcomplicated and unnecessary,” and just a complete disaster.

The red pepper ravioli arrives next (Gordon has been sitting for two hours at this point). Amy is having a full-on meltdown at this point. The salmon burger finally arrives, but Gordon digs into the pasta first. It’s advertised as sweet and spicy, but it is also a mess. It’s “one of the most confused ravioli dishes” that Gordon has seen or tasted in his entire life. Things don’t make sense, as the dish is overly-complicated. Samy didn’t tell him that it was store-bought, which Gordon had asked.

The last item Gordon tries is the salmon burger. It’s more like a crab cake burger, and it’s completely overcooked. It’s not good, and although it may be good for her three cats at home, it is drier than cat food. Gordon confronts Amy, explaining that things took a lot longer than expected and there were a lot of bumps. She says that he looks disappointed, and he says that he is disappointed. On his way out, Gordon tips Miranda with a $100 bill and explains that it’s for her and her only. Samy and Amy retreat to the cooler to have an argument among themselves about how to proceed.

This is the one and only episode of Kitchen Nightmares where Gordon Ramsay flat-out refused to help the restaurant. The argument came to a head when Gordon confronts them about their habitual lying and constant fighting. She has hired and fired more than 100 staff, and Amy retreats into a defense of “stop attacking me” and “I’m going home.” Samy and Amy were both overly aggressive and confrontational and refused to listen to what Gordon Ramsay has to say. Amy blames everybody but herself, and Miranda and Katy have both quit the job. Amy convinces herself that everything she does is perfect in “Amy’s World” (strictly Gordon’s words).

Prior to leaving, Gordon drops a heavy dose of wisdom. He tells the owners that he won’t be able to help them unless they want to participate in helping themselves. If they won’t be willing to listen and try to change than he doesn’t know if he can help them. Shortly after this speech, Gordon stood and promptly left.

It goes without saying, but most readers are aware that Amy’s Baking Company has been closed for a long time. The business was obviously failing due to the horrible food. In a short period of time, Amy’s Baking Company pissed off the entire community and went through more than 100 employees. Prior to closing, they had more than 450 reviews on Yelp to only a subpar 3-star review. Of course, most reviews point out the fact that this restaurant appeared on Kitchen Nightmares. Amy’s Baking Company has its own Wikipedia page, with breakdowns on the synopsis and reception of the episode that features the Scottsdale community’s point of view.