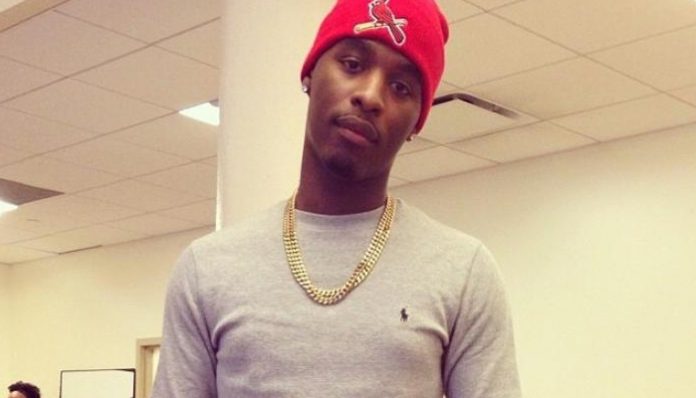 Known for his aggressive delivery, Hitman Holla is perhaps best known for his battle raps against Tsu Surf, Arsenal, and John John Da Don. Throughout his career, he has taken part in many leagues such as the Fight Klub, Battle America, and SMACK/URL. His mottos include “Yett Yett”, and “Ball Game.”

In 2013, he released his debut mixtape, Hitman Ball Game 1.5, which gave rise to tracks such as Hitman and What They On. As far as collaborations go, the rapper has also worked with the likes of Mr. Skip, Kyjuan, Byron Blake, and Yonni, to name a few.

How is the battle rapper doing for himself these days? Has he managed to pull in a decent amount of earnings over the past few years? How well off is Hitman Holla? From what we could find online regarding his wealth, his current net worth is around $300,000. How did he earn this kind of money?

How did Hitman Holla Make His Money & Wealth?

Born on March 29, 1988, in St. Louis, Missouri, Hitman Holla launched his career as a battle rapper back during his college days. A former member of a local gang, he had previously been involved in several drive-by shootings, which had left him with two murder charges, both of which he eventually managed to overturn. Ultimately, it was after that incident that he decided to focus his attention on rap. The older of two siblings, his little brother is incredibly supportive of his work, as is his father, who often attends his battles.

Over the years, he has battled against numerous rappers including Hollow Da Don, Big T, Shotty Horroh, Aye Verb, John John Da Don, and Conceited, among many others. Today, some of his greatest battles include those with Tsu surf and Arsenal.

Aside from his battle raps, Hitman Holla has dropped several singles throughout his career so far; some of these include Diddy Dum Dum, Mean Ones, Good As Dead, and Whitney. In June 2013, he had released a mixtape titled, Hitman Ball Game 1.5. A nine-track project, it boasted many cuts such as Whitney, My City, Sucks For, and What They On. Made available for streaming on Soundcloud, the playlist has already generated thousands of plays on the site.

In addition to his solo records, he’s also collaborated with other artists on a few occasions. For instance, he worked with La4ss on the songs, Reppin’ my Side and Who You Playing Wit and with Yowda on the song, Back in Style.

In terms of income, it’s likely that the majority of his earnings come from his wins as a battle rapper. Having said that, he most probably also pulls in some amount from his singles and mixtapes.

As he continues to grow his fan base by dropping new releases, he’ll gain more opportunities to distinguish himself in the rap scene. Who knows, he might even embark on a concert tour sometime in the near future- we’ll just have to wait and see.

No, Hitman Holla is currently single and not in a relationship as far as we know.

Does Hitman Holla Have Any Children?

He has a son named Geremiah Fulton from a previous relationship.

Did Hitman Holla Go to College?

No, Hitman Holla has not gone to college.

What is Hitman Holla Famous For?

A battle rapper, Hitman Holla is perhaps best known for his battles against Arsonal, Conceited, John John Da Don, and Tsu Surf. In 2013, he released a mixtape dubbed, Hitman Ball Game 1.5, which also drew some attention from fans.

Hitman Holla currently lives in St. Louis, Missouri. Unfortunately, further information on his location is unavailable at this time.

What Kind of Car Does Hitman Holla Drive?

Information on Hitman Holla’s vehicle is not available.

How Much Money Did Hitman Holla Make Last Year?

Details on Lil Hitman Holla’s earnings for 2017 are unavailable at this time.

Though he might not be as active as he was before, the battle rapper had recently dropped a new single titled, Diddy Dum Dum (Feat. Jeff) in 2017. For now, it’s unknown what he has planned for this year.

Want to know what the rapper’s up to? If so, why not follow him on social media? Hitman Holla can be found on both Instagram and Twitter at @HitmanHolla. On Facebook, you can also catch him on his official fan page, which you can visit here.