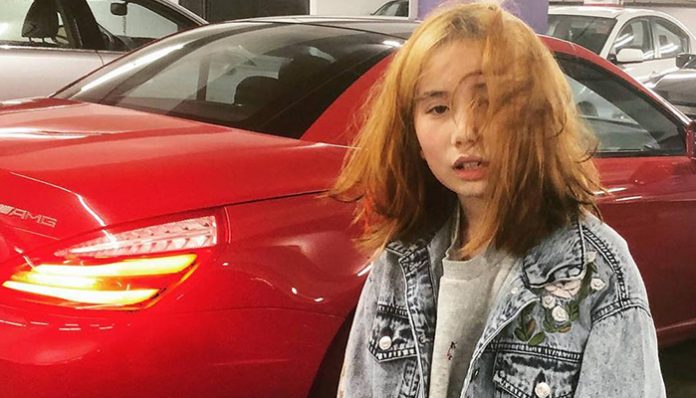 A nine-year-old rapper, Lil Tay recently gained fame after being spotted at the annual Coachella event. An internet sensation, the young star has accumulated well over a million followers over the past year- on Instagram alone, she has over 1.1 million fans. On YouTube, her videos have also earned her over 86,000 subscribers.

Despite her rising popularity however, she has yet to drop any music albums. With that said, she recently revealed that she’s working with Chief Keef on a new song and video, though no official release date has been announced. Can we expect to see anything form the young star by the end of the year? We’ll have to wait and see.

Has she banked anything from her endeavours so far- that is, considering all the attention that she’s received recently? How rich is the 9-year-old? After all, she’s often seen posing with $100 bills on her Instagram account. Since she is technically a child we are basing our figures on her parents net worth determined by her home, vehicles, and other material assets. This projection may vary based on a variety of reasons. Regardless, let’s take a look at what she’s accomplished over the past couple of years.

How did Lil tay Make Her Money & Wealth?

Hailing from Atlanta, Georgia, Lil Tay has been rapping ever since she was seven years old. Regarding her sound, she has described it as a being a “steady flow into the outro.” Self proclaimed “the youngest flexer of the century”, the young lady has collaborated with many celebrities such as Rice Gum, a well-known online celebrity with more than 9 million followers. Despite her recent rise to fame however, not much is known about her personal life (including her real name!).

Earlier this month, she was spotted beside Woah Vicky at Coachella. Since then, she has gained a tremendous amount of attention on social media. On Instagram alone, she has amassed more than 1.1 million followers. Considering her massive audience, it wouldn’t be surprising if some endorsement opportunities were to come up for her in the near future.

As far as other ventures go, she also has her own YouTube channel, which was launched in early 2015. From then until now, she has accumulated over 87,000 subscribers with more than 2.1 million combined views. As of April 2018, her most popular upload, Lil Tay Responds to Rice Gum (Sister Bully) has generated nearly 2 million views. With the views that she receives, she would easily be able to monetize her channel, given that she uploads more videos (so far, she only has two up).

In terms of her music career, she recently shared on Instagram that she’s working on a new song and video with Chief Keef. With that said, no official release date has been announced as of yet.

Earlier this year, she had gained some attention with the release of her song, Money Way, which has since been played over 35,000 times on YouTube.

No, Lil Tay is currently too young to be in a relationship.

Does Lil Tay Have Any Children?

No, this would be impossible as she is currently only nine years old.

Where Does Lil Tay Go to School?

Unfortunately, we do not have any information on Lil Tay’s education.

What is Lil Tay Famous For?

Lil Tay recently gained attention after being spotted beside Coach Vicky at the annual Coachella event. Earlier this year, she also made herself known with the song, Moneyway.

Lil Tay currently resides in Atlanta (presumably with her family?). Unfortunately, that’s all the information that we have at this time.

What Kind of Car Does Lil Tay Drive?

Lil Tay is too young to drive- it will be several more years before she can receive her license.

How Much Money Did Lil Tay Make Last Year?

At this time, we do not have any information on Lil Tay’s annual salary.

As mentioned earlier, the 9-year-old rapper was recently seen at the Coachella event with Woah Vicky. On the music front, she had also dropped a song titled, Moenyway, which has since been played tens of thousands of times online.