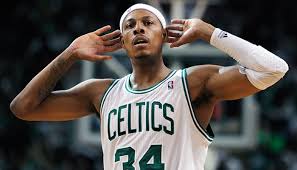 A former basketball star, Paul Pierce spent the majority of his career with the Boston Celtics, with whom he has participated in over 1,000 matches. A small forward, he was nicknamed “The Truth” by sports analyst Shaquille O’Neal in 2001.

After many years of playing on the court, it was announced that he would be retiring following the 2016-17 season. Since then, he has made several television appearances on shows such as Mike and Mike in the Morning, The Jump, Jimmy Kimmel Live!, and NBA on ESPN. Later this year, he will also be starring in a documentary film titled, Inglewood Morning Sessions.

As a professional basketball player, how much did he earn throughout his career? What were the details of his contracts? How rich is he now? As of 2018, Paul Pierce’s net worth is said to hover around $70 million. Below, we’ll be going over some highlights of his career, so stick around.

How did Paul Pierce Make His Money & Wealth?

Born on October 13, 1977, in Oakland, California, Paul Pierce grew up in Inglewood, where he took to sports at a young age. A student at Inglewood High School, he was a star member of the school basketball team. At the age of eighteen, he participated in McDonald’s All-American Game alongside Stephon Marbury, Kevin Garnett, Antawn Jamison, and Vince Carter.

Upon graduating from high school, he was given several offers by some of the country’s top basketball programs. In the end, he chose to play for the University of Kansas, where he studied Criminology. With his tall build and natural talent on the court, he eventually won the “Most Valuable Players” title as a junior in the 1997-98 season. By the end of the year, he was selected in the first round of the 1998 NBA Draft by the Boston Celtics- thus began his professional basketball career.

Within just a few years, his ability to score became apparent. In 2002, he and Antoine Walker had successfully led the team to the playoffs- something that they hadn’t achieved since 1995. By then, he was making well over $10 million a year.

After fifteen years with the Boston Celtics, Pierce was traded to the Brooklyn Nets in 2013. That season, he played in 75 games, where he averaged a total of 13.5 points. Following that, it was announced that he had signed an $11 million deal with the Washington Wizards in 2014. In the end, he stayed for a season, before signing a $10 million contract with the Los Angeles Clippers in 2015.

Three years later, the NBA star signed a one-day contract with the Boston Celtics, which allowed him to retire as a member of the team that he’s played with for over a decade.

Since then, he has served as an NBA analyst for several television programs such as Mike and Mike in the Morning, The Jump, and NBA on ESPN. Last year, he even appeared in a documentary titled, Hoops Africa: Ubuntu Matters. As far as upcoming titles go, he will be making an appearance in Inglewood Morning Sessions sometime later this year.

Paul Pierce has been married to his wife Julie Pierce since 2010.

Does Paul Pierce Have Any Children?

Paul Pierce has three children with his wife, a son named Prince and two daughters named Adrian and Prianna.

Did Paul Pierce Go to College?

Yes, he did. After high school, he chose to play at the University of Kansas, where he studied crime and delinquency studies. Prior to completing the program, however, he was drafted into the NBA in 1998.

What is Paul Pierce Famous For?

A former NBA player, Paul Pierce is perhaps best known for her career with the Boston Celtics.

Unfortunately, information on Paul Pierce’s location is unavailable at this time.

What Kind of Car Does Paul Pierce Drive?

Details on Paul Pierce’s vehicle are not available.

How Much Money Did Paul Pierce Make Last Year?

Last summer, Paul Pierce signed a one-day contract with the Boston Celtics, which allowed him to retire as a member of the team. Since then, he has appeared as an NBA analyst for a few TV programs.

Want to stay connected to the former NBA star? If so, how about giving him a follow on social media? You can find Paul Pierce on Twitter at @PaulPierce34 and on Instagram at @PaulPierce. Of course, he also has an official page on Facebook, that you can visit here.