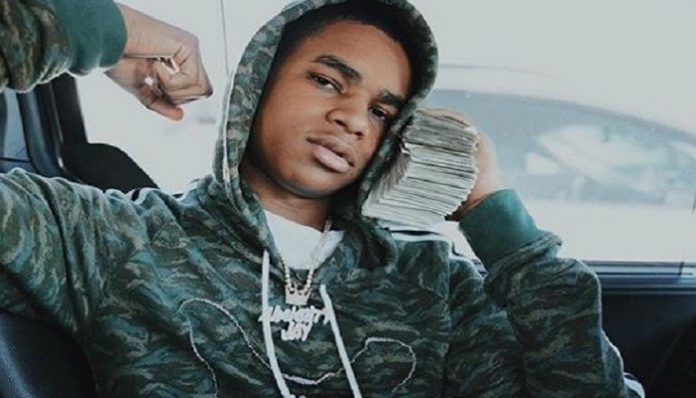 Hailing from Texas, YBN Almighty Jay made himself known in the rap scene with the release of his single, Chopsticks in 2017. Since then he has followed up with several hits such as Off Instagram, Takin Off, Back Quick, and Cash. Earlier this year, he landed a record deal with Rich The Kid’s music label, Rich Forever Entertainment.

Though he has yet to release a studio album, his popularity has been climbing at an extraordinary pace over the past year. For example on Soundcloud alone, the rapper has already accumulated over 25,000 followers (and counting) to date.

Taking into consideration all that he’s accomplished over the past year, is it accurate to say that he is doing fairly well for himself? How much has he pulled in from his records so far? How rich is the 18-year-old MC? Unfortunately for those who are curious, YBN Almighty Jay’s net worth is currently unavailable. In the meantime, let’s take a look at how his career has managed to play out.

How did YBN Almighty Jay Make His Money & Wealth?

Born on August 6, 1999, in Texas, YBN Almighty Jay (Real name: Jay Bradley) has been penning his own rhymes for many years. At the age of seventeen, he began to share his rap videos on YouTube, which drew in a decent amount of fans. Little did he know at the time, however, that he would soon gain mainstream attention with the release of his breakthrough single, Chopsticks later that year.

Released in the fall of 2017, it didn’t take long for Chopsticks to gain buzz online, with millions of streams on sites such as YouTube and SoundCloud. In fact, the accompanying music video has since received more than 11 million views on the former site. Following the success of his hit, he was offered a record deal with Rich The Kid’s Rich Forever Entertainment music label in January 2018.

Since then, numerous songs have been added to the rap artist’s catalog including Takin Off, Off Instagram, Back Quick, and 2 Tone Drip. Earlier this year, he even released a remix version of his breakthrough hit, Chopsticks.

Aside from what we’ve mentioned above, he’s also known for having done several collaborations over the years. For instance, he worked with YBN Nahmir on the track No Hook and with Rich The Kid on Beware.

Considering his line of work, it only makes sense that a portion of his income comes from his musical releases. On top of that, however, the rapper also makes a decent amount from putting on public events. In fact, he has performed a number of shows throughout the country over the past year. Later this summer, he will also be holding a few concerts in Pennsylvania, California, and New York. For more information on the venues and dates, please visit his official Facebook page.

Seeing as how he’s still relatively new in the rap game, its likely that his net worth will continue to increase with time.

Earlier this year, it was announced that he had gotten into a relationship with the model, Blac Chyna.

Does YBN Almighty Jay Have Any Children?

As far as we know, YBN Almighty Jay does not have any children.

No, YBN Almighty Jay has not gone to college.

What is YBN Almighty Jay Famous For?

YBN Almighty Jay made himself known in 2017 with the release of his single, Chopsticks, which quickly went viral on YouTube. Within a month, it had racked up over 4 million views.

YBN Almighty Jay currently lives in Texas. Unfortunately, that’s about all we know at this time.

What Kind of Car Does YBN Almighty Jay Drive?

Details on YBN Almighty Jay’s vehicle is unavailable at this time.

How Much Money Did YBN Almighty Jay Make Last Year?

At this time, we do not have any details on YBN Almighty Jay’s 2017 earnings.

So far this year, he has dropped a few singles including Kush Smoke in the Air, Takin Off, and a remix version of his hit song, Chopsticks. As mentioned earlier, he will also be performing a few concerts in the U.S. later this summer.

What’s the rapper up to? If you’re a fan, don’t forget to follow YBN Almighty Jay on social media- you can find the emcee on Twitter and Instagram at @YBNAlmightyJay. While you’re at it, you can also drop by his official fan page on Facebook.