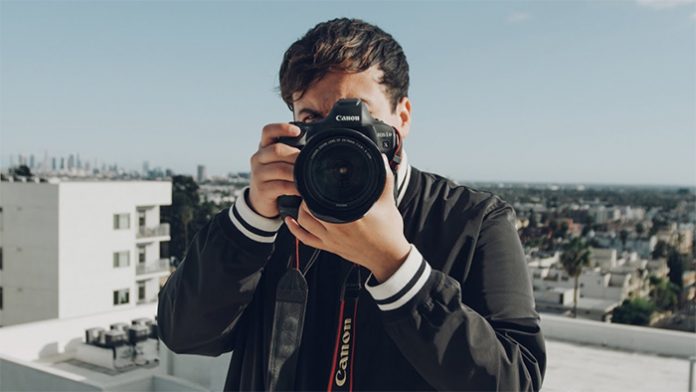 A professional photographer, Bryant Eslava has gained a significant social media following over the past few years. Though he focuses on candid photos and portraits, he has worked with many top brands such as Gap, Armani Exchange, American Apparel, and Puma, among many others. Some of the internet sensations that he’s photographed include Jack Gilinsky, Jack Johnson, and Hayes Grier.

Known for sharing his photos on Instagram, the 25-year-old has amassed nearly 3 million followers on the mobile app alone. As expected, he also has a decent fan base spread out on platforms such as Twitter and Facebook.

How well-paid is the photographer? How much does he make per gig? Considering all the companies that he’s worked with in the past, is it accurate to assume that he’s relatively well off? According to various sources, Bryant Eslava’s 2018 net worth is currently around the $800,000 mark. Interested in knowing more about his career? Keep scrolling down!

How did Bryant Eslava Make His Money & Wealth?

Born on September 10, 1992, in Anaheim, California, Bryant Eslava began to pursue photography at the age of sixteen, after he was given his first DSLR camera by his parents. Before he knew it, he had begun to document his daily life through the lens. With time, what was initially his hobby turned into a full-fledged career. Soon, he was flying back and forth between Los Angeles and New York City for a number of freelance jobs.

After building up his resume, he began to work with several well-known brands such as Armani Exchange, American Apparel, American Eagle, Puma, and Gap. At one point, he even collaborated with VH1 and Instagram. Though it’s unclear how much he’s paid for each gig, it’s likely that his earnings are enough to support his lifestyle.

In addition to having worked with the above companies, he’s also made a name for having collaborated with internet celebrities such as Cameron Dallas, Nash Grier, Jack Johnson, Jack Gilinsky, and Hayes Grier. Known for sharing his work on Instagram, it’s not surprising to know that he’s earned more than 2.9 million followers on the app. Incredibly popular, each of his posts easily receives hundreds of thousands of likes.

A profile of what he’s capable of, chances are, with the audience that he has, he also receives a fair number of endorsement and sponsorship deals on Instagram. Depending on a user’s popularity, it’s not surprising for some to earn tens of thousands of dollars per sponsored post. Having said that, we can only speculate as to how much Eslava has pulled in from his Instagram account.

Though he’s mostly known for his photography work, he has made a few television appearances in the past. For instance, he had appeared as himself in Chasing Cameron, A Netflix original series that centered around social media star Cameron Dallas, in 2016.

As far as other endeavors go, he had designed his own t-shirt in the past, which was available for sale via Represent.com.

No, Bryant Eslava is not married. Having said that, not much has been revealed about his personal life.

Does Bryant Eslava Have Any Children?

No, Bryant Eslava does not have any children that we know of.

Did Bryant Eslava Go to College?

Unfortunately, we do not have any information on Bryant Eslava’s education background at this time.

What is Bryant Eslava Famous For?

A professional photographer, Bryant Eslava has worked with a number of well-known brands such as American Apparel, GAP, Puma, and more. In the recent years, he has also made himself known for his work with internet celebrities such as Cameron Dallas and Hayes Grier.

Bryant Eslava currently spends his time in LA. We do not have any information on his abode at this time.

What Kind of Car Does Bryant Eslava Drive?

Details on Bryant Elsava’s vehicle are not available.

How Much Money Did Bryant Eslava Make Last Year?

At this time, we do not have any information on Bryant Eslava’s annual salary.

Last December, Bryant Eslava captured the heartwarming moments of his friend, Sierra Dallas’s engagement to her longtime boyfriend, Brent Mallozzi. What else has he been up to lately? Updating his Instagram page with new photos, of course!

Are you a fan of his photography? Want to keep up with him? If so, why not give him a follow on social media? You can find Bryant Eslava’s Instagram profile at @Bryant. On Facebook, he also has a fan page, which you can “like” by clicking here.